Mauss takes the mode of drawing, found at the interstices of various media, processes and histories, and dilates, twists, folds, intensifies and loosens those gaps to produce works incised. 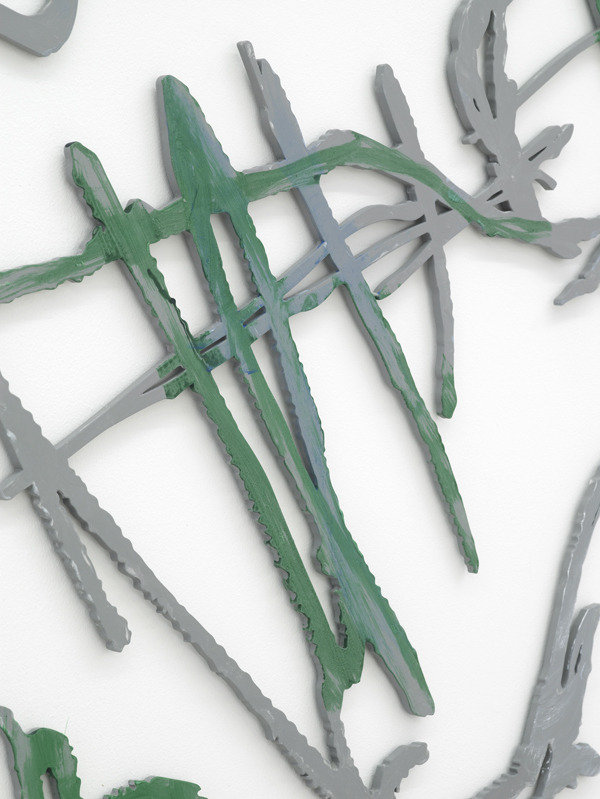 Mauss takes the mode of drawing, found at the interstices of various media, processes and histories, and dilates, twists, folds, intensifies and loosens those gaps to produce a different mode of making art.

For this exhibition, Mauss arrives at works that seem to be oscillating in their own processes, like the irretrievable word throbbing behind the tongue. Various material confusions and shifts of scale describe drawing as an approach in which the distracted motif, and line itself, becomes a material. Here, Mauss takes lines and outputs them as steel filigree, upon which he draws over, again and again, in pastel. The preliminary qualities of a sketch are translated into substance, creating a passage between anticipation and full realization, invention and variation. Works incised into reflective supports (made over the past two years) alternate with new drawings on plaster poured over wire mesh. The exhibition itself is arranged as if by interleaving, where the gallery space has gaps, like the protective blank pages laid between the pages of a book.

The drawing, or study, is the action that comes both before the artwork but also after - as a way of studying or "seeing" the existing artwork, or more generally, things in the world. The simultaneity of before and after happens in the present of a work that is unhinged from a productive process of becoming something else.

Nick Mauss recently presented a new performance work, 1NVERS1ONS, featuring dancers from the Northern Ballet and the National Youth Ballet, with live performances by Kim Gordon and Juliana Huxtable, as part of Frieze Projects, curated by Nicola Lees, in October of this year. His work is currently on view within the Florine Stettheimer retrospective at the Lenbachhaus, Munich and in Portraits d’Intérieurs at Nouveau Musée National de Monaco. Mauss has recently had solo exhibitions at Bergen Kunsthall, Norway (2014); Fiorucci Art Trust, London (2014) and Indipendenza Studio, Rome curated by Campoli Presti (2012). Mauss was included in the Whitney Biennial 2012 and Greater New York 2010, MoMA PS1; and has been in numerous group exhibitions including The Museum of Modern Art, New York (2014); Kunsthaus Bregenz (2013); The Walker Art Center (2011); The Hessel Museum of Art, Bard Center for Curatorial Studies (2010); Kunsthalle Basel (2010); Kunsthalle Zurich (2009) and Le Magasin, Grenoble (2008). Mauss' work is in public collections including The Museum of Modern Art, New York; The Whitney Museum of American Art, New York; The Walker Art Center, Minneapolis; The Museum of Contemporary Art, Los Angeles and FRAC Champagne-Ardenne (Fonds Régional d'Art Contemporain).