'Public Sculptures'. The whole offers a large range of abstract forms moulded in materials making up an almost exhaustive history of the Ronde-bosse, from Antiquity to the Modern Age. 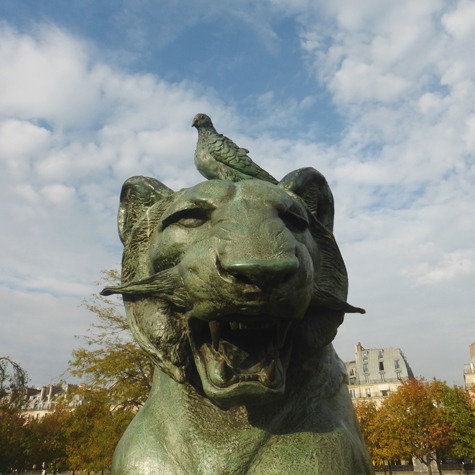 An important body of sculptures is being deployed at Galerie Georges-Philippe & Nathalie Vallois by Julien Berthier under the generic title: Portraits. The whole offers a large range of abstract forms moulded in materials making up an almost exhaustive history of the Ronde-bosse, from Antiquity to the Modern Age. Such a demonstration of creative force will awaken only thin suspicions towards the artist who, in this very same space, presented a patent work for a conceptual art of rapture – in the criminal sense of the word – (A LOST, 2011), for all great artists distinguish themselves by their great deviations. Nevertheless, perplexity will replace surprise when, after measuring the paradox of presenting “interior” works in an exhibition entitled Public Sculptures, we will attempt to bring together each work and its title. A little too baroque and showing too nice a craftsmanship for honest pretenders to minimalism, these geometric abstractions are already perverted by signifiers which escort them, and not the least: Jean Jaurès, Hannah Arendt, Raymond Radiguet. Statuary having had none other noble mission than representing the greats of this world, which allegoric operation will allow us to recognise the author of The Devil in the Flesh in this yellow equilibrist construction made of painted steel, resting on its cylindrical red plywood base? Is the reference to be found in the farce Le Gendarme incompris, or is the argument of the “inspiration of the artist” self-sufficient?

Enough distractions! These forms are tangible, these abstractions are deduced, which is to say false, and these sculptures possess a genuine relation to the public space, or to be more precise, to the pavement. They bear the name of the street where the artist found these piles of dismantled furniture, waiting to be taken away by the bin collectors, while their metal replicas rest against identical reproductions of parking poles. Naturally, this ending does not disturb at all the heritage of the avant-garde whose main gestures we can find here: superposition, displacement of the banal to the artistic, and thus, the conversion of the use value into aesthetic value (voluntarily fostering a double questioning of their criteria), or even urban wandering, without forgetting this insistent nod towards constructivism. Therefore, this way of questioning the intention of public statuary with a cumbersome thing resting against a coercive thing, two objects forcing us to circumvent them, and finally, of crediting himself with the genius of anonymous (unconscious or repressed) sculptors by signing a new sculpture (let’s say one of the third kind), isn’t that a masterstroke? It would be more faithful to the mood of the artist to underline the romantic component of such an ennoblement of two defamed urban realities (concerning their respective relation to order: one being its flouted instrument, the other a sign of transgression), and the political component in this proposition of a public sculpture, mirror of the street, a statuary which we could name as novel realism (so as not to use old catchphrases).

Shared intentions underpin the project Pigeonner (a verb which in French can mean “to dupe someone”). Within the animal category of city pest, its occurrences in public sculptures are far inferior to its demography in concerned sites. Mimicking again the inspiration of the traditional sculptor, the watercolours raise genuine questions of formal and narrative balance within what presents itself as another false answer, although showing a true usurping ambition. The pigeon lands on the wondering Venus’ knee or on the Conquering Lion’s head like the cherry on top of the cake: available in various patinas, these bronze pigeons – which would make up honourable mantelpiece sculptures – offer the sculpture a temporary surplus of realism. They are, within a reflection on the statuary, what the “plus-product” is in the field of marketing (an analogy which cannot overlook the colloquial acceptation of the verb “pigeonner”). In this light, the gesture of the artist would be most appropriate to the public space, by adding something in order to subtract something else, authority for instance.

Conversely, the Corrections proceed by subtraction to offer an aesthetic and pragmatic benefit to the urban landscape, where the artist still intervenes illegally, but an illegality structured by good civic intentions. This considerate vandalism consists in simplifying the disposition of public street signs by taking away superfluous posts. Through this gesture, the ability of the artist to change the world is exercised in an action which changes almost nothing but implies the idea – abandoned by its own instigators – of a possible change, or of a reasonable amelioration. Brought back in the exhibition space, these metal segments evoke probable minimalist sculptures, or even elements of restitution of a site according to the conceptual tradition; which they are. But their first status confer them another layer of value, this time even more political: they are loot.
Julie Portie