A Romance in Five Acts and Twenty-One Englishes. For the exhibition the artist brings together three works in a new, still on-going series on the topic of the future of the English language. 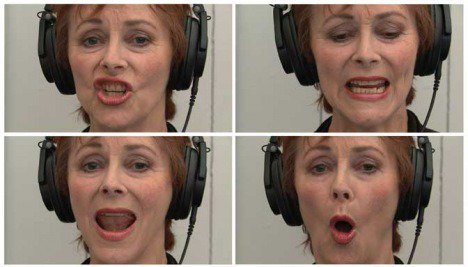 In a solo exhibition at Onomatopee, Nicoline van Harskamp brings together three works in a new, still on-going series on the topic of the future of the English language. In collaboration with art institutions throughout Europe, each work will be conceived as an experiment on the different linguistic phenomena associated with the global use of spoken English, by people for whom the language is not their ‘mother tongue’.

Within van Harskamp’s project is the idea that English, as the dominant language of global capitalism and international politics, is becoming the world’s primary lingua franca at a pace unmatched by Mandarin or Spanish. With non-native English speakers outnumbering English-speaking populations three to one, the idea of a standard version of the language is increasingly devalued. English speakers worldwide adopt multiple ‘Englishes’ towards emancipatory and creative ends.

The exhibition takes on the title of the most recent work, that is based on “Pygmalion”, a story from 1912 by George Bernard Shaw. It that tells of the power relations between language, class and gender: working class girl Liza Doolittle is attracted by the notion that Professor Higgins can raise her social standing by teaching her to speak English like a lady. But entering into a contract with him, she comes under his manipulative powers – not only her diction, but her identity is remoulded, and often against her wishes.

Van Harskamp collected 21 translations of the play and then invited native speakers of each of these languages — from Turkish to Japanese, from Farsi to Czech — to take it in turns to translate it back into English, initially for a live audience at Kunstraum, London. In the exhibition at Onomatopee, recordings from the reading will play alongside ‘reportage drawings’ from the event and a display of the books used for the translation. The transcribed sessions are also brought together in a limited edition book that, by taking on all the idiosyncrasies of the quick-fire translations, suggests what a future English may look like on paper.

When reading the transcribed language in print, this future may certainly seem far off, but read out loud, or re-staged, the proximity to the English that we already hear — and use! — every day, is striking. Nicoline van Harskamp will stage the second act of the book on the opening day of the exhibition. This is a one off opportunity to hear a native English-speaking cast perform a non-native English adaptation of the canonical play.