For the exhibition Rosemarie Trockel presents print works, which are being shown in such diversity for the first time. Trix and Robert Haussmann, the Zurich duo who are architects, designers, and theorists Utilizing the basic geometrical grid that structures the Kunsthaus as their point of departure, they will be inscribing the KUB Arena's coordinates with square mirrors. 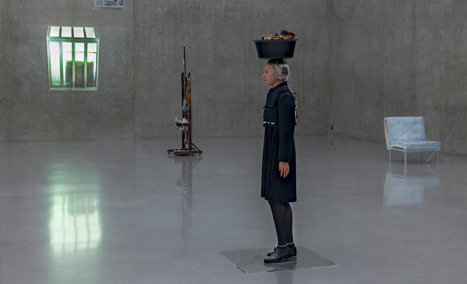 There are only a few artists like Rosemarie Trockel, whose works have always been able to retain their ambiguity in the face of great popularity. In a career spanning more than 30 years, encompassing such internationally renowned exhibition events as documenta (1997 and 2012) as well as the German Pavilion at the Venice Biennale (1999), and which has led the way to the world’s major museums, the artist has succeeded in creating new work complexes, objects and images that are continually surprising. There had already been a great furor in the 1980s surrounding the reception of her wool works, machine knitted woolen fabrics attached to stretchers and then displayed as pictures. In a second group of works she assembled ordinary hotplates on shiny, white, enameled metal panels. Objects with gender specific connotations were again re-contextualized, as had already occurred in the knitted pictures. These abstract works mainly originate from the 1990s and were the ones that secured Trockel’s place in the history of 20th century art.

Rosemarie Trockel, who participated in the group exhibition Love is Colder than Capital in Bregenz at the beginning of 2013, has created a wide-ranging exhibition under the title Märzôschnee ûnd Wiebôrweh sand am Môargô niana më especially for the Kunsthaus.

The cryptic character of this title in Vorarlberg vernacular consciously creates connections to the region, as do some of the exhibits, which were a result of the artist’s sojourn in the area. Fashion, customs, and specific roles that are assigned socially and by gender are reflected in these works, in which the traditional fabrics of the local Bregenzerwälder festive Tracht are recontextualized.

An additional focus of her Bregenz exhibition will be the presentation of print works, which are being shown in such diversity for the first time. In Peter Zumthor’s spaces that shift between cool elegance and the serenely atmospheric, she is also showing another group of works —sculptures that orientate themselves towards furniture, some of them covered in plastic sheeting that conspicuously deprives them of their customary use.

KUB Arena’s 2015 program will be inaugurated by an exhibition responding to the features of Peter Zumthor’s space, by Trix and Robert Haussmann, the Zürich duo who are architects, designers, and theorists. Since founding their »Allgemeine Entwurfsanstalt « (General Design Institute) in 1967, they have been questioning the modernist doctrine of continually inventing the new. In their work they turn to architectural and art history, to extract and update historic models. Evading the dictum »form follows function,« their designs pursue a »critical Mannerism,« permitting them to merge the old and the new, to generate dissent and work with ambiguity, contradiction, and chance. By employing illusionism as a means of material alienation and through the optical dissolution of volume through mirroring, they create complex, illusionary, apparently infinite spaces, furniture, and objects, which humorously undermine the canonization of concepts of value and order. Their interior design for the bar of the Kronenhalle (1965) and the Da Capo Bar in Zürich (1970), their scheme for Galleria Hamburg (1978 — 83), and their redesigning of Zürich’s main station (1987 — 91) are legendary. The fabric collections and furniture they have designed, such as the mirrored New Weissenhof-Chair (1988) or the so-called Lehrstück II (1978), meanwhile rank amongst the most important icons of postmodern Swiss design. Lehrstück II is an interpretation of an antique fluted column that disintegrates into individual drawer segments — one of a total of nine Lehrstücke, in which the form is distorted by function, and which may neither be reduced to one nor the other.
For Reflexion und Transparenz the duo was invited to engage with Peter Zumthor’s architecture using their own formal language. Utilizing the basic geometrical grid that structures the Kunsthaus as their point of departure, they will be inscribing the KUB Arena’s coordinates with square mirrors. These mirrors turned at 45 degrees quote the glass elements of the ceilings on KUB’s upper floors, generating a multitude of virtual fissures within the space.