On view a vast panorama of Florence Henri's photographic production from 1927 to 1940. Taryn Simon presents a collection of works produced since 2000 with a rigorous process of research and investigation. Vandy Rattana exhibits 'Monologue' a serial works straddled the line between strict photojournalism and conceptual practice. 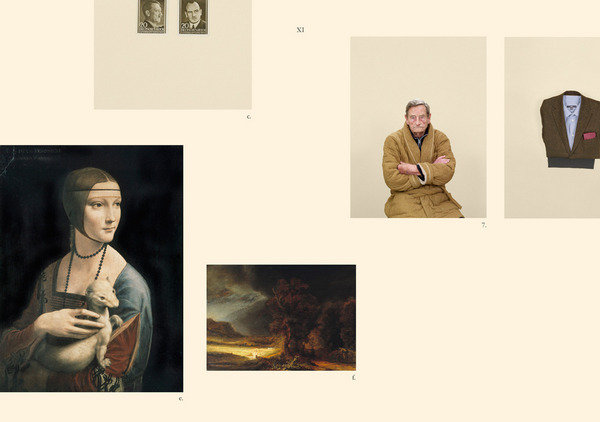 Florence Henri (New York 1893 – Compiègne (France) 1982) was a multi-faceted artist, who was first known for her paintings before making a name for herself as a major figure in avant-garde photography between the end of the 1920s and the beginning of the 1940s. She lived in Silesia, Munich, Vienna, Rome and above all Berlin, before finally settling in Paris in 1924 and devoting herself to photography. This medium enabled her to experiment new relationships with space, in particular by the use of mirrors and other objects in her compositions.

The Jeu de Paume is presenting a vast panorama of Florence Henri’s photographic production from 1927 to 1940, including her self-portraits, abstract compositions, portraits of artists, nudes, photomontages, photocollages, as well as documentary photos taken in Rome, Paris and Brittany. The exhibition comprises vintage prints, various documents and published material.

When she was young, Florence Henri studied music and painting in England and Germany. In 1919, when she was a student at the Berlin Academy of Arts, she made the acquaintance of writer and art historian Carl Einstein and became friends with several figures of the avant-garde, including Hans Arp, Adrian Ludwig Richter, John Heartfield and Lázló Moholy-Nagy. She took classes with Paul Klee and Vassily Kandinsky at the Bauhaus in Weimar. In 1924 she moved to Paris, where she followed classes at the Académie Montparnasse, whose director was André Lhote, then at the Académie moderne (founded by Fernand Léger and Amédée Ozenfant). In 1927, after a visit to Bauhaus in Dessau, she abandoned painting in favour of photography. It was at this time that she produced her famous self-portraits in mirrors and her still lifes; the result of her first steps in the spatial research that she would carry out through the medium of photography.

Between the end of the 1920s and the beginning of the 1930s, three mythical exhibitions in terms of the history of European photography took place in Germany: "Fotografie der Gegenwart" at the Folkwang Museum in Essen (1929); "Film ind Foto" (Fifo) organised the same year by the Deutscher Werkbund in Stuttgart and "Das Lichtbild" held in Munich (1931). These exhibitions bore witness to the rapid expansion of new photographic concepts and a rupture with tradition. Fifo marked the zenith of the Neues Sehen (New Vision) movement of which László Moholy-Nagy was an exponent and "Das Lichtbild" marked the triumph of Neue Sachlichkeit (New Objectivity), whose leading representative was Albert Renger-Patzsch.

Florence Henri was invited to show an important number of prints at these three exhibitions in recognition of her photographic production during this fundamental period that saw the photography used to free our vision and open out onto new experiences.

Florence Henri’s studio rivalled that of Man Ray, even if she had also opened a school of photography where Lisette Model and Gisèle Freund, amongst others, would enrol. In fact, despite the central position that her oeuvre occupied in avant-garde photography at the end of the 1920s, her reputation as a portraitist in Paris, and the fact that her photos had been published in many of the period’s illustrated magazines such as Arts et Métiers and Lilliput etc, Florence Henri’s body of work remains largely unknown.

László Moholy-Nagy’s* comments are a perfect illustration of Florence Henri’s position: “With Florence Henri’s photos, photographic practice enters a new phase, the scope of which would have been unimaginable before today. Above and beyond the precise and exact documentary composition of these highly defined photos, research into the effects of light is tackled not only through abstract photograms, but also in photos of real-life subjects. The entire problem of manual painting is taken onboard by the photographic process and is manifestly given a whole new depth thanks to this new optical instrument. Reflections and spatial relationships, superposition and intersections are just some of the areas explored from a totally new perspective and viewpoint.”

Taryn Simon:
Rear Views, A Star-forming Nebula, and the Office of Foreign Propaganda

Taryn Simon (b. 1975) has constructed an ambitious body of work that is the result of an invisible and rigorous process of research and investigation. Her works combine photography, text, and graphic design, in conceptual projects addressing the production and circulation of knowledge, and the politics of representation. Simon interrogates the power and structure of secrecy and the precarious nature of survival.

The exhibition at the Jeu de Paume presents a collection of Simon’s works produced since 2000. Her earliest series, The Innocents, documents cases of wrongful conviction throughout the United States, calling into question photography’s function as a credible witness and arbiter of justice. She underscores photography’s ability to blur truth and fiction – an ambiguity that can have severe, even lethal, consquences.

In An American Index of the Hidden and Unfamiliar, Simon compiles an inventory of what lies hidden and out-of-view within the borders of the United States. She examines a culture through documentation of subjects from domains including: science, government, medicine, entertainment, nature, security, and religion. In her own words, this work “confronts the divide between the priveledged access of the few and the limited access of the public.” The objects, sites, and spaces assembled by the artist are integral to America’s foundation, mythology and daily functioning, but nonetheless inaccessible or unknown.

Contraband presents an inventory of items seized by American customs officials at John F. Kennedy International Airport, New York. Simon remained on site over a period of five days and four nights, continuously photographing and collecting data on 1,075 objects that were refused entry to the U.S. These images are classified in a manner reminiscent of an entomological collection: placed within Plexiglas cases, they represent an archive of global desires and perceived threats.

A Living Man Declared Dead and Other Chapters was produced over a four-year period (2008-2011) during which Simon travelled around the world researching and recording bloodlines and their related stories. In each of the eighteen “chapters” comprising the work, legacies of territory, power, religion and circumstance collide with psychological and physical inheritance. The subjects documented by Simon include victims of genocide in Bosnia, test rabbits infected with a lethal disease in Australia, the first woman to hijack an aircraft, and the living dead in India. Her collection is at once cohesive and arbitrary, mapping relations of chance, blood, and other components of fate.

The Picture Collection (2013) takes as its subject the New York Public Library’s picture archive, which contains 1.2 million prints, postcards, posters, and printed images. It is the largest circulating picture library in the world, organised according to a complex cataloguing system of over 12,000 subject headings. Since its inception in 1915, it has been an important resource for writers, historians, artists, filmmakers, fashion designers, and advertising agencies. Simon highlights the impulse to archive and organize visual information, and points to the invisible hands behind seemingly neutral systems of image gathering. Simon sees this extensive archive of images as a precursor to Internet search engines.

Simon’s video works will also be on view. The first, Exploding Warhead (2007) shows a test of an MK-84 IM (Insensitive Munition) Warhead conducted at the Eglin Air Force Base Air Armament Center, in Florida. The Air Armament Center is responsible for the development, testing and deployment of all U.S. air-delivered weapons. This film was taken using a remote sequencer that detonated the warhead from a control bunker.
The second, Cutaways (2012), is an absurdist video resulting from a Kafkaesque moment when Simon was being interviewed for Prime Time Russia, a show on the Moscow-based news channel Russia Today. The two presenters, sitting across from Simon, asked her to remain silent for several minutes and stare at them while the scene was filmed for cutaway editing material.
The final video work presents Simon’s earliest film, The Innocents, in which she interviews the subjects of her photographs about the process of misidentification.

The practice and works of Vandy Rattana serve to contradict the images of Cambodia that have been most widely captured and circulated. From the early ethnographic gaze during the French Protectorate to recent decades of war reportage, genocide studies, and cliché’s of tourism, a disproportionate engagement with Angkor Wat and the Khmer Rouge perpetuates a static imaginary of a place and people incapable of continuity.

Born into the tenuous recovery period after the official fall of the Khmer Rouge, Vandy Rattana began photographing as a form of continuity, concerned with the lack of physical documentation of more personal stories, traits and monuments unique to his history and culture. His early serial works straddled the line between strict photojournalism and conceptual practice, and all displayed a preoccupation with the everyday as experienced by the average Cambodian.

Vandy’s most acclaimed work, Bomb Ponds, was made following a transformative encounter with the craters left over from the United States’ bombing of Cambodia during the Vietnam War.
Dissatisfied with the level of documentation on the bombing and its repercussions, the artist turned toward intensive study and scrutiny of the historiography of his country. He traveled to the ten most severely bombed provinces, engaging villagers in locating and testifying to the existence of the craters, and how they are lived with today.

MONOLOGUE offers another portrait of the land, another physical and physiological scar, another silenced aftermath that is given voice.
The only sound in the film —the artist’s monologue— is directed at the sister he never met, who rests somewhere beneath a small, measured plot of land, alongside his grandmother, and five thousand others who were discarded during the Khmer Rouge regime in 1978. Unlike at the tourist site known as the Killing Fields, one does not pay to enter this grave.
There is no signage, no skulls on view, no annual reenactment of killing for spectators. Vandy’s sister’s grave resembles thousands of others around the country as they are today: unmarked, fertile, agricultural land. The film approaches the site by overlapping these past and present histories.

Vandy’s monologue addresses the sister and her absences —a relationship between them that never was, the unknown location of her bones beneath the ground, her unidentified soul, her unknown characteristics based on the one photograph that remains of her, which we never see. His tone oscillates between calm and hysteria. Before surveying the parched, dry season ricepaddy grave, Vandy establishes two noble mango trees as witnesses.
We learn how, saplings in 1978, these trees were fertilized by the thousands of dead, growing large to form a rich habitat for birds and a rare shade for farmers.
We learn of the taste of their fruits and perfect paring with fish, the smell of their flowers.
Just as these details begin to confusingly assuage a palpable trauma, a trio of farmers imitates a rice planting and harvest as the monologue meditates on the farmers’ daily life, and on the absurdity and inevitability of violence and obscurantism.

MONOLOGUE turns silent as the artist enters the image to gather souvenirs from the earth and trees, which we learn were offered to his parents to vague reception.

The artist’s dramatic voice and the dream-like sequences in MONOLOGUE counter that of the journalist, that of the official Khmer Rouge trial testimonies.

When violence can no longer be seen, Vandy complicates our perception of its aftermath with intimacy. What is reconciliation? Is continuity memorial enough?

MONOLOGUE destabilizes time, the distance of history, bipolar ideas of justice, the possibility of logic, and of peace.
It becomes difficult to continue gazing at this history as if it belongs to others.