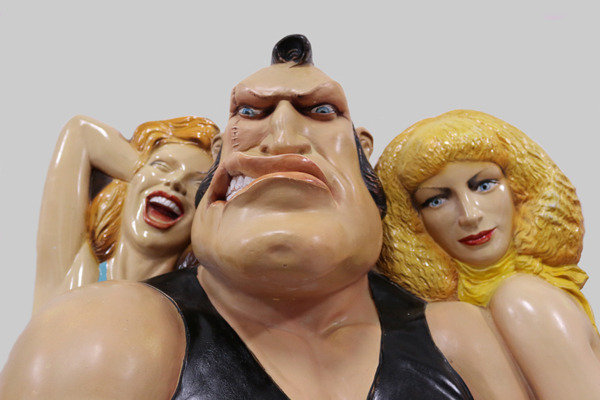 For her third solo show at Galerie Georges-Philippe & Nathalie Vallois, Spanish artist Pilar Albarracín continues her insatiable exploration of the meanderings of yesterday and today Seville, her birthplace where she still lives and works. For more than twenty years, she has been dissecting the traditional figures of Spain, with works never deprived of caustic humour. Through a great variety of expression modes, such as performances, videos, installations and photographs – which she makes the most of – she questions the patterns of cultural identity, as well as the notion of genre and the feminine identity.

Pilar Albarracín today resumes her ferocious yet sweet attack in a new ensemble of works inspired by popular celebrations. During the Feria de Abril in Seville, a vast and ephemeral compound is erected to entertain youngsters and adults. It is named after the deafening noise made by the rides, la calle del infierno, hell’s street. Pilar Albarracín re-appropriates and gives life to two of these machines: one represents an animal recurrent in her works, the bull, the other represents a stereotyped vision of the macho man, Mr Muscle. Both colourful strength games invite the gallery visitors to an unusual fight: may the strongest win, in a burst of strident and electronic sounds. Suddenly the mechanical cogs make themselves more pernicious. The game, which measures physical strength, implicitly determines archetypes of force and weakness. The fun fair appears both as a place of entertainment and as an opportune place for the divulgation of human quirks. Pilar Albarracín, a moralist as penetrating as Francisco Goya, hands to her fellow citizens a mirror of their own humanity.

The fun fair, this world of machines, also implies the staging of bodies. The source of the entertainment rests on the gap with the norm: before, in street parties, the public would be amazed by freak shows full of monstrous bodies. In a series of drawings inspired by the experience of the distorting mirror, Pilar Albarracín questions the potentialities of a self-centred laugh, only partly hiding the reaction towards what is strange and different.

The artist likes to tackle stereotypes and this is what makes her embroidered series, which have accompanied her throughout her artistic journey, even more interesting. Pilar Albarracín prolongs her reflexion on appearances in the feminist connoted and ornamental universe of textile works. This is where the artist spreads her flame. In fact, one of her last series is dedicated to flames of pyrotechnic visions. These embroidered works are inspired by the colourful explosions of fireworks and of other illuminations found in popular celebrations, in Seville or elsewhere. This sky set on fire pushes the public to look up to the firmament, while their feet walk through Hell’s street. Such works deliver a kaleidoscopic vision of entertainment and weave links between the sacred and the profane.

At the Théâtre National de Chaillot, images of religious fervour, always in the context of Andalucía’s folklore, constitute a corollary to the profane jubilation found in the works presented at Galerie Georges-Philippe & Nathalie Vallois. Pilar Albarracín takes over the theatre space for the second flamenco Biennale. An essential part of her work dedicated to dance is presented through a selection of videos. The choreographic dimension of religious rituals, such as they are deployed in the streets of Seville during the Holy Week, works as a background for her new creations. The installation El Capricho (2011) thus reconstitutes one of the altars traditionally carried during procession. Pilar Albarracín operates a subtle inversion: this support of faith is hung upside down from the ceiling. This gesture could appear as blasphemous. Yet solemnity and mystery emanate from the work. The objects the artist creates, appropriates or transforms, are just as many
milestones in her questioning of community and its foundations, but also reflect on the role of tradition in a contemporary society in constant mutation.

In our project space, Patrick Jackson presents Shelving Unit, a freestanding shelf composed of glass and matte black, plastic columns. Each column is shaped like a square morphing into a sphere, set between sheets of glass and alternately rotated, resulting in pillars reminiscent of Brancusi’s Endless Column. This version of Shelving Unit is stocked with brand new sneakers.

“I think of these shelves as machines, indifferent to what they hold. Cold, precise, modular, they can be configured to accommodate any object: small, medium or large. Products will change over time, but these structures are indifferent, ready to present whatever comes along. I imagine them in great numbers, filling a department store of the future, or some Sci-Fi version of one. A mass produced army, offering objects as incessant as the columns that support them.”

The series of Shelving Units – also sometimes named as Tchotchke Stacks – has been running in Patrick Jackson’s work since 2010, giving the artist a pretext to exercise his avid practice of collector. But the goal, here, is not the search of taxonomy or an inventory, but to create equilibrium.

The searched result, accentuated by the use of the glass material, is of a “semantic vacuum”, a feeling of nothingness rather than specialness, of fragility and defamiliarization that brings the work in the conceptual and emotional fields rather than in the material or technical ones.

Other series by Patrick Jackson, using terracotta and ceramics for example, confirms the orientation visible in the Shelving Unit series: how to integrate the formal interrogations of Modernist sculpture in a mundane context, without versing into the Aesthetics of Pop Culture?

Patrick Jackson (born in 1978) earned his BFA from the San Francisco Art Institute (2002) and his MFA from the University of Southern California (2007). He lives andworks in Los Angeles, CA.