This thematic exhibition concentrates on works from the Arte Povera movement and parallel practices, which are central to the museum's collection since its founding years. This makes it a highly appropriate subject for The Museum of Contemporary Art in its 25th year. 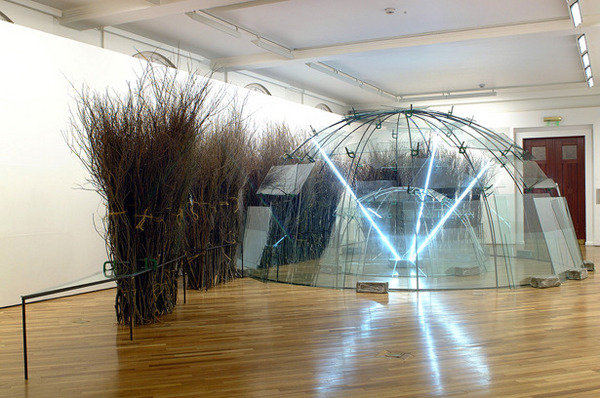 This thematic exhibition of works from the collection concentrates on the arte povera movement, which is central to the museum’s collecting policy. This makes it a highly appropriate subject for this exhibition, twenty-five years after the Museum of Contemporary Art first opened its doors. The museum’s collection started out with 2,500 works from the period after 1945 that were transferred from the National Gallery and Riksgalleriet (Norway’s touring art gallery). It now contains more than 5,000 items by Norwegian and international artists.

This is the last time these treasures will be displayed in the venerable, former Norwegian Bank building, prior to our move to the new National Museum at Vestbanen. In addition to the many arte povera works, the exhibition includes examples of related contemporary practices such as conceptual art, land art and post-minimalism. It also features recent works that illustrate how the art debates of the 1960s have influenced younger generations of artists.

Viewers will have the opportunity to become reacquainted with Gilberto Zorio’s installation Untitled (Canoe), a curious amalgamation of energy, alchemy, bubbly chemistry and insistent sound, as well as Michelangelo Pistoletto’s notorious installation Image and Body, consisting of old museum furniture that has been turned upside down. The audience will also be able to experience Mario Merz’ beautiful igloo, a large glass and neon installation with fragrant twigs.
Poor Art

The basis for Arte Povera was furnished by the political protest movements of the late 60s – student revolts and civil rights efforts, and a general opposition to consumerism and the increasing commercialisation of the art world. The term arte povera was introduced by the Italian art critic Germano Celant, who organised the exhibition “Arte Povera – Im Spazio” together with a small group of young Italian artists in 1967. Artists such as Michelangelo Pistoletto, Giovanni Anselmo, Pier Paolo Calzolari, Jannis Kounellis, Giulio Paolini, Guiseppe Penone, Gilberto Zorio and Mario Merz represented something new and groundbreaking. With an artistic practice closely related to American conceptual art, anti-form and process art, they exploited contemporary forms of expression such as happenings and installation art to the fullest extent.

The approach taken by Arte Povera artists was at once conceptual and sensual, poetic and earthy. Their themes and comments included past and present, nature and culture, and “high” and “low” art. A number of these works had a particular appeal to the senses: smell, touch, light and temperature. The artists worked with various different materials, combining industrially manufactured objects such as neon lights, glass and clothes with natural organic materials such as vegetables, living animals, earth, fire and water. Arte Povera is neither poor nor impoverished art, but art created in complete freedom and openness regarding materials and processes.
Rich Legacy

Arte Povera’s conceptual views, approach to materials and working processes have influenced contemporary artists for the past 40 years. This is reflected in the history of the museum’s collection, which includes both acquisitions of significant Arte Povera works, as well as related practices within land art, post-minimalism and conceptual art. The rich legacy of Arte Povera’s influence resonates clearly in a number of more recent Norwegian and international works of art. A walk through the exhibition will allow the audience to experience the museum’s Arte Povera works, and compare and discover parallel practices such as Camilla Løw’s and Kristina Bræin’s play with minimalism, Ida Ekblad’s sculptures assembled from found garbage, the “formlessness” of Camilla Wærenskjold and Jeannette Christensen, and a critical and conceptual approach in the works of Matias Faldbakken, Gerard Byrne and Mario García Torres.
Permanent installations