Drawing for Alessandro Pessoli is a daily event, a near obsessive activity that has formed and defined his art since the very beginning. But Pessoli approaches drawing with an open mind. For him, everything is possible. Martin Maloney is one of the new breed of artists who writes, curates and talks about art. For this exhibition he will show new collages using paper and vinyl and pen & ink drawings 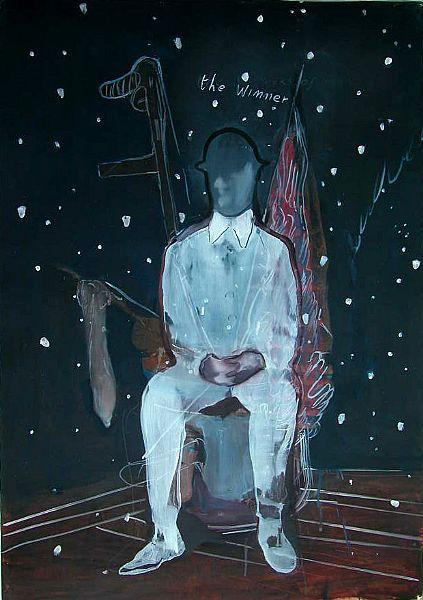 Drawing for Alessandro Pessoli (born 1963, Cervia, Italy) is a daily event, a near obsessive activity that has formed and defined his art since the very beginning. But Pessoli approaches drawing with an open mind. For him, everything is possible.

He experiments with images and materials, freely exploiting each uncontrolled and unexpected effect. Using aquarelle, ink, tempera, oils and enamel paint, he depicts scenes from life and does not hesitate to expose himself in the process. At the same time he maintains a certain distance and builds resistance in order to dramatise and ridicule each image. Pessoli emphasises the influence comic strips have on his work: ''There is one aspect in particular of comic strips that interests me'', he says, ''that of humanizing any kind of image, of resisting deformation without losing credibility.'' Pessoli chronicles an emotionally deep and symbolic world, in which he and his characters continuously search for truth and the meaning of life, struggling with questions of identity and destiny.

In ''Void Winners'', Pessoli draws and paints in a combination of oils and enamel paint on large sheets of paper. The twelve drawings are portraits of long-suffering, somewhat grotesque warriors. Lying hidden within each is a portrait of the artist himself. In their strange military accoutrements they resemble clumsy Don Quichotes, comic idealists situated within a tragic story. Despite the ludicrous atmosphere and the dark theme, these drawings have an elegant beauty and a rich sensuality. Pessoli controls colour and line like an old master. With the right figurative details and zones, flecks and shades of colour, he achieves an individual dynamism in each drawing.

In Pessoli's sculptures we also find the same artistic quality, the same attention paid to traditional skills within a contemporary context. Like fellow countrymen Lucio Fontana and Piero Manzoni, he regularly visits the town of Albisola on the Ligurian Riviera to work with local potters. Pessoli's painted Majolica sculptures express his universe in a sensual, tangible form, enhanced by all the fine qualities that accompany the medium. The seven laconic Majolica ''Void Winners'' bear traces of the clay modelling, accentuating the contrast between the soft material and the hard shiny varnish applied on it, creating an intense play of cavities and shapes, colour and matter.

Martin Maloney was born in London in 1961. He is one of the new breed of artists who writes, curates and talks about art. Graduating in 1993 from Goldsmiths College, Maloney identified a newly emerging group of diverse artists, organising a series of group exhibitions in his Brixton home cum gallery, 'Lost in Space' and later ''Die Young Stay Pretty'' at the ICA in 1998. But it is his work as an artist that most fully expresses Maloney's ideas. His work was shown at ''Sensation'' at the Royal Academy of Art which also travelled to Berlin and New York. He also featured in the Saatchi Gallery's exhibition 'Neurotic Realism' in 1999 and 'New Labour' in 2001. Martin Maloney lives and works in London.

For this exhibition Martin Maloney will show new collages using paper and vinyl and pen & ink drawings. He has written the accompanying notes for the exhibition:

Pastoral Painting
'Intrigued by the small scale figures frolicking in 18th century French pastoral paintings I pictured that world today in a night club, a popular sunbathing spot, an upmarket outdoor music festival and a shabby suburb of North West London. Drawing on the look of contemporary people and titled after real places potential lovers court; watched by secretive on- lookers, a wedding party is in full swing, people enjoy music and poseurs and lounge lizards stare out from large snap shots paintings that capture an endless summer of happy memories'.

Drawing From Life
'My recent experiences teaching in art schools stirred up memories of the humour and terror of the life classes I took in preparation to become an artist. Interested in the institutional banal of the classroom, I have expanded the focus to include not only the model but also the set ups and the interaction between the different types of people that attend art classes. I have drawn attention to an attempt to create the exoticism of Nice or Morocco in a corner of a room with a few props.

Sex Slaves
'Sex Slaves' pictures the ritualised procedures and equipment of S/M role play and how the behaviour of the dungeon is deflowered by domesticity of furniture, bed linen, wallpaper, plants and pets. I have tried to imagine what it would be like to re-enter the disjointed and clashing interiors of an early twentieth century Intimisme appealing in it's decorative qualities startling in it's subject matter'.

Flowers
'In 1995 my first professional works were a series of oil paintings of flowers and often I employ a floral motif in describing a textile or place a plant in a drawing or painting and I wanted to return to flowers as a subject in their own right in vinyl collage'.

Methods and materials
'The material is sign maker's vinyl cut and stuck onto to plasticated canvas stretched like a painting. The paper collages are made from sheets of paper painted with gouache, which is cut and glued. The historical precedent I am exploring is the fluid drawing and hard edged technique of Matisse's cut-out. I've drawn on his interest in pattern and flatness, explored Albers chromatic contrasts and clashes. Alex Katz early collages from the 1950's have also inspired me'.