1978. This exhibition will consist of drawings on paper and wall along with new sculptural works. Urquhart was the man behind the seminal nightclub 'The Beautiful Bend' along with DJ Harvey and Sheila Tequila. 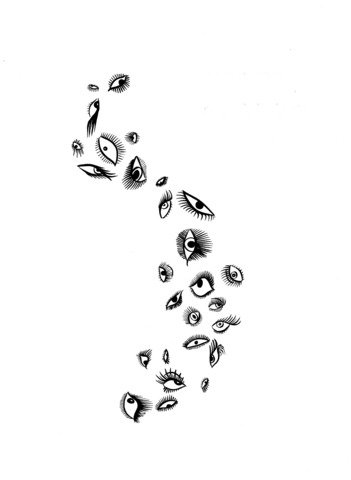 Maureen Paley is pleased to announce the third solo exhibition at the gallery by Donald Urquhart.

This exhibition will consist of drawings on paper and wall along with new sculptural works. In 2012 Donald Urquhart participated in a residency as part of Cité International des Arts, Paris.

Paris is a shrine to history. Perhaps that is understating things. I lived on Montmartre, itself the tomb of many martyrs who died trapped and murdered within its gypsum mines. At its foot is Cimetiere Montmartre, resting place of Nijinsky, Degas, La Gouloue, Delibes, Cadinot and Dalida. Dalida also has a bronze bust at Place Dalida around the other side of the hill. It was right there that I lived. Daily I would pass the small crowds of tourists who paused to have their photos taken as they fondled her impressive breasts for luck. Their guides would relate the story of the Disco Queen and her suicide. Strangely – or perhaps Frenchly – in 1997 Dalida became only the third woman to have a statue erected to her in France, the others being Joan of Arc and Sarah Bernhardt. This information was not something I heard from the guides. I did overhear one guide listing all the artists who died from alcohol poisoning on Montmartre and was heartened to discover that although La Gouloue had died that way it was not until she was sixty three.

My garden was full of hemlock and nettles, an ideal home for destructive European Gypsy moths. The males would fly in and rest in my atelier, wandering over my drawings and sleeping on the cool plaster walls. They were not around when I was working on the Loie Fuller costume, which might have been a bit much for them. It is made from 35 metres of light pongee silk, two layers of five or seven circles hand-dyed in an ombre of pale rose, old gold, yellow and violet. It has been paraded through Venice and Paris, deepest Galloway, the stage of the Theatre Royal Dumfries and was last swirled in DJ Harvey’s disco tent at ‘Meltdown’ on the South Bank. It must never be washed and I am surprised that it bears few stains.

Working with Mr. Pearl means working to the beat and swish of disco. The vintage year was 1978. The Beautiful Bend (DJ Harvey’s favourite record and name of our club) came out that year. One night I think I was talking to Pearl about reincarnation – or maybe it was one of those “which decade would you have liked to have lived in” games. He said “I’d rather be a tiny goldfish swimming inside the perspex heel of a platform shoe on the illuminated dancefloor of Studio 54 in 1978.”

From the guano of history there are diamonds of disco in that year. I regarded my clubwear and salvaged scraps of disco decor as being the guano of history as they clogged up my London flat. Once I tried to chuck a load of it out when I did a Beautiful Bend party at the ICA. To my horror Les Child and Roy Brown had bagged loads of it up and bundled it into the taxi with me. “You can’t throw that away. It’s history,” they said. When I moved to Paris I had a clean fresh break from living with my history. To my horror my friend Dean Bright sent me a package of old Beautiful Bend ephemera. History had followed me to my future! Those old stained scraps of yesteryear. Actually I was glad to have them as Pearl was thrilled to see them again. I decorated my hallway for a party with A3 photocopies of Beautiful Bend drawings along with Parisian themed work. To a soundtrack of disco I made yards and yards of black crepe paper chains. Perhaps dramatically I regarded these as giving an impression of the guano of disco decorations past that had choked my London flat, or the hand-made hell of clutter that festooned the Beautiful Bend.