A project by Gintaras Didziapetris with Elena Narbutaite' and Rosalind Nashashibi, a solo show of Khvay Samnang and a selection of artists' books from the collection of the CAPC. Other parallel events will include a performance of the choreographer Alexandra Bachsetzis, and a lecture on Jodorowsky's invention of Panic Theatre by Marielle Pelissero. 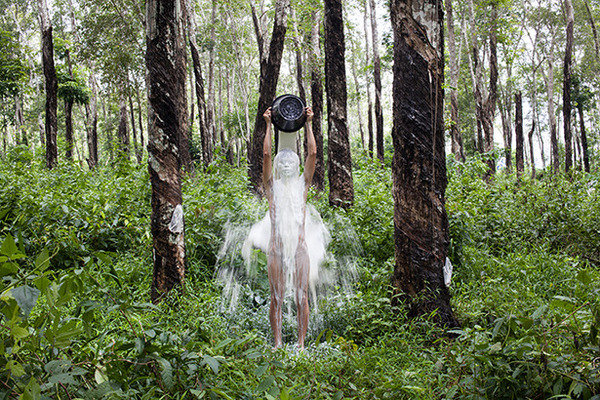 Album, an exhibition specifically designed for the Galerie Ferrère at CAPC musée d'Art Contemporain de Bordeaux, features a group of works by Gintaras Didžiapetris together with selected works by Elena Narbutaitė and Rosalind Nashashibi, invited by the artist to take part in the show.

The exhibition’s title riffs on albumen prints, a photographic printing method invented in France in the nineteenth century. Thanks to the use of egg whites (albumen), it enabled the transfer of images from photographic negatives onto paper. During the second half of the nineteenth century, albumen printing became the most widely used reproduction technique and, since then, collections of images (or songs) are known as “albums.” Similarly, the exhibition functions as a set of images displayed along the Galerie Ferrère, which has been turned into a single open space without dividing walls. Visitors can walk through it as a flattened space, which Didžiapetris understands similar to a hand fan, a device that allows one to open and show the images all at once through a single gesture of the arm.

Including photography, projections, illustrations and objects, Album brings together a diversity of images, all of which ponder their own looks, role, their modes of life, and their power to inform, transport and travel. While some works are unique, others are more ubiquitous, mass produced, but they are all processes or nomadic, temporary entities operating through reactivation, updating and transformation of machinery and systems that support them. They are products of reciprocal relationships of time, places, and the subjective beholder.

The first chapters of this exhibition were presented as Audi Fantasy (2014) and Port Authority (2015), in Pavilion, Leeds, and MARCO Vigo, respectively. Album, a new interpretation of this project, has been adapted for the CAPC musée d’art contemporain de Bordeaux. On the occasion of the exhibition an artist’s book titled House, featuring a sequence of photographs and drawings, will be published and will be available at the CAPC bookstore.

The Exhibition Khvay Samnang : Rubber Man, is a part of “Enter the Stream at the Turn“, curated by Erin Gleeson for the Satellite Programme 8.

The Satellite programme 8 « Enter the Stream at the Turn » is co-produced by the Jeu de Paume, Paris and the CAPC musée d'art contemporain de Bordeaux.

Following on Khvay samnang’s previous works such as Untitled (2011), and Where is my land? (with nget rady) (2014), rubber man (2015) confronts a contested landscape with poetic resistance. For over one year, Khvay samnang repeatedly returned to ratanikiri, cambodia’s northeastern highland province, to survey the altered environment—From the remaining villages to the strategic clearings, from rubber tree saplings to mature plantations. His three-channel video installation frames these landscapes, in which the artist pours fresh liquid rubber over his body, then sets about walking in and out of the rational cash crop lines, as if a lost specter.

As the forest disappear, Khvay Samnang asks, where will the spirits live ?

Khvay Samnang (born 1982, Svay Rieng; lives and works in Phnom Penh) has a multidisciplinary practice between photography, video, performance, and installation. He approaches news sources and everyday life, attuned to unresolved stories that he believes require intervention, even if only symbolic. With subtlety and often humor, Khvay offers new interpretations of history, contentious current affairs and longstanding cultural practices. His recent exhibitions in 2014 include the IV Asian Art Biennale, Taiwan, IV Singapore Biennale, and IV Moscow International Biennale for Young Art. Khvay is a Prudential Eye Awards Finalist for Best Emerging Artist Using Photography in Asia (2015). He is a resident at Bethenian Kunstlerhaus, Berlin (2014-2015).

Hors Texte
a selection of artists' books from the library collection of the CAPC musée
Curated by: Cyril Chaumeau

Be it book-object or book-shaped sculpture, the artist’s book has made it possible to reconsider the traditional ways of creating and diffusing art. It appeared in the 1960s, so is a recent form of artwork in which the artist uses the scriptural medium to produce a fully-fledged work. In the guise of an ordinary book, the artist records an action, keeps the trace of a concept, and develops an alternative and specific project where aesthetic refinement can also have its rightful place. Since the CAPC’s founding, it has incorporated the book object in its collections; it thus seems crucial to offer the public a selection of the quintessential publications to be found in the museum’s Library.

Based on an initial collection set up in 1974, while the CAPC was being installed in the Entrepôt Lainé, the Library was created in 1990 with the second phase of the site’s renovation and rehabilitation work. It is at once part and parcel of a policy aimed at forming a documentary collection, and of one offering visitors to this young contemporary art museum a space dedicated to current artistic activity and research alike. Since the Library’s creation, it has acquired more than 40,000 books about contemporary art, photography, architecture and design. Entirely devised by the interior designer Andrée Putman, it provides its users with a reading room accessible by appointment in which people may consult its many volumes solely on the spot.

This important collection provides unwavering support which the institution has enjoyed in its acquisition of quality books—because the Library is regarded as a museum tool which must perforce be promoted and enhanced by successive management teams. In order to represent the CAPC’s memory on a step-by-step basis, the production of scriptural media has always been part of the institution’s life: for the first show at the Centre d’Arts Plastiques Contemporain, Regarder Ailleurs, in 1973, a first catalogue was distributed. This publication, conceived as an extension of the exhibition, marked the birth of the Bordeaux art centre’s publishing policy. Since then, the CAPC has been consistently publishing books and producing by-products to accompany its exhibitions, increase knowledge about the artists exhibited, and promote the vitality of this cultural establishment. As a result, 187 catalogues have been published since 1973.

This priority given to the written word is also asserted in the wish to produce books freed from the conventional format of the exhibition catalogue. So the year 1983 saw the creation of the first artist’s book for the CAPC, first by Hamish Fulton, then at intervals of a few months, by Sol LeWitt. Today, this goal endures among artists exhibited at the CAPC, such as Markus Schinwald and Aaron Curry, who have both elected to produce an original edition in order to distinguish and perpetuate the trace of their passage in the Bordeaux museum’s monumental venue.

The artist’s book—“somewhere between the aesthete’s refinement of the book-lover and the ordinariness of the book designed for everyday consumption”, as Anne Mœglin-Delcroix* so aptly defines it—now has a particular status at the CAPC. It has enjoyed a regular budget since 2009, and this collection is also being put together through exchanges, gifts, production and editions. Hors texte thus exhibits the key pieces of this documentary collection, which is such a one-off in France, while at the same time paying tribute to the artists who have come and enriched the CAPC’s collections, and thus contributed to the place’s legend.