The exhibition brings together artists from different countries and global regions whose work investigates the relation between space and politics. The main topic of the presented works is the phenomenon of disputed territories, and of border zones in a state of constant instability and open conflict. 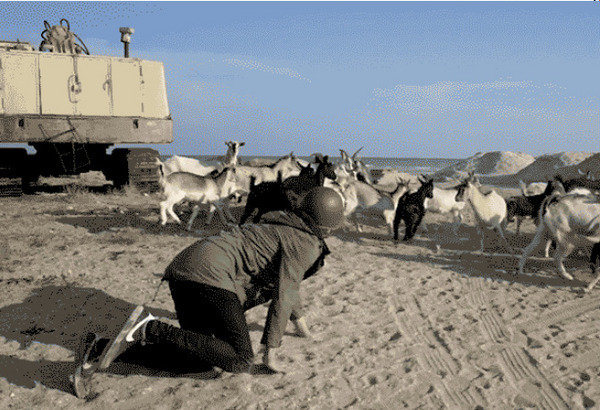 The exhibition Our Land / Alien Territory brings together artists from different countries and global regions whose work investigates the relation between space and politics. The main topic of the presented works is the phenomenon of disputed territories, and of border zones in a state of constant instability and open conflict.

Today, after the collapse of neoliberal theories on the evolution of the system of international borders and the disappearance of the concept of the national state, we are witnessing the growth of nationalist movements—and with it, instances of the violation of the territorial integrity of countries.

One relevant example recently concerned the accession of Crimea into Russia, which has resulted in tectonic shifts in the global geopolitical landscape—a high profile case, but by no means the sole precedent in international practice. While the global political map is violently changing on all continents and in different regions, the specifics of each instance are similarly determined by the local context.

The territories that these artists consider are different but share common traits: the tense dynamics of the border space, political instability, and contradictory national identity. On this land it is very hard sometimes to draw any boundary between what is ours and what is theirs, and whether this is the border of a physical space or an "imagined community."

Despite their marginal status and geographical remoteness from global centres, problems appear on our land/alien territory which are relevant today for all modern states: namely, how is the identity of the nation structured? How does the collective imagination function? How is the actual topography related to the people's ideal image of themselves? How do geopolitical concepts form the boundaries of our daily space and state borders?

The 20th century engendered numerous territorial disputes, some of which were primarily attributable to the postcolonial legacy of countries that had received long-awaited independence, and others due to a whole range of problems related to the self-identification of nations. The projects by Amar Kanwar, Sophie Ernst, Shilpa Gupta, Shezad Dawood, Tenzing Rigdol, Shahzia Sikander, Tiffany Chung, and David-Perez Karmadavis are related to this topic.

An important landmark is also played by the formation of the State of Israel. As a result, a permanent hotbed of geopolitical tension appeared in the Middle East. This is recounted directly or indirectly in the works by Lawrence Abu Hamdan, Mehreen Murtaza, and Nira Pereg.

The collapse of the Soviet Union was one of the major political events of the late 20th century. The states formed after this collapse have tried to draw borders based on the boundaries of ethnic communities, an idea that has frequently failed. Authors from the former USSR and Russian regions have focussed on this topic—Stefan Rusu, Aslan Gaisumov, Sitara Ibragimova, Taus Makhacheva, Yerbossyn Meldibekov, and Kristina Romanova.

A similar redefinition of borders also happened in certain parts of Eastern Europe—the space of former Yugoslavia, which experienced all the horrors of war, being perhaps the most dramatic example. The problems of this region are conceptualised by Maja Bajevic, Albert Heta, Anja Medved, and Danica Dakic.

It also goes without saying that a number of projects are dedicated to the conflict in Crimea: the works by Sergey Bratkov, Elizabeth Hoak-Doering, Igor Muhkin, and Dan Peterman.

Image: Mehreen Murtaza, The Dubious Birth of Geography, 2008–12. Installation of 15 photographs. © the artist.