Messages from a New America. This edition of the biennial is dedicated exclusively to art from Latin America, searching for its roots and presenting a new curatorial model that goes against the grain by including works from the early 18th century to the present. The Biennial consists of 7 major exhibitions interconnected. 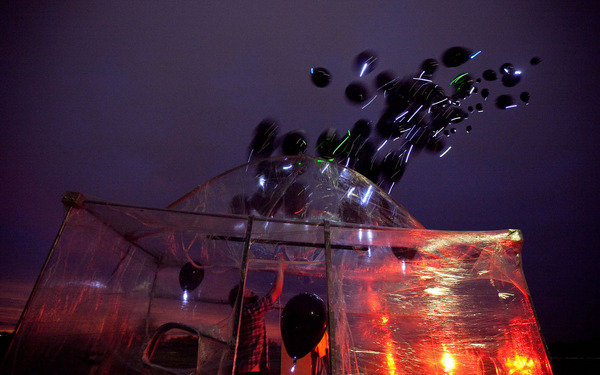 The 10th Mercosul Biennial has opened to the public in Porto Alegre, Brazil, and runs from October 23 to December 6. This edition of the biennial is dedicated exclusively to art from Latin America, searching for its roots and presenting a new curatorial model that goes against the grain by including works from the early 18th century to the present. Titled Messages from a New America, this large-scale exhibition seeks to break new ground on shifting the attention to innovative curatorial platforms for the art of Latin America. The 10th Mercosul Biennial is curated by art historian and curator Dr. Gaudêncio Fidelis (Brazil), Chief Curator Márcio Tavares (Brazil), Adjunct Curator, Assistant Curator Ana Zavadil (Brazil), and Educational Curator Cristián G. Gallegos (Chile).

The Biennial consists of seven major exhibitions, interconnected and built to encompass a number of issues concerning the art of the region, some of which are dealt with for the first time anywhere, such as smell and dust as material reality of the art objects. The exhibitions are: The Biography of Urban Life; Modernism in Parallax; Neobaroque Anthropophagy; Olfactory: Smell in Art; Body Apparatuses; Dust and the World of Objects; and Marginália of Form. The Biennial occupies several venues throughout the city of Porto Alegre, including the Rio Grande do Sul Museum of Art, Santander Cultural, Mercosul Museum of Human Rights, Usina do Gasômetro, CEEE Cultural Center, Acervo Independente, and InstitutoLing.

"This biennial represents a unique opportunity to view a vast range of work alongside each other and introduces a new model for exhibitions within a biennial context. It was created by choosing specific works, encompassing an extensive arc spanning from the historical to the contemporary. Instead of representing artists, we sought to highlight their artistic contributions related to specific issues," says Mr. Fidelis.

"This platform abandons the model of commissions that is typical of biennials and focused instead on searching for works that show the extraordinary field of aesthetics that appears throughout the historical trajectory of creativity that brings forth sources for innovation and creativity. The exhibition takes into account legibility, cultural specificity, historical priority and criticism of the Western canon, thereby reactivating, producing and circulating original knowledge about these works instead of just celebrating them."

The curatorial platform of the 10th Biennial includes canonical and non-canonical works, as well as works considered by the curators as "blind spots" due to a conspicuous absence from criticism, art history narratives and curatorial endeavors which have failed to take such works into account.

An important emphasis of the Biennial is placed on the educational programming. Titled Possibilities of the Impossible and run by Mr. Cristián G. Gallegos, the Educational Curator, it is conceived as a place of experimentation, seeking to build specific experiences through works of art, activities with artists, special dislocations, points of reflection, encounters and workshops. The educational program will introduce a pedagogical stance called the Dialogante ("the one who dialogues"), which enables the audience to learn and experience with the aim of building a critical inclusive process as a way to involve the public as participants in the field of art and education to which they are invited to take part.

With 646 works by more than 200 lenders, the exhibition also includes an Experimental School of Curating, which will run for one month, with lectures and workshops by specialists from various fields of exhibition making from diverse countries from Latin America. The exhibition is accompanied by an extensive publication program, including the catalogs of the exhibition, a publication about the educational program, and another one on issues of contemporary curating.

The Biennial is organized by Fundação Bienal do Mercosul, a private non-profit organization from Brazil. Its mission is to develop artistic and educational projects in the field of visual arts, encouraging dialogues between contemporary artists and communities.