The Ludovico Treatment will be familiar to readers of Anthony Burgess's A Clockwork Orange, as the experimental aversion therapy undergone by Alex, a young hooligan recently incarcerated for murdering an elderly lady, who is offered a reduced prison sentence for agreeing to submit to an intense, visually disturbing barrage of projected images accompanied by a soundtrack of Beethoven and Handel. A group exhibition curated by David Hunt. 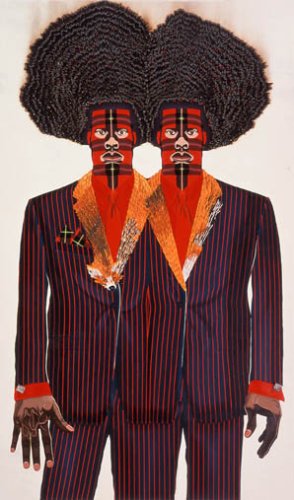 an exhibition curated by David Hunt

The Ludovico Treatment will be familiar to readers of Anthony Burgess's A Clockwork Orange, as the experimental aversion therapy undergone by Alex, a young hooligan recently incarcerated for murdering an elderly lady, who is offered a reduced prison sentence for agreeing to submit to an intense, visually disturbing barrage of projected images accompanied by a soundtrack of Beethoven and Handel. More memorable, perhaps, is Stanley Kubrick's 1971 film adaptation, where Malcolm McDowell, playing the charismatic, yet remorseless Alex in his trademark bowler hat, suspenders and jackboots, is strapped into a dentist's chair as a team of government technicians in white lab coats peel back his eyelids with forklike calipers, attach electrodes to his body, and pump a nausea inducing serum into his bloodstream while vignettes of gang rapes, Nazi beatings, and laughing Japanese soldiers torturing prisoners loop endlessly in a darkened, movie theater-like setting.

The ostensible goal of the Ludovico Treatment is to render Alex incapable of thinking of a future violent act without experiencing extreme bodily discomfort. Henceforth, all anti-social thoughts will be inextricably bound up with the catalog of 20th Century horrors he is forced to watch, and, moreover, traditional existential nausea (always a curb to appetite) is replaced here by actual gut-wrenching, vomit-spewing physical nausea brought on by the serum. Rather than rehabilitating Alex by showing him the error of his ways, the Ludovico Treatment, in short order, eliminates AlexÂ¹s free will and renders him as incapable of enjoying Beethoven's 5th Symphony (previously a personal favorite) as he is of committing the least aggressive act. Subtle conditioning by association, the grail of Western Civilization or 'improving culture,' is hijacked here by the politically scheming Minister of the Interior and his team of social-scientists to become a form of brainwashing mind-control: instantaneous, cost-effective, and with 0% recidivism. Not only is AlexÂ¹s waking life held in check by the treatment, but his dreams -- when crude or lascivious -- force him to wake in a confused, panicky sweat.

Cut to CNN, the History Channel, The Sopranos, Six Feet Under, Nip & Tuck, Crime Scene Investigation, Court TV, The Passion of the Christ, City of God, and Abu Ghraib. It is my contention that the current morbid fascination with extreme spectacles of violence, torture, incarceration, interrogation, humiliation, surgical invasion and eviscera is beginning to seize contemporary art, for better or for worse, in two ways: 1) work that mirrors elements of the grotesque, the erotic shading into the pornographic, or the sense of claustrophobic helplessness induced by a purely visual landscape of infantile titillation and adolescent destruction as convenient as a trip to Blockbuster video or a downloaded mpeg, and 2) the formalist exhaustion of modernist tropes to the point where only an extreme Baroque aesthetic can be heard over the din of competing media. This exhibition, The Ludovico Treatment, seeks to address these two (not mutually exclusive) strains.

Douglas Fishbone's video, Everybody Loves a Winner (2004), narrated in the quizzical, nebbishy voice of the artist, is a montage of images downloaded from the web that features trepanation, a dwarf in diapers, an actual 'frog king,' Clinton shaking Sharon's hand, soldiers beating civilians, discredited scientific theories illustrated with maps, various polytheistic idols and trinkets, Heaven's Gate cult members, and jokes about the 'agnostic, dyslexic, insomniac.Â² Fishbone's video, in it's jarring juxtapositions and matter-of-fact tone, is closest to BurgessÂ¹s actual aversion therapy, but it's lighthearted manner of skeptical inquiry is more thought provoking than soul killing.

Jeff Sonhouse's painting of a pin-striped street pimp with a flared out afro of burnt match sticks embodies the baroque aesthetic of Picabian appliquÃ©, extreme color, menacing mug-shot portraiture, and blinged-out wardrobe and body decoration familiar to viewers of American Pimp, the Players Ball, early blaxploitation movies like Shaft, or simply anyone who has strolled the inner city boulevard late on a Friday night.

Chris Larson's video of a double-decker wooden cybernetic machine resembles a torture device from the Spanish inquisition as much as it does a kind of body-building apparatus from an earlier era of physical culture crossed with a Wilhelm Reich Orgone Accumulator. Bladders are pumped full of oil and viscous goo as the machine spins around on its axis headed toward sexual climax or mechanical failure, depending.

SunTek ChungÂ¹s slick C-prints scramble Asian stereotypes in excessively constructed tableaux of imaginary identities. Here, the Korean-American photographer has outfitted himself as a cricket player in a kung-fu ready pose. He stands in front of a Pagoda altar tricked out in a pleasant Laura Ashley print, clutching his bat like a kendo sword. Worlds collide, not least the neo-colonial sport of cricket with the pop-imperialist fascination in all things Hong Kong action. Chinese, Japanese, Korean, American, Indian, and Pakistani: Chung is a nun-chak thumping photographer in high Pentecostal fever. In a second photo, he poses as a ninja in a customized Burberry robe, sitting lazily in front of a cash register in what appears to be a Korean bodega. Throwing stars, or Â³shurikenÂ² act as abstract decorative motifs rather than tiny airborne missiles designed to stop your adversary in his tracks. Think Jet Li or Jackie Chan forced to fill in for their absent mother, while dreaming of a full spread in Black Belt magazine or a star vehicle opposite Jean-Claude Van Damme.

Tamara Zahaykevich builds executive desktop-scaled paper and cardboard sculptures that at first glance look like architectural maquettes for one of Zaha HadidÂ¹s early exploding Suprematist cities. Like Lebbeus WoodsÂ¹s fractal notebook drawings or Kurt SchwittersÂ¹s Merzbau, planes seem to intersect each other at odd angles, cutting off pedestrian routes and preempting any thoughts of a utilitarian program. Advanced Pantone color schemes clash to create jarring points of density and weight, further removing each piece from any thoughts of mass production, Donald Judd-like seriality, or industrial finish-fetish. Total idiosyncrasy seems to be the norm for each unique piece.

Ernest Jolicoeur and Dan KoppÂ¹s abstract paintings, like ZahaykevichÂ¹s sculpture, both trade in irradiated color schemes that seem to suggest a post-industrial future electrified by Starburst, Bubblelicious, or Fruit Loop-flavored colors. Both exalt the high end of the Crayola spectrum, to say the least. Jolicoeur, using a carpenterÂ¹s router, carves into the wood support of his paintings to add an extra heavy metal dose of gestural physicality. Kopp, for his part, tweaks and hallucinates grottoes, caves, and makeshift shed structures to create dripping cloistered fantasias in blisteringly hot acrylics.

Kanishka Raja's ink drawings conflate the space age bachelor pad's over-the-top interiors (familiar to anyone who has picked up Wallpaper* magazine in the past 5 years) with Op-Art pattern and decoration reminiscent of Bridget Riley and Victor Vasarely's retinal explosions. Less interested in optical illusion for its own sake, Raja mixes and matches fur, wood, formica, and marble, extracting their surface essence to create a Baroque encyclopedia of planar surfaces. Ceilings, floors, walls, doors, and windows cease to signify as such and become mere backdrops for the superimposition of his personal cut-and-paste pattern database.

For more information, please feel free to contact Laurie De Chiara or SÃ¶nke Magnus MÃ¼ller at the gallery under: +49-30-390 320 40