Tamara Horakova + Ewald Maurer, Judith Huemer, Walter Mirtl, Wolfgang Reichmann, Geert Saman. The works of the six artists all share material and haptic qualities as well as an examination of the medium's surface as such and what is concealed beneath and/or behind it. Skepticism of the realistic rendition of things is thus expressed, stressing that these have another, mysterious side to them that need to be uncovered 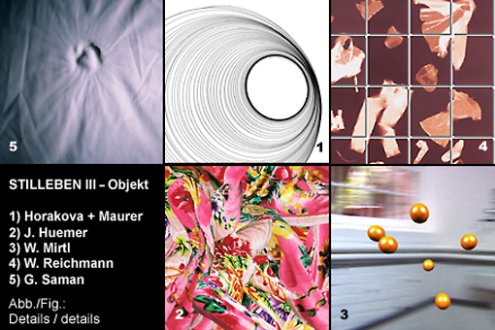 Following "Arrangement" and "Interior", "Object" is the last of the three group exhibitions of this yearâ€™s focal theme "Still Life".

The works of the six selected artists all share material and haptic qualities as well as an examination of the mediumâ€™s surface as such and what is concealed beneath and/or behind it. Skepticism of the realistic rendition of things is thus expressed, stressing that these have another, mysterious side to them that need to be uncovered. It is exciting to observe, on the basis of the five different artistic positions, how the artists view their medium as a challenge. Precisely with photography and video, which are the most strongly connected with reality among the media, an attempt is made to reveal to the world that which is actually not visible. At the same time, through various artistic means, the viewer is thrown back again and again to the surface of the two media, as if the objectsâ€™ secrets are only to be suggested and not revealed.

Three of the participants focus on carpet-like surfaces:

Judith Huemerâ€™s (A) large pictures are overwhelming at first sight with multicolored patterns of stately swung draperies; at second glance, concealed parts of the body can be recognized under the cloths. As with baroque art, ornamentation and figure are interwoven with one another.

Wolfgang Reichmann (A) calls his 36-part photographic work "Patchwork". The technique of the photogram used lets the clothing articles appear as in an x-ray and thereby lends them a floating ease â€“ like angels in an old ceiling painting.

Geert Saman (B) seems to photograph picture-filling material. Through the modulations of the surfaces through light and shadow, it is as if he would like to draw a secret from the folds.

Tamara Horakova + Ewald Maurer (CR/A) transfer the photographed article, a photo paper roll, into the two-dimensionality of the surface. Through the choice of the perspective â€“ the front of the roll is seen as a ring, and by concentrating on the black-and-white contrast, the crumpled up paper unfolds as an independent existence that seems to vibrate to and fro in the space.

In short videos, Walter Mirtl (A/B) produces a planar effect through a staccato-like cut and a rapid change from always two picture sequences. What is interesting here is how movement is thereby reversed and even living organisms assume an object-like character.