From Vincent van Gogh to Jeff Koons. Flowers are welcome adjuncts to our daily lives. And thanks to their availability and incomparable beauty, they have always been a favorite artists' motif. But what happens when this apparently all too charming motif of flowers collides with the radical art of modernism? In a comprehensive special exhibition comprising a good 160 works, the show will look into this question, taking account for the first time of the entire modern period from Impressionism to the present day 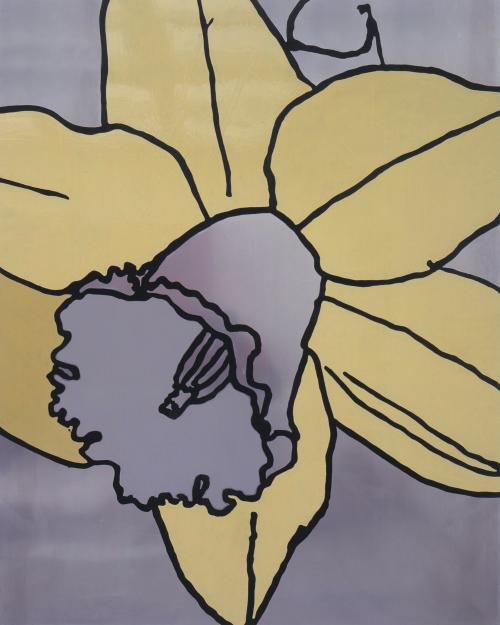 Flowers are welcome adjuncts to our daily lives. And thanks to their availability and incomparable beauty, they have always been a favorite artists' motif. But what happens when this apparently all too charming motif of flowers collides with the radical art of modernism? In a comprehensive special exhibition comprising a good 160 works, the Fondation Beyeler will look into this question, taking account for the first time of the entire modern period from Impressionism to the present day. Impressionism in particular marked a watershed in the history of flower painting. The traditional floral still life, in which the transitory nature of beauty was evoked on a symbolic level, made way for a new approach to flowers. Now they became an ideal projection screen for the communication of artists' immediate sense perceptions and emotions.

This holds for the existentially charged flower bouquets depicted by Edouard Manet during the last phase of his career, which was overshadowed by illness. And it holds even more for the flower paintings of Vincent van Gogh, whose treatments of flowers amount almost to covert self-portraits. Surpassing the traditional, strictly codified symbolism of flowers, his depictions became an uncompromising image of the artist's existence at the onset of moder-nism. For the first time, the flower was now no longer merely a motif perfectly suited to demonstrating artistic brilliance, if one that, according to academic definition, was inferior to history painting, portraiture or landscape. Van Gogh is represented in the exhibition, among other works, by Blossoming Chestnut Branches, a major late work from the E.G. BÃ¼hrle Foundation Collection, Zurich.

Subsequently flowers shared the checkered fate of other types of subject matter in moder-nism. After repeatedly serving as a key motif in classical modern art from Fauvism to Surrealism, flowers lost relevance to the avant-garde a priori after the death of Paul Klee at the latest. Like the subjects and genres of art during the Old Master period, now it was aspects of these fields' dissolution which put flowers in the shade â€“ such as modern endeavors to transform the human image or the mutation of form into content that paved the way for abstraction.

Still, in this context flowers enjoyed a certain special status. Although abstraction swept aside the idea of the lovely floral picture along with the primacy of objectivity, perhaps this itself helped reveal the abstract potential which the flower, as form, contained. This becomes evident in the exhibition, for instance, in the art of Augusto Giacometti, but also in that of Jean Arp and Georgia O'Keeffe. Moreover, the flower as pure form intrigued practitioners in a field of art which by definition must seek the abstract in real objects, and which is comprehendsively represented here for the first time in a Fondation Beyeler exhibition â€“ photography. Artists such as Karl Blossfeldt, Edward Steichen, Imogen Cunningham, Irving Penn and Robert Mapplethorpe were affected by the motif of flowers in a special way, and lent it an entirely new aspect in art. This also holds for contemporary photographers like Nobuyoshi Araki and Wolfgang Tillmans, who have introduced an innovative aesthetic into flower photography.

Photography also played a key role when flowers experienced their true renaissance, in Pop Art. Crucial here were the Flowers of Andy Warhol, which, based on photographs, likely represent the most significant floral paintings of the twentieth century. Evidently for the first time after Van Gogh, an essential concept of modernism was developed on the basis of a floral motif. Warhol created something entirely new when, using serigraphy, he crossed the serial image of the television age with the quintessentially serial motif of nature: the flower. Since their comeback with Warhol, flowers have never really disappeared from the studios and exhibitions, in fact having become a veritably obsessive concern of many contemporary artists, both male and female. As the exhibition shows, flowers have conquered the real museum space in the form of sculptures, installations and videos as well.

In addition to the artistic approaches mentioned, the exhibition brings together an abundance of diverse modern works and groups of works on the theme of the flower. To list only a few: The â€œdarkâ€ image of the flower in the prints of Odilon Redon; the Impressionist and Post-Impressionist variations on flowers by Pierre Auguste Renoir, Paul Gauguin, Adolphe Monticelli and Paul CÃ©zanne; the Fauvist flowers of Henri Matisse; Lovis Corinth's late floral paintings; the Expressionist flower in the art of Ernst Ludwig Kirchner, Emil Nolde and Max Beckmann; Max Ernst's reinventions of strange, surreal blossoms; David Hockney's well-nigh ironic insistence on the floral motif in the 1970s and 1990s (with his famous Mount Fuji and Flowers from the Metropolitan Museum of Art, New York, as a major work in the exhibition); Jeff Koons's consciously kitschy three-dimensional flowers of various types; â€œfloralâ€ installations of recent years by MarÃ­a Fernanda Cardoso, Roxy Paine, Keith Edmier, and Yoshihiro Suda (who â€œconcealsâ€ wooden flower imitations in the exhibition space); video works from the likes of Pipilotti Rist and Silvie Defraoui; works by Wolfgang Laib and Andy Goldsworthy, which employ actual parts of flowers; and finally, the return to painting, represented by Beatriz Milhazes and Uwe Wittwer (who refers back to Dutch floral still lifes of the seventeenth century), and the return to drawing, exemplified by Jonathan Delafield Cook.

A key role in the exhibition is played by the â€œdarkâ€ flower, referred to above in connection with the graphic art of Redon. In modernism the flowers of the beautiful and good were always accompanied by the flowers of evil. Charles Baudelaire's famous poetry volume of that title, Les fleurs du mal, first published in 1857, ushered in a new view of flowers at one fell swoop. Not that these poems revolved around the flower as motif itself. Rather, it became a universal image of the special aesthetic of the dark and morbid. From Redon to Pipilotti Rist, the exhibition covers a range of artistic approaches in which flowers, beyond their sheer charm, figure as vehicles of the eerie, anarchic and untamed.

Even though the flower motif only occasionally played a protagonist's role in the history of modernism, it did manage to unfold a remarkable presence over the past 140 years. Evidently there were many things which modern artists could find only in flowers, as discussed in the catalogue with reference to certain thematic fields. Some of these things, such as the affinity of flowers with death, belong to the classical symbolic repertoire of this motif. Others, in contrast, such as a focus on serial imagery based on flowers, or the exploration of their abstract potential, did not emerge until the modern period. In view of these aspects, the flower became a yardstick for the capacity of modernism, based on its new visions, to rethink â€œnatureâ€ as a whole.

Although the classical scheme of a consecutive historical development can play no more than a secondary role in such a broad-ranging review, it has nevertheless remained determinant for the exhibition arrangement. While a lithograph by the Symbolist Odilon Redon, a painting by Paul Gauguin, and an enormous Pop painting by James Rosenquist might revolve around the same enigmatic phenomenon in the field of flowers â€“ the affinity of flower with eye â€“ this does not necessarily mean that these three so different works would profit by a direct juxtaposition. This is why the exhibition follows a more or less chronological order. It permits us to trace the ramifications of the treatment of flowers in art through the decades. The exhibition might be compared to a musical score in visual terms, in the course of which the diverse leitmotifs of the presence of flowers in modernism become visible in ever different forms.

The exhibition combines classical and contemporary approaches in modernism in a time-tested way. It was conceived in cooperation with the Louisiana Museum of Modern Art in HumlebÃ¦k, near Copenhagen (10 September 2004 â€“ 23 January 2005), and was supple-mented by Philippe BÃ¼ttner and Ulf KÃ¼ster for the Fondation Beyeler with key works, especially from the classical modern period.

The most important lenders to the exhibition include the Van Gogh Museum in Amsterdam, the Kunstmuseum Basel, the Neue Nationalgalerie in Berlin, the Museum Ludwig in Cologne, the Tate, London, the State Tretyakov Gallery in Moscow, the Metropolitan Museum of Art, New York, the Centre Georges Pompidou in Paris, the Theran Museum of Contemporary Art, and the Stiftung Sammlung E.G. BÃ¼hrle in Zurich. Numerous works are on loan from private collections in Europe and the United States.

The catalogue is published in a bilingual German and English edition by Minerva Verlag, Wolfratshausen. It contains an introductory essay by Philippe BÃ¼ttner on the myth of flowers in modern art, a contribution by the literary historian Robert Kopp on the motif of the flower in French Symbolism, and discussions of selected major works by Ulf KÃ¼ster. The volume comprises approx. 208 pages with 140 full-color illustrations and is priced at CHF 58.â€“.