Hommage(s) to Matisse. These works were not created to be a tribute. The figure of Matisse is revealed by a title given a posteriori. But the permanent influence of Matisse emerges clearly. A hundred of works, from the first canvases to the more recent monumental works which use a wide range of supports, as well as drawings inspired by the universe of bullfighting and illustrated books. 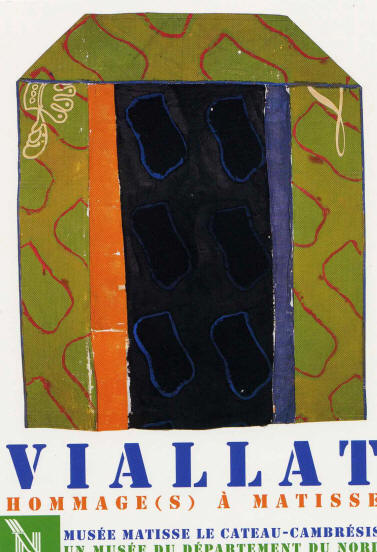 The MusÃ©e Matisse retrospective exhibition dedicated to Claude Viallat offers a hundred of the artistâ€™s works, both well known and more recent one - coming from the artistâ€™s workshop, private collections and various museums - from the first canvases to the more recent monumental works which use a wide range of supports, as well as drawings inspired by the universe of bullfighting and illustrated books.

Another look
These works were not created to be a tribute. The figure of Matisse, present during the making but unconsciously so, is revealed by a title given a posteriori. The permanent influence of Matisse emerges clearly. Yet this is not a constraining factor but rather one of the sources, enriching the artistâ€™s view of his world. Claude Viallat tackles the issues of the decorative, abstraction, the use of colour and space. Coming as he did from NÃ®mes, he was influenced like Matisse by southern light. He manipulates pure colours, his contrasts can be said to be almost violent, motifs are dissonant, while succeeding in reaching a surprising harmony.

Around Matisse
The exhibition is laid out chronologically and defines the various periods of Claude Viallatâ€™s life. The first oils on wood: semi-figurative, they were made during his military service, and inspired by Matisseâ€™s Danse. The Wave painted in 1952, was the starting point for the artistâ€™s first abstract works on frames in the years 60-65. In 1976, Viallat defined his abstract language - after debates with others in the Supports/Surfaces group of which he was a founding member. It is the year when the series of French Windows was started, inspired by FenÃªtre Ã  Tahiti and French window at Collioure by Matisse. Around Interior with Aubergines, Viallat made a series of works on large market-sellersâ€™awnings.

The diversity of supports
In his later works, Viallat uses the structure of the support to build space. "Matisseâ€™s ideas are present in my work but with a difference. I do not observe reality. He created theatres with fabrics. I leave the reality of my support, its original colour, its materials". The exhibition shows the extreme diversity of materials he used: parasols, curtains, lace, embroidery, market tradersâ€™ awnings and boats' nets, joined up supports, tent materials... The fabric is not dyed, or glossy: the artist makes use of its natural characteristics. Each part of the fabric functions both individually and in relation to its adjoining piece.

The exhibition is also the occasion to present some figurative drawings and small gouaches in bright colours of spontaneous characters on bullfighting scenes. Drawn from memory after the event, they enable Viallat to escape the abstract system which he has imposed upon himself for the rest of his work. He also illustrated many books which made it possible for him to approach smaller, more limited formats. Seeing the work of Viallat in relation to that of Matisse or through his passion for bullfighting, enables us to widen the range for possible readings of them and to try to apprehend his universe in a more intimate manner.
Illustration: Claude Viallat Untitled 1998 Acrylic on cloth 30x30cm Artist's studio ADAGP 2005 Photo Pierre Schwartz

MUSÃ‰E MATISSE
A museum of the DÃ©partement of Nord
Palais FenÃ©lon
Le Cateau-Cambresis
OPENING HOURS: Open every day 10 am to 18 pm, Closed on Tuesday