His work finds inspiration in the realms of architecture, dance, film and cartography. The absence of the human figure in his repetoire evokes their presence by acknowledging the confining complexities of a modern society; reflecting on our place in a scene and on the world's stage. In the show an impressive four-panel painting which interpolates fragments of American road maps, a selection of Kuitca's Theatre Collages and a series based on Richard Wagner's operatic Ring Cycle 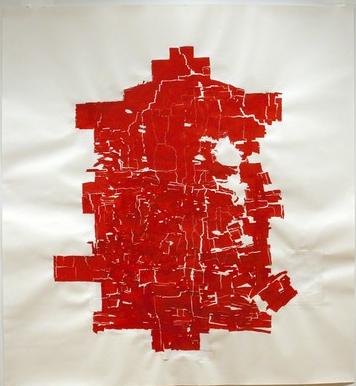 Born 1961, Guillermo Kuitca is a key figure in the history of Latin American art whose work finds inspiration in the realms of architecture, dance, film and cartography. Hauser & Wirth London are delighted to present this prolific Argentine artist - who commands a strong international following - to a new audience in the UK. A limited edition catalogue accompanies the exhibition with texts by conductor Stephen Barlow and editor of 'Modern Painters' Karen Wright.

Since the 1980s, Kuitca's iconographic vocabulary has created numerous powerful and distinct bodies of work. His striking diversity of touch and potent reinventions on a panoply of motifs, such as apartment plans, maps, conveyor belts, crown of thorns, beds and institutional architecture ranging from stadiums to cemeteries, have introduced unexpected variations on these themes. Kuitca's utilitarian imagery can be read as 'locale' in its most diagrammatic sense, but it is the artist's curious conveyance of movement in all forms, in the home, through cities and in dreams that attempts to map physical and mental coordinates of a lifetime. The absence of the human figure in Kuitca's repetoire evokes their presence by acknowledging the confining complexities of a modern society; reflecting on our place in a scene and on the world's stage.

The main gallery space features Everything, 2004, an impressive four-panel painting which interpolates fragments of American road maps. The enigmatic veined surface invites the viewer for closer inspection where one can identify the names of locations; painstakingly woven in parts. Devoid of any beginning, end, or coordinates, places dissolve within some larger unknown entity of no geographical order. Maps are one of Kuitca's leitmotifs and have played an extensive role in his work. The graphic configurations function as his reading of tensions between one's assignment of place and belonging, of home, but on the idea of the 'place' being Universal. Here, the viewer traces an imaginary journey, which goes, and returns, to nowhere. A sense of search and self-scrutiny on the weathered surface suggests loss and dislocation.

A selection of Kuitca's Theatre Collages (2003-2004), also exhibited in the main gallery, are based on seating charts of famous opera houses and theatres. Kuitca's seating plans are magically transformed into hovering abstracts that allude to audiences. Incised with architectural precision, each work retains the view from the stage, looking out to the void of an auditorium. The treatments are different as he draws attention to the relationship between stage and audience. Various rich hues in Kuitca's use of colour are seen interlapping and seeping into each other, almost reflecting the turbulent emotions of an audience in the grips of a performance. The results proffer a suspended state; a captured moment. Kuitca's juxtaposition of private and public space is subtler in these works as the viewer's eye is drawn to seats that would otherwise be occupied: individual, yet impersonal.

The Ring (2003-2004), shown in the Vault Room, is a series based on Richard Wagner's operatic Ring Cycle. Individually titled Das Rheingold, Die WalkÃ¼re, Siegfreid and Gotterdammerung, Kuitca has referenced album covers of historic recordings of these operas. Formed with shredded paper, the collages create quivers and trembles that evoke a performance stirring within. There is here, a linking factor to Kuitca's theatre collage Bayreuther Festspielhaus, 2004, of the opera house custom-built by Wagner and site of The Ring's epic premiere in 1876.

Guillermo Kuitca is one of Argentina's most renowned artists. Travelling to Europe in the 1980s, he was inspired by a meeting with choreographer Pina Bausch and returned to Buenos Aires to direct and design several experimental theatre productions. In that period, the emergence of themes and imagery seen in his work to date, began to take form in his painting. The elemental structure of the bed, for one, a principle site of sleep and dreams, birth and death, was used to help create a feeling of individual isolation. He began a series on maps and apartment plans, sometimes tinged with religious motifs that still pervade his work in some form today. Kuitca's reiteration of composite layouts have continued to emerge in his work as points of reference, often bringing us from interiors to exteriors and creates perspective spaces counteracted by his chosen medium. An interest in oppositions is best seen in his bed installation Untitled, 1992, shown at Documenta IX, where Kuitca painted maps directly onto the bed mattresses combining themes of sickness and death, with that of movement and life. Kuitca's unique work continues to marry documentary fact with an almost surreal fantasy and reminds us, with symbols, of our interchangeable urban anonymity.