Eve Sussman & The Rufus Corporation. The project was inspired by the Western masterpiece 'Las Meninas'(Maids of Honour) painted in 1656, by Diego Velasquez, and is a fluid choreography, bringing together an ensemble of visual atmosphere, performance and process. It's realised as a ten-minute high definition video piece that allows the eternal moment depicted in the painting to exist as a fleeting gesture and continue as if the movement had occurred in daily life. 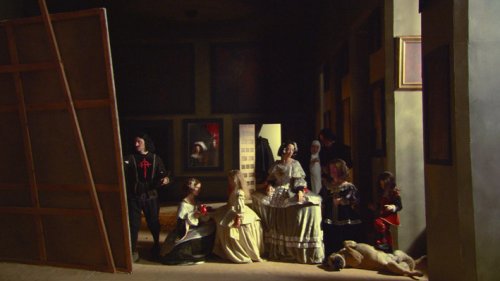 Union is pleased to announce the London premiere of â€™89 Seconds at AlcÃ¡zarâ€™ by the New York based company founded by video artist Eve Sussman, The Rufus Corporation. In addition to the video installation, photographs from the project by Bobby Neel Adams and Benedikt Partenheimer and flat screen â€œmoving paintingâ€ works will also be on view.

Before starting The Rufus Corporation, Sussmanâ€™s work included installations that involved time-based surveillance and cinema veritÃ©, collaboration with actors and non-actors, and various modes of video and filmmaking.

â€™89 Seconds at AlcÃ¡zarâ€™, which was inspired by the Western masterpiece â€˜Las Meninasâ€™ (Maids of Honour) painted in 1656, by the Spanish painter Diego Velasquez, is a fluid choreography, bringing together an ensemble of visual atmosphere, performance and process. Sussmanâ€™s interpretation of the painting that inspired this motion picture rendering is that â€˜Las Meninasâ€™ is a â€œfilm still that predates photography by 200 yearsâ€. With this in mind, â€™89 Seconds at AlcÃ¡zarâ€™ is realised as a ten-minute high definition video piece that allows the eternal moment depicted in the painting to exist as a fleeting gesture and continue as if the movement had occurred in daily life.

Considered by Sussman to be the â€œfirst cinÃ©ma vÃ©ritÃ© momentâ€, the painting â€˜Las Meninasâ€™ has been historically revered as groundbreaking for its ambiguous photographic quality and its use of perspective whilst engaging the viewer into a dialogue about representation of the image. Various motives within the work such as the reflection of King Philip IV and Mariana of Austria, Queen of Spain in the mirror, the self portrait of Velasquez, the famous gaze of the Empress, Infanta of Spain and the frozen gestures of the maids, and Jose Nieto, the Queens Chamberlain, caught half in the doorway contribute to the general critique of the work as successfully capturing a moment, as in photography.

The 360Â° steadicam cinematography that is focused on content and choreography was developed as a collaboration with Rufus Corporation company members and their choreographer Claudia de Serpa Soares. Their initial improvisations explored how the characters might have entered the room, their underlying motives, psychological tensions and emotional content, creating an implied narrative in the piece. The Velasquez scholar Jonathan Brown was consulted in an attempt to gain further insight into the life and etiquette of the characters.

In order to recreate the Salon in the AlcÃ¡zar as closely as possible the set, built in 4 weeks, was conceived with the architect Robert Whalley and Master Scenic Rebecca Graves. The costume designer Karen Young recreated the Baroque wardrobe through research at The Costume Institute and the exhibition â€˜The French Taste for Spanish Paintingâ€™ organised by The Metropolitan Museum of Art, New York. The composer Jonathan Bepler developed the sound track with over 64 tracks of ambient, folied and vocal recordings, to culminate in an atmospheric score that makes the room come to life.

â€™89 Seconds at AlcÃ¡zarâ€™ offers a close panoramic look at the famous Velasquez painting, yet as a point of departure the piece takes on a unique direction of its own, through the collaborative process of improvisation and non-verbal discourse of body language and performance.

â€™89 Seconds at AlcÃ¡zarâ€™ has been made possible with generous support from Roebling Hall Gallery, New York and The Arts Council of England.