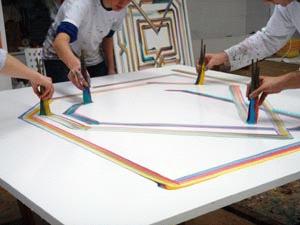 At the gallery Emmanuel Perrotin, Bernard Frize is showing tree new series of paintings. They sustain in a spectacular way the reflections which have driven the artist for more than twenty years.

The merry easiness of Bernard Frize paintings seems to challenge any attempt at describing them. When it comes to put pen on paper and convey what takes hold us when beholding them, one has to order a mess of impressions and take the risk of loosing the sense of their unity.

One set presents the weaving of four branches intertwined into a braid.Contemporary mathematical literature studies this pattern (groups of transforming braid and nods). In order to obtain a braid, one needs the regular passing of alternating brunches one over the other. Among the pictorial questions distinctively answered by Bernard Frize, is that, which consists in showing this kind of alternation. In mathematical publications, the answer is very simple: the branches are represented by an unbroken black thread, which becomes intermittent when passing below itself or another branch. One ventures that the authors have been fooling around the design with countless attempts at redrawing, erasing, tracing in order to achieve it. (In a similar process, the technique used by Vinci or Durer in their interlaces has been erased.) In Bernard Frize's paintings, everything is shown, nothing has been erased. One can follow the passing of the brushes above previous lines thanks to the traces superimposed and the blending of colours, which happens.

One can thus follow the tracing of a branch, its evolution and its closing: one sees the starting point when the brush is heavy with colours and the ending of the trace where it is most airy and frail. "It has to be possible to see the slightest mark left by the brush, as though it were a report". This however does not solve the challenge of representing an interlace made of several branches. If each of them had been traced in a row, one after the other, there wouldn't have been any interlaces to see. No braid, no nod, no blending of colours. Only a mere superimposition of branches. In order to achieve an intertwine, Bernard Frize picks up a technique he invented a few years ago: four-hands painting. The artist defines for himself and three assistants one's order of passage. Over the horizontal canvas, they perform the order of the game. When contemplating the pictures produced abiding by these rules, one cannot but imagine the choreography, which presided over their execution.

Another set shows patterns of four branches tresses, but the tresses are loose. One could describe them as if there were the previous tresses, but a side view of them, not frontal one. These are loose interlaces: at the two ends of the pattern, one sees the branches is edges, left unfastened. One can reconstitute what their closing would be like by animating the woobly branches: they would gather in a virtual nod before or behind the canvas. This is another virtue of Bernard Frize' s paintings: they provoke the beholder into mental experiences.

The colours of the two series are impossible to define. Each branch is traced by several brushes held together and the neighbouring colours melt lightly with a view to become totally impossible to distinguish precisely just as they would be, had they been in some mathematical treatise. Notwithstanding its virtuosity, BF painting is not about demonstration. It remains a sensual experience, one "feels that it all happened in a shot, obeying to a single gesture".

A third set proposes horizontal images composed of stitch: a row of horizontal curls is intertwined with another row of curls below and so forth. It is a simplified plait. Here again, the complexity lies in the art of rendering this intertwine with painting. The order and tempo of the passages below and above has to be visually respected, that is to say, with Bernard Frize, in the order, which dictates the fabrication itself. Here the colours, more vivid, turn into chained melting hues.

Bernard Frize ironically signals that: "A formal analysis of painting should come to terms with explaining what is seen; this is at least the meaning of the question, which is incessantly asked me: 'How is it made?'." But the answer to this question cannot account for images, which appear before our eyes. The knowledge that the patterns made of changing colours are enhanced by several layers of white resin, does not, for example, tell us much of the visual appeal these images convey. Their allure is unfathomable.

In the theoretical debates, which have agitated painters for a century, Bernard Frize holds an eminent position: the rigour of his methods and the freedom of their execution endow him with the power of painting exploring dimensions never suspected before.
Eric Duyckaerts

Known for his hyper-real allegorical sculpture, Tony Matelli investigates the complexity of contemporary culture and calls into question societal mores so often taken for granted.

"Self-realization is the current societal dilemma, actually it always has been, weâ€™ve just been distracted. With our current state of relative stability we find ourselves with out external distractions. Many of us are starting to look inward, and we are coming up empty.

I make work that speaks of the need and the frustration of trying to locate oneself within an already set world. My work frequently depicts things finding wayward means of survival. This is the truest way I know to depict the current psychological state among myself, my friends and acquaintances; the people I make work about, and the people I make work for."
Tony Matelli