The RAF-Exhibition: a show whose aim is to research and, for the first time, to present together the media echo of the Red Army Faction and artistic positions directly or indirectly addressing the history of the RAF. More than 100 works by more than 50 international artists from three generations will be exhibited. By Klaus Biesenbach, Ellen Blumenstein, Felix Ensslin. 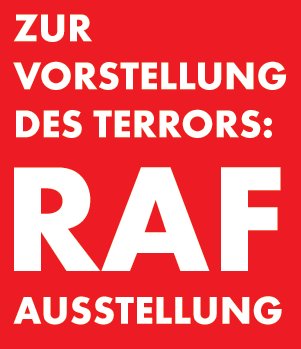 The Neue Galerie Graz presents, as the only other venue in Europe, "Regarding Terror: The RAF-Exhibition", as conceived by KW Institute for Contemporary Art in Berlin.

KW showed this art exhibition dealing with the Red Army Faction (RAF) from January 29th to May 16th, 2005. A huge political debate over whether the exhibition was legitimately publicly fundable occupied the German press throughout the summer and autumn of 2003.

As a consequence the exhibition had to be financed through an ebay auction which took place in December 2004. 12 international artists, who are not included in the exhibition itself, donated important pieces that were all sold in this auction: Marina Abramovic, Doug Aitken, Francis Alys, Monica Bonvicini, Dinos and Jake Chapman, Thomas Demand, Andreas Gursky, Carsten Hoeller, Paul Pfeiffer, Ugo Rondinone, Lawrence Weiner, and Jane and Louise Wilson.

In "Regarding Terror: the RAF-Exhibition" the media echo of the Red Army Faction together with artistic positions directly or indirectly addressing the history of the RAF is presented. Nearly 70 works by 50 international artists from three generations are exhibited. The exhibition brings together important artistic positions since 1970. Especially in the 1970s, the RAF became an object of images, quotations, and references in a society shaped by the mass media. In this context, each in its own way, the exhibited artworks create new systems of reference that do not remain stuck in mechanisms of identification or emotional occupation, but that allow the viewer to gain new access by establishing distance.