144 bright Thorn Mundial R outdoor floodlights with a luminous flux of 200,000 lumens per emitter and a total output of 288 kW. 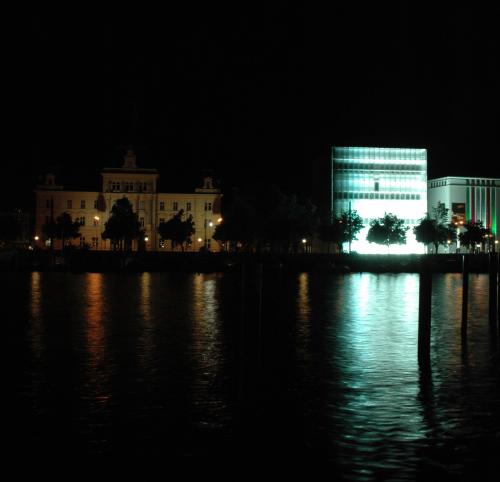 During the summer nights of 2005, the Vorarlberg artist Siegrun Appelt, born in 1965, will transform the Kunsthaus Bregenz into a brightly lit sculpture. With this work, the Kunsthaus Bregenz will be continuing its long artistic tradition of exploring the glass skin of the building as well as public space in Vorarlberg. Some recent examples have been works by James Turrell, Keith Sonnier, Tony Oursler, Ruth Schnell, Tone Fink, and Jenny Holzer.

The project consists of three elements. The heart of the installation comprises 144 bright Thorn Mundial R outdoor floodlights with a luminous flux of 200,000 lumens per emitter and a total output of 288 kW. From the light well at the level of the first basement between the building and the faÃ§ade, 36 floodlights on each of the four sides of the Kunsthaus will be directed upward at the sky. For the first fifteen minutes, all the floodlights will be turned on at once, consuming a total of 288 kW of electricity. After this initial phase, each side will be illuminated separately, the light wandering around the Kunsthaus â€œside by sideâ€ at a rate of approximately 30 minutes per rotation. Thus each side will be lit for approximately eight minutes before the illumination disappears around the corner.

At the core of this sculptural display is a sophisticated technical set-up consisting of switch and junction boxes,144 series connection units, and the network of a hundred meters of electrical cables that all come together at the first basement level of the KUB, where they connect to the 144 floodlights in between the building and its glass faÃ§ade. Here visitors can view this cluster of wiring; thus the energy that lights up the nighttime sky over Bregenz is also visible during the day.

On the first basement level, photos and texts document the interlinking of the complex project, the external cooperating partners, and the artistâ€™s intentions.

The enormous light intensity of the light sculpture at the Kunsthaus will have conceptual counterparts at different venues throughout Vorarlberg. Every evening between 10 and 10.15 p.m., the lights will be turned off at prominent points in Vorarlberg: the total amount of electricity that would otherwise be needed for the outdoor illumination of a number of public buildings, industrial
facilities, churches, monuments, private houses, historical buildings in Bregenz, Bludenz, Feldkirch, Dornbirn, Hohenems, Nenzing, Koblach as well as several other places will correspond to the 288 kW of electricity needed to power the installation at the Kunsthaus Bregenz.

For years, Siegrun Appeltâ€™s work has revolved around the feature of human perception. In videos of train voyages she let the landscapes flash by. Then in the last few years, her attention focused on rooms in rest and became dedicated to the sources and conditions of our perception, to the light itself. Her position regarding the causes and consequences of so-called light pollution began at the same time: light for accentuating â€œimportantâ€ buildings like churches, palaces, castles, as well as stores, private houses, and industrial facilities, which have thus been tagged by virtue of their spectacular illumination as sites of attraction although they are being used to
serve an entirely different purpose. It consequently concerns the light dome that emanates over cities and population centers produced by the diffusion and reflection of artificial light systems.

Extending the project and incorporating many towns throughout the state of Vorarlberg into the light sculpture at the Kunsthaus Bregenz creates a reflective link between the exhibition building and the sites of the illuminated or non-illuminated objects â€“ a dialectic demonstration of the culturally coded exhibition value of light and the energy expenditure necessary for its generation.