In The Main Space: Tracking Suburbia, with works from the ETH (the Swiss Federal Institute of Technology Zurich) collection by Peter Fischli and David Weiss, Urs Luthi, Boris Rebetez and Jean-Frederic Schnyder. The exhibition presents the work of 5 important artists whose practice has contributed to the tradition in American photography of documenting the life and architecture of suburbia. In the Project Space: Do You Like Stuff? investigates the exploding mass of information that inundates our current reality. 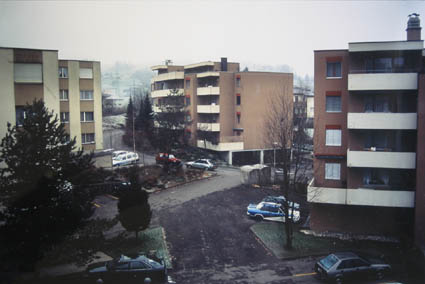 In The Main Space:

with works from the ETH collection by Peter Fischli and David Weiss, Urs Luthi, Boris Rebetez and Jean-Frederic Schnyder

The Swiss Institute â€“ Contemporary Art is pleased to announce an exhibition in celebration of the 150th anniversary of the ETH, the Swiss Federal Institute of Technology Zurich. Curated by the ETHâ€™s own Paul Tanner, this exhibition, TRACKING SUBURBIA, presents the work of five important Swiss artists whose practice has contributed to the tradition in American photography of documenting the life and architecture of suburbia.

In 1967, the American photographer Bill Owens began taking pictures of local people in front of and inside their freshly built suburban houses, as a photographer for the small-town California paper The Livermore Independent. He often photographed his subjects on holidays such as Christmas and the Fourth of July, or at birthday parties. These pictures were published in the 1972 book Suburbia. Owens had managed to elucidate a particular aspect of the American way of life: his pictures have become classic images of the American dream. A number of Swiss artists have also followed the trail of the suburbs, this anonymous zone between city and country.

In the early 1970s, Urs LÃ¼thi (born 1947) combined photographs of houses and apartment buildings with self-portraits, dressed in full drag. To LÃ¼thi, as for Owens, the interactive element, a personâ€™s relationship to his or her own house, was crucial.

Peter Fischli (born 1952) and David Weiss (born 1946) on the other hand, kept the houses and regions they depicted devoid of people. In 1992 they published a series of photos, Seidlungen, Agglomeration, which treated the Swiss suburbs with their signature frankness and stark humor.

The youngest artist in the exhibition, Boris Rebetez (born 1970), lives in Brussels. In 1992, he created a small series of ceramic plates. Instead of depicting well-known subjects one would find on a souvenir, he chose to represent anonymous buildings found in every suburb.

The painter Jean-FrÃ©dÃ©ric Schnyder (born 1945), famous for his half-naÃ¯ve, half-conceptual series of images of Swiss freeways, train stations and waiting rooms, turned to photography in 1999-2000. No doubt inspired by Ed Ruschaâ€™s 1966 series, Every Building on Sunset Strip, Schnyder photographed every building on the road between the towns of Zug and Baar, and, with the help of a computer, strung these images together into a seamless nearly 14-meter strip of images.

Tracking Suburbia is made possible in part from support from the ETH Zurich, the Consulate General of Switzerland New York and SWISSPEAKS 05.

In the Project Space:

Do You Like Stuff? investigates the exploding mass of information that inundates our current reality. From a paranoid desire to make order out of chaos or a brave embrace of entropy, this exhibition focuses on artists with inventive practices of collecting, cataloging and presenting masses of stuff. Inspired by the work of a generation of great indexers and amassers such as Peter Fischli & David Weiss, Dieter Roth, or the Bechers Â­ who were able to create concise archives of the visible and experiential world Â­ the younger artists presented in Do You Like Stuff? deal with an ever-growing â€˜wholeâ€™ that has reached gloriously monstrous heights with the current chaotic ordering of digital information.

Like Douglas Huebler, who set out to photographically document the existence of everyone alive with his Variable Piece No. 70 of 1971, the artists in Do You Like Stuff? embrace the impossible. Acknowledging the long-standing artistic project of representing â€œan everything,â€ the work in this exhibition re-thinks the impossibility of carving a concise, poetic index from todayâ€™s overwhelming mass of information.

The work in Do You Like Stuff? speaks to a moment in our culture where information is propagating without an efficient mechanism for maintaining order. Artists face this pandemonium in different ways: some dive straight into it, like Barb Choit or Graham Parker who deal directly with the supposed waste of the internet, treating spam and ebay jpegs with the care and attention of archivists. Daniel Lefcourt tests the limits of meaning and representation through the strategy of collecting and displaying of a lexical series of images. Mark Orange contributes to and updates a musical discussion between Erik Satie and John Cage about the density of time and repetition with his Digital Vexations. Mike Bouchet creates a compendium of texts from hundreds of Hollywood screenplays that endlessly scroll on screen: a veritable â€œfilm festival for readersâ€. David Adamo and Beth Howe recognize the value of delving into every nook and cranny of our too-dense reality: Adamo acts as an arcane stalker-investigator, and Howe turns the situationist model of the dÃ©rive inside out as she reports on her intellectual starts and stops through the library. Frank Olive, both on his own and with collaborator Rudy Shepherd, collects, catalogues and presents everyday ideas and objects, attempting to provide his viewers with an experience of order and comfort, opposing the tendency towards disorder.

Do You Like Stuff?, part of the SIâ€™s New York emerging artists projects, is made possible with public funds from the New York State Council on the Arts, a State agency.

Swiss Institute
495 Broadway, 3rd Floor
New York NY 10012.
The gallery is open between the hours of 11 am and 6 pm, Tuesday through Saturday, when there is a current exhibition.