How Society and Politics Get in The Picture

Since the 1960s, if not before, artists have centered their work more increasingly and offensively on issues of class, gender or ethnic origin, as well as on related socio-political parameters. The exhibition, compiled from both works of the collection and loans, centers on some of the highly diverse and often surprising artistic approaches that have been deployed in this field. With works by Bureau d'etudes, Alice Creischer, Andreas Siekmann, Maria Eichhorn, Hans Haacke, Klub Zwei/ Schwarze Frauen Community, Andreja Kuluncic, Adrian Piper, Martha Rosler, Stephen Willats 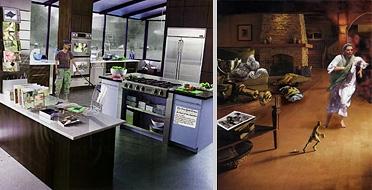 The exhibition cycle launched last year to highlight themes of the collection is this time dedicated to an area that more than any other is significant for the Generali Foundation: Art â€“ Society â€“ Politics. The focus of this second exhibition in the series is on artistic practices reflecting onâ€”or even intervening inâ€”social and political conditions. Since the 1960s, if not before, artists have centered their work more increasingly and offensively on issues of class, gender or ethnic originâ€”as well as on related socio-political parameters. The exhibition, compiled from both works of the collection and loans, centers on some of the highly diverse and often surprising artistic approaches that have been deployed in this field.

The exhibition is structured by four renowned artistic stances in which socio-political issues have formed a fundamental theme since the 1960s/70s. The selected works by artists of the younger generation can be read in relation to this. Rather than individual works here it is more comprehensive artistic projects that form the focus. Like several overlapping circles, differentiated artistic practices and image politics crystallize within the exhibition.

Forming one of the four centers of the exhibition is the work "Gallery-Goersâ€™ Birthplace and Residence Profile" (1969/1970-71) by Hans Haacke (1936 Cologne, Germany â€” New York, USA). This work represents Haackeâ€™s departure from examinations of physical and biological systems in favor of the legendary analyses of socio-political and economic systems he has been undertaking now since the end of the 1960s. This work was produced in two phases: in 1969 Haacke invited visitors to his exhibition at a New York gallery to mark on the displayed maps of the individual boroughs their birthplaces using a red colored pin and their place of residence using a blue one. Two years later at a gallery in Cologne, Germany, he presented an evaluation of the 732 Manhattan addresses. Thus, what the wall installation extending over a distance of more than 40 meters really amounts to is a piece of social cartography of the 1969 Manhattan art audience.

Mapping complex economic and political systems is the operating principle used by the French artistsâ€™ collective Bureau dâ€™Ã©tudesâ€”
a principle developed in conjunction with the anti-globalization movement. In 2003 the Generali Foundation called the "World Monitoring Atlas" into being and this exhibition is now the first opportunity to see a collection of all 15 maps created since 2001.

Stephen Willats (1943 London, GB) shifted both the production and the presentation of his work out of the conventional art arena and moved it right into society. He did this as a result of his exploration of concept art, the restrictions of art institutions and also the socio- political demands he made on his own artwork. Since 1969 a series

of comprehensive, multi-disciplinary projects have been produced based on the current scientific findings of communication theory and psychology. Presented here again for the first time since its genesis, the "West London Social Resource Project" (1972/73) is one of Willatsâ€™ most comprehensive works and was realized with four different social groups from West London. As part of a multi-phase, interactive learning system participants were given questionnaires and then invited to reflect upon their own behavioral patterns. Through this they were able to assess the significance these patterns have on the perception of their immediate environment and, in a further phase of the project, they were able to develop a reworked model reflecting this (mode of) perception. While relevant intermediate results were presented to participants on "Public Register Boards" at public libraries in West London, Willats presented the project to the art audience in the form of the "Public Monitor".

Similarly, when Maria Eichhorn (1962 Bamberg â€” Berlin, Germany) was commissioned to produce artworks to decorate the Generali Insurance headquarters in Berlin she also used questionnaires, inviting Generali staff to explore the theme of "Arbeit / Freizeit" (Work / Leisure). The findings of this survey provided the basis for an exhibition for which staff proposed objects for display, even contributing here with loans or gifts. After these offices were moved into a new building which lacked space to house the artwork and as some of the participants no longer worked for the company (also due to restructuring), this â€œstaff exhibitionâ€ has now become a historical sociological picture of a company, mirroring the potential for change of both art and society.

A topic currently at the heart of intense public debate is dealt with in the artwork "Distributive Justice", www.distributive-justice.com, by Andreja Kuluncic (1968 Subotica, Yugoslavia â€” Zagreb, Croatia) and this work was also developed in a multi-disciplinary fashion. Produced for the first time in 2001 for Documenta 11, the Internet platform undergoes constant developments and updates in line with the local specifics of the relevant exhibition context. In the exhibition itself visitors have a â€œworking space installationâ€ at their disposal where numerous events are held.

The renowned photo-text installation "The Bowery in two inadequate descriptive systems" (1974-75) by Martha Rosler (Brooklyn, New York, USA) from the Generali Foundation Collection is one of the key

works to deal with the fundamental question of whether the reality of social problems can be represented in an artwork by means of documentary photography or text. Entertaining yet profound like one of Brechtâ€™s â€œLehrstÃ¼ckeâ€, Roslerâ€™s performances, videos or postcard novels open our eyes to social injustice, in particular in terms of gender issues. Prompted by the war in Iraq, last year she resumed her legendary photo montage series "Bringing the War Home" (1967-72), this time with new images from newspapers. Along with other works a selection of the new series will now be on show in Vienna for the first time.

The aspiration to generate a relatively easy-access, though no less precise, form of debate for socio-political and economic issues in an artwork is also met by Alice Creischer / Andreas Siekmann (1960

Geroldstein, 1961 Hamm â€” Berlin, Germany). In "Occupying Space / Wasting Time" (2005)â€”an exhibition guide accompanying a spatial intervention commissioned for the exhibition of the Generali Foundation Collection at the Haus der Kunst in Munichâ€”they investigated the concepts of time, labor and useful exploitation within the historical context of some of the artworks exhibited.

After her earlier paintings and her highly conceptual, exclusively text-based works of the 1960s Adrian Piper (1948 New York â€” Cape Cod, USA) has been addressing the issues of racism and xenophobia in her works since the 1970s. In photographs, video pieces and often large-scale installationsâ€”like her multi-media installation "Black Box / White Box" (1992)â€”she creates a direct and immediate connection between the beholder and the artwork

through special text and image strategies. For instance, Piper uses words like â€œhereâ€ and â€œnowâ€, â€œyouâ€ and portrayals of people who look beholders straight in the eyeâ€”using the term â€œindexical presentâ€ to describe this.

In a similarly consistent manner Klub Zwei (Simone Bader, 1964 Stuttgart, Germany and Jo Schmeiser, 1967 Graz â€” Vienna, Austria) devote their artistic work to the themes of anti-Semitism, racism and sexism. In their project series "Working on/in the Public" they developed a collaborative structure that was co-determined by the participating (female) migrant groups.

Several projects came about as a result of this: the project initiated in association with the autonomous center for and by female migrants MAIZ (Autonomous Centre by and for Migrant Women) and, more recently, the public project "Arbeiten gegen Rassismen" (Working against Racisms) initiated in conjunction with the SFC â€“ Schwarze Frauen Community (Black Womenâ€™s Community). A new public project for the banner in the Wiedner Hauptstrasse was commissioned especially for this exhibition.

The exhibition cycle dealing with themes of the collection was inaugurated last year with the exhibition COLLECTED VIEWS FROM EAST OR WEST, a show reflecting the East-West issue. A series of publications featuring theoretical texts will accompany the various exhibitions.