The historical intention of a portrait has been to capture the character, the personality of those being portrayed whether it is a person or a city. Leo Kandl, Rabea Eipperle und Melanie Manchot have through different approaches dedicated themselves to the theme of portraiture. 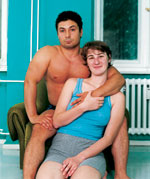 Leo Kandl places such advertisements, before he arrives in a Country and for him a strange Metropolis. Artists of this exhibition announce through the Internet on the streets in fitness clubs or via the local newspapers in order to find their anonymous models. The historical intention of a portrait has been to capture the character, the personality of those being portrayed whether it is a person or a city. Leo Kandl, Rabea Eipperle und Melanie Manchot have through different approaches dedicated themselves to the theme of portraiture.

Leo Kandl begins his search for the project Free Portraits by placing ads in local newspapers of different metropolis's. He establishes himself as a photographer-artist seeking models for his work. The placement of such an advert with definite contact information diminishes the first layers of anonymity in a strange city. The artist need not explain himself, his position has been defined and therefore becomes part of the social systems. However it is completely different for the found models. In the roll of the anonymous model they are actually looking for a designation of themselves. " My models for the most part determine how and where they pose for the camera. As payments for the risk taking of meeting and allowing me to photograph them I offer them to select for themselves one of their own photos."

Rabea Eipperle's photo series Mit uns ein GefÃ¼hl (A sentiment with us) takes up with her images the culture of conservative bourgeois relations and thereby searches the question of privacy and intimacy. The portrait of a couple in a domestic setting, Rabea Eipperle searches especially for bodybuilder's respectively well-muscled men. " I approach them and explain I would like to visit them at their home and photograph them posing as a couple with me pretending to be their girlfriend." The cuddled woman pictured paired with the bodybuilders, the male connotation prototype of power and thus protection from the hostile outside world. The artist shows in her work the till now defined hierarchical gender order exposing the truthfulness in couple portraits while making an interesting contribution in the area of self portraiture.

With the photo series Groups + Locations (Moscow) Melanie Manchot undertakes an intervention in Moscow. She begins at first with a discourse with the late 19th century particularly Russian form of photography that was famous for its "Nation and Folks" pictures. Recognizable Russian landscapes or monuments were used as backdrops for group portraits of the local populace. Due to the enormity of Russia such photographs were used to give the rest of the country a better ideas of the diversity of cultures and people, which existed, in their own nation. Melanie Manchot demonstrates this tradition as well by calling random passersby with asking them to join in on group portraits in front of important sites in Moscow. " These simple and spontaneous performances carry a political meaning, since April of 2004 a new law in Russia strongly restricts or prohibits the right to public gathering."