A re-reading of one of the major international movements of the first half of the 20th century. More than 1,000 works by 50 artists from prestigious public and private collections. The exhibition presents a dynamic panorama of paintings, sculptures, photographs, collages, photomontages and graphic documents, as well as sound recordings and films. The exhibition has been organized with the National Gallery of Art in Washington D.C. and in collaboration with the Museum of Modern Art in New York. 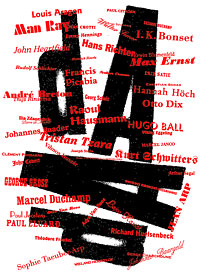 Born during the First World War, the Dada movement expressed a raging contempt for existing values. In its wake, the industrial object was considered as a work of art; performances, sound poetry and the practice of collage, among others, were soon determining elements in the history of art in the 20th century.

The 1910s and the early 1920s saw the advent of the illustrated press, radio, assembly line work and cinema as commercial phenomena. Dada seized the new media and the â€œculture of the machine,â€ and succinctly subjected them to biting criticism. The participants in Dada expressed, through references to modernity, a voracious interrogation of modernity itself.

The Dada exhibition presents a dynamic panorama of paintings, sculptures, photographs, collages, photomontages and graphic documents, as well as sound recordings and films. This rich ensemble of works puts the entire Dada period on parade â€“ from 1916, the date of the foundation of the impertinent Cabaret Voltaire in Zurich, to 1924, when the majority Exhibition of Dadaist groups had left the scene.

The exhibition features many figures of Modernism who took part in the multiple expressions of Dada. Here are specific idioms of the movement that issued from Zurich, Berlin, Hanover, Cologne, Paris and New York, as well as in the Netherlands, Belgium, Italy and Japan.

At the crossroads of multiple influences, the Dada exhibition shows the creative explosion of the first half of the 20th century â€“ one that gives as much significance to words as to images. Thus, a very significant number of books, reviews, photographs and manuscripts are brought together thanks to the exceptional support of the BibliothÃ¨que LittÃ©raire Jacques Doucet and the BibliothÃ¨que Paul Destribats.

In co-production with Ircam (Institut de Recherche et de Coordination Acoustique/Musique), composer Gilles Grand was commissioned to create a contemporary interpretation of the simultaneous poem â€œLâ€™Amiral cherche une maison Ã  louerâ€ (â€œThe Admiral seeks a house to rentâ€) from 1916. This installation, placed at the beginning of the exhibition, uses the revolutionary broadcast sound technology, Wave Field Synthesis (WFS), invented by the University of Delft, The Netherlands and developped by sonic emotion and Ircam.

In conjunction with the exhibition
â€œZAPPING DADAâ€ evening
Sunday 8 January 2006, from 6 to 11 PM, Grande salle, level â€“1
Special price: 6 euros
Â« Zapping Dada Â» will include many artists and art historians who will evoke Dada in an original program, whose common denominator will be the brevity of each presentation.

Hours: exhibition open every day except Tuesday, from 11 AM to 9 PM. Thursday evenings until 11 PM.