The Hell of the Beautiful. 64 international artists 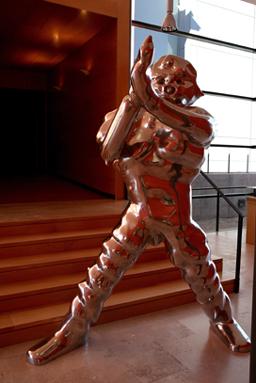 Selected by Domus Artium Chief Curator Javier Panera and guest curators Paco BarragÃ¡n and Omar Pascual, Baroque and Neo-Baroque. The Hell of the Beautiful brings together 64 international artists whose work literally, formally, and conceptually reflect on Neo-Baroque as a aesthetic category in contemporary culture.

Neo-Baroque should not represent a simple return to the celebrated style of the XVII and XVIII centuries, but should also, and above all, reflect a spirit or aesthetic category, a form of cultural organisation with its own representational strategies; a cultural metaphor for our own era that adopts and re-defines â€“ sometimes in a contradictory way â€“ an aesthetic and socio-cultural behaviour that has been developed since classical times.

From our point of view, the Greek Laokoon is as Baroque as the monster from Alien. The Carnival of Rio Janeiro or the Berlin Love Parade are two of the most fascinating neo-Baroque manifestations of our times. The designs of Christian Lacroix, Galliano and Jean Paul Gaultier are clearly Neo-Baroque. Internet is a virtual space which is as Baroque and overwhelming as a vault painted by TiÃ©polo or Andrea Pozzo or Wachowsky Brothersâ€™ The Matrix.

In this sense, a discourse has evolved which primarily takes account of a cultural model defined in terms of ideas such as complexity, simulation, variation, inconsistency, movement, inversion, metamorphosis etc. that in the sphere of visual arts has translated among others into formal processes such as transversability, the prioritisation of heterogeneity, the hypertheatralisation of performance, simulation, rhetorication of forms, allegorical impulse, domination of connotations, metamorphosis of perception and representation.

The project Baroque and Neo-Baroque. The Hell of the Beautiful has evolved from these premises and has led to an exciting show of 64 international artists taking place in various spaces around the city â€“ after all, to all intents and purposes, Salamanca itself is a Neo-Baroque city. The majority of the pieces are notable for their scenographic qualities and visual impact. It should be remembered that the Baroque has always been considered a time that favoured the trompe lâ€™oleil, theatricality and articifice, dreams and visionsâ€¦ The world is just a great stage, Life is just a dreamâ€¦

But we have also wanted the exhibition to be a critical approach to the present. The subtitle The Hell of the Beautiful can be seen specifically as a metaphor for the desperate attempt to find a secret order in the recognition of complexity in the world, one that reality is not able to produce on its own, but one which art is not able to reproduce either without overcoming the superficial levels of beauty.