Art of the Psychedelic Era. A ground-breaking exhibition about psychedelic art which illustrates the unique connections between contemporary art, popular culture, and political protest during the 1960s and early 1970s. The presentation reveals that psychedelia constitutes one of the most exciting but also one of the most neglected phenomena in the history of the 20th century. The presentation of more than 350 works including paintings, photographs, films, light shows, environments, and record covers, as well as documentary material. 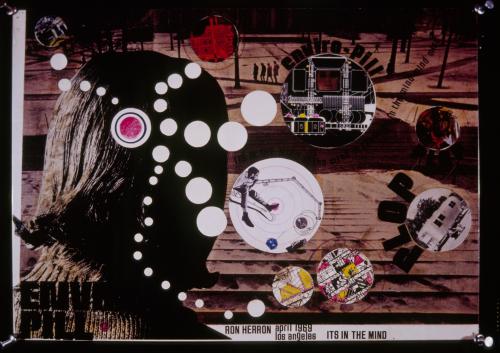 Art of the Psychedelic Era

"Summer of Love" is a ground-breaking exhibition about psychedelic art which illustrates the unique connections between contemporary art, popular culture, and political protest during the 1960s and early 1970s. The presentation reveals that psychedelia constitutes one of the most exciting but also one of the most neglected phenomena in the history of the 20th century. The dialogue between psychedelic art and the political revolution and counterculture of the time manifested itself in an extraordinary aesthetic that gave expression to the social, political, ethnical, and sexual liberation. Striving for an ecstatic art stimulated the expansion of consciousness and the deliberate sensory overload. This was sometimes achieved with the help of hallucinogenic agents that were an essential element of the psychedelic movement. The presentation of more than 350 works including paintings, photographs, films, light shows, environments, and record covers, as well as documentary material from Europe, the USA, South America, and Japan presented within a sensational exhibition architecture designed by UN Studio (Ben van Berkel, Caroline Bos) emphasizes the international character of the movement.

Psychedelic art has traditionally been relegated to the realm of applied art and bad taste, always obscured by the historically and institutionally sanctioned art of the era, the center of which was occupied by Pop, Minimal and Conceptual Art. The psychedelic style was the result of a productive interaction between art, technology, drug culture, music, and many other influences that created an extraordinary aesthetics deeply steeped in the spirit of emancipation and freedom. Most important was the expansion of the range of forms, colors, and media triggered by mind-expanding approaches and linked with a new perception of space. Another crucial achievement of the movement was the fusion of quite different artistic techniques which culminated in a new hybrid art form variously labeled "intermedia," "multimedia" or "mixed media" art. It was this fusion which made those multisensory spectacles possible for which the sixties became famous. In addition, contemporary visual artists began experimenting with light shows or ventured into music, film, fashion, design, or architecture establishing a close affinity with the ephemeral yet highly compelling manifestations of the fast-moving popular and commercial culture.

Psychedelic aesthetics and politics, however, made their mark not only in popular culture but also had an impact on major artists and avant-garde movements of the period. In 1966, on different sides of the Atlantic, artists pioneered the use of slide and film projections at live concerts; Andy Warhol at the New York discotheque Dom and Mark Boyle and Joan Hills at the legendary UFO Club in London. And the emergence of performance as a major art form coincided with psychedeliaâ€™s playful events in which the human body was exploited as an integral and expandable perceptual instrument, stimulated to reach a state of ecstatic frenzy or apathetic inward contemplation.

Offering a wealth of 350 items from the fields of painting, sculpture, photography, film, video, environment, architecture, graphic design, and fashion, "Summer of Love" comprises works by Isaac Abrams, Richard Avedon, Lynda Benglis, Bernard Cohen, Richard Hamilton, Robert Indiana (his legendary "Love" pictures), Yayoi Kusama, Richard Lindner, and John McCracken. One of the major environments of the show is Mati Klarweinâ€™s "New Aleph Sanctuary" (1963â€“1971), which brings together many of his motifs (which he also used in his designs for Santana album covers) in a spectacular installation. Vernon Pantonâ€™s amorphous walk-in furniture landscapes unfold Utopian visions of liberated and relaxed living. Works by Archigram, Hans Hollein, Haus-Rucker-Co and others convey an impression of what visionary architecture is about.

A special emphasis of the presentation is placed on environments as well as film, video and multimedia installations replicating the total experience of psychedelic light shows and music performances. Andy Warhol employed light shows and film and slide projections for the "Exploding Plastic Inevitable" and "The Velvet Underground." Major film installations include a room with multiple projections of Mark Boyle and Joan Hillsâ€™ films, first used in light shows for the psychedelic band "The Soft Machine" and a liquid crystal projection by Gustav Metzger. The medium of film is integrated into the exhibition through large-scale projections of works by Lawrence Jordan, Stan VanDerBeek, Andy Warhol, James Whitney, Jud Yalkut, and Nam June Paik. The documentary sections of "Mapping the Underground" dedicated to the psychedelic scenes in New York City, San Francisco, London, and Frankfurt outline the historical background and portray the movementâ€™s protagonists such as the author Alle n Ginsberg, the LSD guru Timothy Leary and Ken Kesey, who dedicated himself to the popularization of psychedelic drugs with his Merry Pranksters.

"DOTS OBSESSION/LOVE FOREVER": In advance of the exhibition the Schirn Kunsthalle Frankfurt, in cooperation with the Galeria Kaufhof, Frankfurt, is presenting a large-scale work by Yayoi Kusama on the facade and in the display windows of the Galeria Kaufhof on Frankfurtâ€™s Hauptwache in the town centre. In the work she developed for Frankfurt, Dots Obsession/Love Forever, she covers the entire outer surface of the department store with her colorful dots, producing a painting on a scale larger than anything she has done before. The spectacular presentation continues in the Galeriaâ€™s display windows. Inflatable balloons that recall oversized fly agaric mushrooms float above the main entrance behind multistory windows, bringing the ecstatically scattered dots inside the building. In the windows some of the mannequins are hidden behind a dot pattern that monopolizes the entire space. The shop window dummies only return just under two weeks later, wearing the new fall collection at the Galeria Kaufhof.

Another part of Yayoi Kusamaâ€™s work Dots Obsession/Love Forever will be shown in the rotunda of Schirn in parallel with the exhibition Summer of Love, from 2 November 2005 to 12 February 2006.

WEBSITE: In addition, a website will go online with the beginning of the show under http://www.schirn.de/summeroflove . It will offer the possibility to navigate through the years from 1938 to 1972 along a chronology structured after art, music, society, and literature. Users have the option to defamiliarize the various pages visually with psychedelic effects. The website was developed and realized by Neue Digitale GmbH. Kreativagentur fur digitale MarkenfÃ¼hrung, who also act as media partner of the exhibition.