Solo show. The photojournalist changed the face of documentary photography by integrating his life into the lives of his subjects. He demonstrated a drive to reveal the humanity of his subjects and to remove the distance between photographer and subject that had been integral to traditional portrait photography. 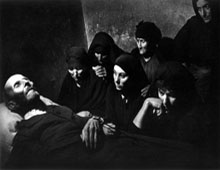 W. Eugene Smith will be exhibited from November 3 through December 23, 2005. A reception will be held on Thursday, November 3 from 6-8pm.

Photojournalist W. Eugene Smith changed the face of documentary photography by integrating his life into the lives of his subjects. During a career which spanned nearly four decades, Smith demonstrated a consistent drive to reveal the humanity of his subjects and to remove the distance between photographer and subject that had been integral to traditional portrait photography. Smith was a pioneer in the field of photojournalism, telling powerful stories through his photographic essays. Whether on assignment overseas in the Pacific Theater during World War II or in the U.S. in the years after the war, he charged his work with a clear sense of social responsibility as he sought to move his audience to acts of social justice. Many seminal images will be featured in the exhibition, including iconic pieces from his years at Life and other publications.

Born in Witchita, Kansas in 1918, W. Eugene Smith began taking photographs in 1933 after he met local press photographer Frank Noel, who became a mentor to Smith. He studied photography at Notre Dame University and in 1938 he joined the staff of Newsweek. Smith also worked as a freelance photographer for Black Star Agency, publishing his photographs in Life, Collier's, and Harpers Bazaar. In the ensuing years, Smith became a full-time staff photographer and war correspondent for Life, Popular Photography, and other publications. While on assignment for Life in Okinawa, Japan in 1944, Smith was gravely injured by mortar fire. After a long recuperation, he returned to his staff position at Life until 1955, when he resigned and became a member of the Magnum photography agency, contributing photo-essays to Life, Sports Illustrated, and other periodicals. He died in 1978.