The artist's work has been exhibited extensively through Latin America and the United States. Retratos (Portraits) is a series of photographs of broken and dilapidated mannequins standing on the sidewalk near clothing stores. El Testigo (The Witness), is a black and white photograph of a white horse. 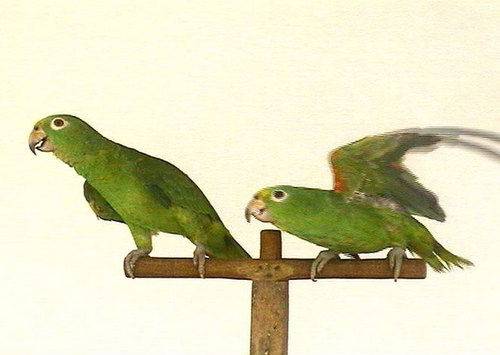 curated by Ana Tiscornia for the EC Group

The current conflicts between the army, the guerillas and paramilitaries in Colombia can be traced back to the 1950s´ confrontations between liberals and conservatives, and the drug cartels to the 1980s. Each successively brutal cycle has devolved the country toward a national psychosis of violence, a state of mind where carnage and fear have become the fabric of daily life. Juan Manuel Echavarri'a's disturbingly beautiful pictures and videos address the dread and human waste of this endless war. The "aesthetic of violence" in his work is a strategy of seduction, anti-shock, and anti-voyeurism. Echavarri'a locates himself within the contemporary debate on the merit of aesthetic pleasure and its possibilities for reconciliation with a critical perspective. He ventures into aestheticism because of its ambivalence and the possibility of hiding horror within false appearances.

Retratos (Portraits) is a series of photographs of broken and dilapidated mannequins standing on the sidewalk near clothing stores. Curiously, the mannequins are used to exhibit and sell garments without being fixed. The lacerated, broken, and battered body goes unnoticed in Colombia, where there is a simultaneous depiction and "normalization" of violence (which is normal and norm at the same time). El Testigo (The Witness), is a black and white photograph of an emaciated, phantasmagoric white horse standing at the center of an extensive, solitary landscape.

Two video works are included in the exhibition: Guerra y Pa (War and Peace) stages two parrots trained during eight months to perform in this nine-minute video. One learned to repeat the word "guerra" (war) and the other says "pa" (pea literally), using the pronunciation of the Colombian Caribbean. The parrots standing on a cruciform perch, fight, change positions, and scream at each other, in a parody of politicians and guerrillas when they publicly address issues of peace and war. Bocas de Ceniza (Mouths of Ash): On a given Ash Wednesday, the Spanish entered Colombia. The name Bocas de ceniza was given to the point of access: the mouth of the Magdalena River. Today, the Magdalena River's current takes and provides a way out for the body of many Colombians killed in these interminable episodes of violence. The video shows close-up on the faces of seven survivors of forced displacement and massacres who sing their stories.