The exhibition embraces a range of approaches revolving around the notion of the object in post-Conceptual Art. Works by 8 artists, curated by Bettina Klein 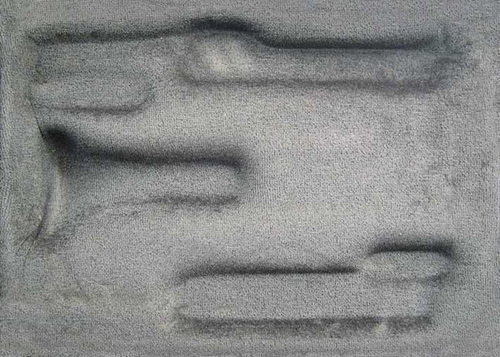 Wishing to contribute to the opening-up of the French art scene to professionals from abroad, La Galerie, Centre d'art contemporain in Noisy-le-Sec, has launched a programme of residencies for exhibition curators. Selected via a call for candidates and projects, Bettina Klein is in residence at Noisy-le-Sec from 3 April to 30 June 2006.

Taking as its starting point the still life (one of whose characteristics is the isolation of objects in an enclosed space) the exhibition embraces a range of approaches revolving around the notion of the object in post-Conceptual Art.
Although Conceptual Art is generally associated with the dematerialisation of the art object and the shift from physical presence to idea, we nonetheless encounter ­ as much in the Conceptual Art of the 60s and 70s as in its current "post" and "neo" manifestations ­ objects and representations of objects that provide grounding for an idea, reflect their own function or are the outcome of some prior action.

Some of the works on show fall into the self-referential category: Alexander Gutke's Exploded View (2005) uses a Kodak slide carousel projecting images taken inside the apparatus itself; Albrecht Schafer's radio Weltempfanger (2006) plays seven stations simultaneously; and Ryan Gander's installation The First Grand National (2003) considers the TV test pattern as an ideal image: no actual content but the potential source of all visual possibilities. The two braille books making up Kirsten Pieroth's Detective Story (2005) represent another kind of encoding: only the blind reader is going to realise that, despite their identical binding and titles, they contain two different Sherlock Holmes stories by Arthur Conan Doyle.

Maria M. Loboda uses a more explicit language in A Guide To Insults and Misanthropy, with its bouquet of thirty or so flowers and herbs chosen according to the flowering season. Each of them represents a different insult in the language of flowers of the Victorian era.

Florian Slotawa's series of photographs Mannheimer Bestandsaufnahme (2002/2004) only reveals its full meaning when its original context is known: when, in 2002, he sold a private collector his complete personal effects (furniture, clothes, books… etc) - used in his sculptures over a number of years - Slotawa decided to create a photographic archive of all the objects no longer in his possession.

In 2000, in a park in Ljubljana, Simon Starling came upon fragments of a bottle of "Union" brand beer mixed with broken glass from one of the park lights created by famous Slovenian designer Josef Plecnik. Gluing the pieces back together in Plecnik, Union, the artist retraces their history and their temporary coexistence, thus offering an open-ended narrative. As a counterpoint to the exhibition, Wilhelm Sasnal's film Encyclopedia (1999/2003) presents a Polish version of the object containing the most exhaustive possible set of existing objects. The images of the pages of the book flick by so rapidly that the viewer has only enough time to recognise the letters at the start of each entry and the backup illustrations.

The objects making up Objet a' part convey the meaning inherent in an already formulated thought, comment on their own properties or create a space conducive to viewer perception. Coming to terms with the object not only entails a rapport with the language that names it, but also references the person it stems from.

Voice Figures
Performance by Nick Laessing and Esmaralda
Nick Laessing recreated an Eidophone, invented by Margarett Watts Hughes at the end of the 19th Century. This object, which includes a membrane scattered by powder, makes visible the air vibrations set up by the singer.
Saturday 24 June, from 6-8 pm at La Galerie

Guided tour of the exhibition by Bettina Klein
Sunday 11 June, from 3-4 pm at La Galerie