The exhibition aims on the one hand at illustrating the evolution and variety of architecture associated with sports arenas and on the other at showing through a series of achievements in master building how sports stadiums are being used more and more to experiment with new constructions and ways of developing building design. 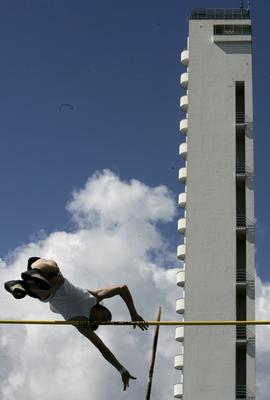 From antique stadiums to modern arenas

Featuring prominently in Germany’s sporting year 2006 is the FIFA World Cup. To mark this event, the Architecture Museum of the TU Munich is holding an exhibition entitled >>Architecture+Sport. From stadiums of the antiquity to the modern arena<<. It provides a multi-facetted insight into the history, development, significance and construction of sports sites and complexes. Games and tournaments have been an important part of social activity ever since the antiquity. They have adapted to changes in society, responding to its ideals and ideologies; this makes sports arenas not only indicators of architectural progress but also a reflection of social, cultural and political change.

The exhibition begins with an overview of the history of sports sites. It takes visitors from stadiums of the antiquity and arenas such as the Colosseum in Rome or the Byzantine Hippodrome, to sites of medieval tournaments, ball grounds of early modern times and to gymnasiums and sports facilities for workers and the broad public in the 19th and 20th century. Models, drawings, engravings, paintings and photos all document the emergence of different kinds of sport and sports arenas.

The second part of the exhibition shows how sport and the building of sports facilities gained increasing social relevance in the course of the 20th century. Sport has become both a means of national identification in mass societies and also the overarching element of internationalisation reaching out beyond nations. On a major scale, sport is turning into a powerful economic factor and influential media event. Leading works like those of Le Corbusier, Pier Luigi Nervi, Kenzo Tange, Renzo Piano and Zaha Hadid best illustrate the growing significance and symbolism of sports arenas.

The spectrum of developments in sports architecture is particularly well demonstrated in complexes built for the Olympic Games, starting with the first Olympics in Athens in 1896 and going right through to plans for the Games in Peking in 2008 and London in 2012.

The building of sports facilities as a way of experimenting with constructions and technology is presented and explained in the third part of the exhibition. The media presence of sport and the enormous investments involved in building sports arenas are increasingly inspiring architects to come up with innovative constructions: new support structures and moving roofs with spectacular dimensions and effects are being tried out and put into practice. Munich’s Allianz Arena of Herzog & de Meuron, the Wembley National Stadium of Norman Foster, the Stadion of Souto de Moura in Braga or the NatWest Media Center of Future Systems in London are just a few examples of modern arenas whose original models are on display.

Accompanying the exhibition is an Edition Minerva publication with essays by experts on architecture, construction and sporting history. (224 pages and some 200 pictures, mainly in colour, price 20 Euro).

The exhibition is supported by the foundation Stiftung Pinakothek der Moderne.