Paintings. In a muted palette of colors the Dusseldorf-based artist assembles individual, reduced figures and objects into a bizarre whole, which is reminiscent of the strangeness of Magritte’s pictorial spaces. 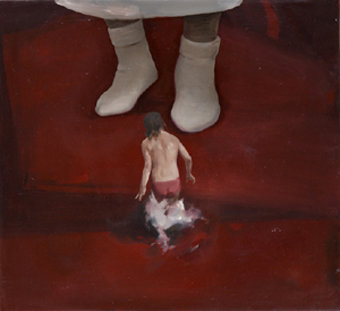 Oda Jaune’s paintings pose riddles that do not provide solutions. This is also the reason why her works do not bear titles. In a muted palette of colors the Dusseldorf-based artist (born in 1979 in Sofia, Bulgaria) assembles individual, reduced figures and objects into a bizarre whole, which is reminiscent of the strangeness of Magritte’s pictorial spaces.

The artist composes her paintings in an old-masterly manner, which lends them at first glance the balanced appearance of stage-like scenarios, as they were brought to a climax in the painting of Mannerism and the Baroque era. The clear economy of her colors and formal elements, which she immerses in a dim, unreal light, bring to mind the pittura metafisica of Giorgio de Chirico, who at the beginning of the 20th century lead the rationally trained perception of the viewers astray with peculiar shadow plays.

The illogical juxtaposition of pictorial elements that have about as much in common with one another as do the famous umbrella and the sewing machine evokes surrealist precursors such as Rene' Magritte or Max Ernst. And yet Oda Jaune does not derive her motifs from history, but rather from her immediate environment, which is determined by vacation snapshots, train journeys, magazines, and by the Internet. She thereby clearly posits her paintings within the 21st century. Thus, Oda Jaune found the cloudy background for the woman in red shorts on a poster of the punk-rock band Rage against the Machine, which in turn depicts the famous photograph of a burning Tibetan monk.

Oda Jaune’s paintings are confusing and uncanny. They suggest familiarity by taking up commonly known pictorial schemes from art history, which in the next moment become distorted to grotesques of the 21st century. They speak of dark fantasies and fears, of sensuality and decline. They first wink at us conspiratorially, only to lure us into a world in which the well known suddenly reveals itself as threatening, bizarre, and alarming.