Pythagoras. Using television, as well as the modalities of single channel videotape and sculptural/installation formats, he imbued the electronic moving image with new meanings. Paik's investigations into video and television and his key role in transforming the electronic moving image into an artist's medium are part of the history of the media arts. 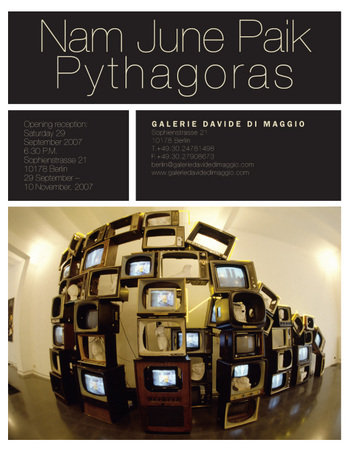 Unanimously considered the father of the video art, Paik's initial artistic explorations of the mass media of television were presented in his first solo exhibition in 1963, Exposition of Music—Electronic Television, at the Galerie Parnass in Wuppertal, Germany. This milestone exhibition featured Paik's prepared televisions. Paik altered the sets to distort their reception of broadcast transmissions and scattered them about the room, on their sides and upside down. He also created interactive video works that transformed the viewers' relationship to the medium. With these first steps began an astonishing effusion of ideas and invention that over the next 30 years would play a profound role in the introduction and acceptance of the electronic moving image into the realm of art.

In 1964 Paik moved to New York and continued his explorations of television and video, and, by the late 1960s, was at the forefront of a new generation of artists creating an aesthetic discourse out of television and the moving image. Throughout the 1970s and 1980s, Paik also worked as a teacher and an activist, supporting other artists and working to realize the potential of the emerging medium. Along with his remarkable sequence of videotapes and projects for television—featuring collaborations with friends Laurie Anderson, Joseph Beuys, David Bowie, Cage, and Merce Cunningham—he created a series of installations that fundamentally changed video and redefined artistic practice.

Using television, as well as the modalities of single channel videotape and sculptural/installation formats, he imbued the electronic moving image with new meanings. Paik's investigations into video and television and his key role in transforming the electronic moving image into an artist's medium are part of the history of the media arts. He put the video image into a vast array of formal configurations, and thus added an entirely new dimension to the form of sculpture and the parameters of installation art. He transformed the very instrumentality of the video medium through a process that expressed his deep insights into electronic technology and his understanding of how to reconceived television, to "turn it inside out" and render something entirely new. Paik's imagery has not been predetermined or limited by the technologies of video or the system of television. Rather, he altered the materiality and composition of the electronic image and its placement within a space and on television and, in the process, defined a new form of creative expression. Paik's understanding of the power of the moving image began as an intuitive perception of an emerging technology, which he seized upon and transformed.

Paik reminded us that we must recall the avant-garde movements of the 1960s and learn from their conceptual foundation, which expressed the need to create alternative forms of expression out of the very technologies that impact our lives. His work is a statement of liberation, demonstrating that the potential for innovation and new possibilities must not be lost, but must be continually remained and remade by the artist.

Nam June Paik was born in Seoul in 1932, studied art history at Tokyo University, where he wrote his thesis on Modernist composer Arnold Schoenberg. He went to Germany to pursue his interest in avant-garde music and performance at Ludwig-Maximilians Universitaet, Munich. While studying in Germany, Paik met the composers Karlheinz Stockhausen and John Cage and the conceptual artists Joseph Beuys and Wolf Vostell whose ideas had a tremendous influence on his work. Nam June Paik then began participating in the Fluxus movement He made his big debut at an exhibition known as, Exposition of Music-Electronic Television in 1963 in Wuppertal which earned him recognition as the inventor of video art in which he scattered televisions everywhere, and used magnets to alter or distort their images.In 1964, Paik moved to New York, and began working with classical cellist Charlotte Moorman, to combine his video, music, and performance. In 1966 he made his first multi-monitor installations working with magnetically distorted TV recordings. A retrospective of Paik's work was held at the Whitney Museum of American Art in the spring of 1982. During the New Year's Day celebration in January 1, 1984, he aired Good Morning, Mr. Orwell, with the participation of John Cage, Salvador Dalí, Laurie Anderson, Joseph Beuys, Merce Cunningham, Allen Ginsberg and Peter Orlovsky, George Plimpton.

From "TV Bra for living Sculpures" with cellist Charlotte Moorman in 1969 to "Good Morning, Mr. Orwell" a live interactive satellite broadcast between New York and Paris in 1984, Paik was recognized as one of the most influential contemporary artist. Paik is perhaps the only artists of Korean descent who gathered constant worldwide attention an exhibited at the world's leading museums including the Guggenheim and Whitney Museums in New York, the Guggenheim Bilbao in Spain and the Centre Pompidou in Paris.

In 1996 Nam June Paik had a stroke which left him paralyzed the left side of his body and left him wheelchair-bound. But he continued to explore television sculpture, robotic devices and giant video walls - staging the performance "Hommage à John Cage" as recently as autumn 2004.

He won numerous awards, including Best Pavilion at the 1993 Venice Biennale.

A final retrospective of his work was held in 2000 at the Guggenheim Museum in New York, integrating the unique space of the museum into the exhibition itself.