Post realite, new bronze sculptures. Wang Du is not a critical artist. He works in a place that does not kit himself out in the showy rags of the activist artist. Acting as the media's double, he pretends to accept the duplicity in order to get beyond morality by taking propaganda images as his models. "The media are the air, blood, nearly everything we have lived" W. Du 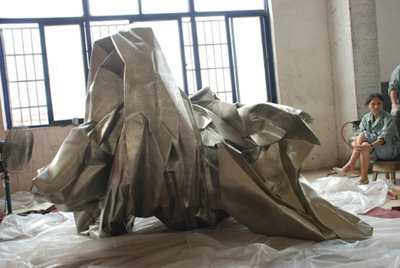 The show is on view at Arndt & Partenr temporary (Zimmerstarße 88-90 - next to DAAD GAllery, ground floor)

Information is the world’s rumor. Newsflashes, commercial breaks, fragments of data, messages, signals, these things constitute the environment we move around in. Further, they offer a preeminent referential framework for the many decisions, actions and fantasies that punctuate our days and nights. Wang Du has a wonderful phrase that expresses that encroachment on life’s time and space by the information sphere, “The media are the air, blood, nearly everything we have lived.”1 The media have a life of their own, like an autonomous organism, beyond any control. [...]

Today, a piece of information is above all an image. If we broaden its sense to include advertising and propaganda, the information image is what Wang Du in fact works with. It is the raw material of his activity as an artist, who completely reconfigured his work in terms of its concepts, methods and forms in the early 90s (when he arrived in the West). Dubbing his workplace in the outskirts of Paris the Wang Du Studio he devised an eloquent name for where he lives and works, locating himself at an original juncture of the flow of information and the production of forms.
In the American sense of the word, studio challenges the myth of the artist’s atelier as a secret closed-off place where the alchemy of artistic creation is carried out. The studio Wang Du is referring to is rather that strategic, crucial locus of the world of communications. Radio and television studios, dubbing or editing rooms, or special-effects labs are factories in a global network. Setting up the tools of his trade in the grand framework of a former mid-sized business, Wang Du has thus created his very own artist’s factory. The Wang Du Studio mischievously pits itself against the symbolic strongholds of the news business and the major studios [which] reformulate each day an ideal reality in an ever-growing proximity to the economy and politics. […]

Like a press editor-in-chief, Wang Du pages through, selects and cuts out information or advertising photographs, which go to form the models for his art. However the methods are not those that are taught in journalism schools and which figure prominently in the code of ethics of the professional information media. Wang Du is more of a practitioner of a new form of Gonzo journalism as it has been renewed in the past few years by amateur bloggers on the internet, who create their own information websites without claim of objectivity or verification of their sources—quite the opposite.
“I want to be a media.” When Wang Du came up with this now famous declaration in the grand tradition of artists’ statements, he was of course openly referring to Warhol's ambitions to be a press baron and producer of cable television. But above all, Wang Du was placing himself at the very heart of current theoretical and practical developments in the information system, precisely when, according to Ignacio Ramonet, the founding event of a new informational equation was playing out, i.e., during the Clinton-Lewinsky scandal. That mix of deviant fairytale and saga marks the sudden emergence of a new medium. It was in fact Matt Drudge’s internet site (The Drudge Report, where gossip, leaks and unsubstantiated rumors are published) that revealed the affair, scooping the major media.2 There now appeared a new media operator, the self-media, who was coming into his own as the global information age was starting. 3

Wang Du is not a critical artist. He works in a place that does not kit himself out in the showy rags of the activist artist. Acting as the media’s double, he pretends to accept the duplicity in order to get beyond morality by taking propaganda images as his models. The media are imbued with the dual logic that marks all instances of power in hypermodern society, infusing information with ambivalence. It is the ambivalence of information that is indispensable to the proper functioning of democracy while being an agent in the construction of consent and the control of public opinion through the mechanisms of propaganda. To shed light on that world, that place beyond candid morality, you have to enter the false image to be able to point out the truth of the system.
Wang Du's sculpture reproduces the initial framing of the image selected by the photographer. But the artist also acts, using fragmentation but in terms of volume, i.e., in a much more physical and spectacular way. Rendered in three dimensions, and monumentally enlarged the distortions produced by the optical aberrations of the media’s deforming lens generate images that are monstrous, grotesque, obscene, like a swelling of the object-images that make up the information show business. This process of re-presentation allows Wang Du to bluntly lay bare the spectacle of reality.

Since 2001, alongside the plastic surgery he performs on images, Wang Du has also applied his monumental enlargements to the very pages of the newspaper or the cover of magazines. Wang Du crumples up the sheet of paper into a ball, like the kind we intend to toss in the wastepaper basket. To that act of negating information as well as affirming the extremely fleeting and volatile character of daily news, Wang Du then applies his method of playing with scale. [...] Le Tapis du piéton (2003) features a straightforward metaphor of the collapse of the Twin Towers by transposing the gesture of trampling a magazine under foot into both a sculpture-generating procedure and an experience of the work of art, offered to the heels of passing visitors.

Wang Du has carried out a highly personal synthesis of the various propaganda models he has come to know throughout his life, either in China, Europe or the United States. Rather than use the term propaganda we might employ a brand-new neologism to conjure up Wang Du more accurately, i.e., Infoganda.4 In a suspicious era characterized by a wave of information of doubtful veracity, in the face of this crisis of uncontrolled communicational madness, Wang Du’s answer lies in No Comment (2001), an immense trashcan that makes clear the perishable nature of the newspapers, television sets turned to Euronews and computers filling it. Wang Du places side by side a future as commodity for information and a future as a world to itself for this absolute commodity. Intox [brainwashing] or info? Infox!

1. Wang Du, interview with Pierre Bal-Blanc and Pascal Beausse, Wang Du Magazine, Design Mental Paris 2001, 214.
2. Cf. Ignacio Ramonet, La Tyrannie de la communication, Éditions Galilée, Paris 1999, 18-22.
3. The self-media is an autonomous, individual entity that produces and broadcasts informational materials outside the professional sphere of the mass media. It is a response to two things, the convergence of and new accessibility to communication tools and techniques, and the worldwide awareness of the need for a civic alternative to the monopoly of the imaginary exercised by the mass-media system. See Pascal Beausse, Information - Inquiries into the Real and the Self-Media, in: Contemporary Practices: Art as Experience, Dis Voir, Paris 1999.
4. Apparently the term was coined by Bob Corduroy (on The Daily Show of 17 March 2004), who was making an ironic and clear-eyed assessment of the expansion of faux journalism at the expense of the real, trustworthy kind. Infoganda involves the production of rigged news. It can be defined as the act of using public information networks in a deceptive, underhanded way, or with the intention to harm, in order to broadcast an apparently plausible, hidden propagandist message. See Richard Dawkins, The Selfish Gene, Oxford University Press, Oxford 1992 (First edition: 1976).

30 September through 24 November 2007
Opening hours after ART FORUM:
Tuesday to Friday, noon to 5pm; Saturday, 11am to 6pm