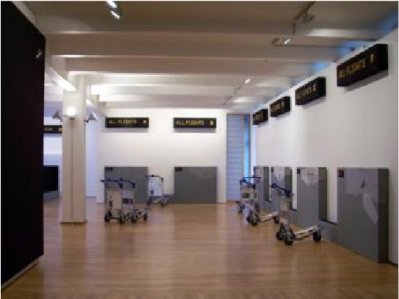 Yin Xiuzhen created an installation using the roof tiles of demolished houses that once lined old Beijing hutongs for her first exhibition in Berlin in 1998. She stuck one photograph reflecting the inhabitants’ lives onto each grey tile: men repairing things, women cooking and washing, playing children...

In 2001, Yin Xiuzhen showed monumental prints in a large exhibition space and created a sound installation for the 'Living in Time' exhibition at the Hamburger Bahnhof - Museum fur Gegenwart (Berlin's museum for contemporary art). These depicted people singing on a market place, old men who had brought their birds outside and groups of people playing the board game mahjong on the street. The artist documented public spaces and cityscapes that were already in the process of disappearing because they had to make way for skyscrapers and urban motorways.

Later, Yin surprised viewers with her 'Suitcases', into which sculptures made of cloth had been sewn. Each suitcase represented the cityscape of a place that she had visited as an artist: Shanghai, Singapore, Lhasa, New York, Vancouver, Sydney and Berlin. The artist travelled the world with her 'Suitcases'. The sculptures of prominent landmarks such as the Shanghai Television Tower, the Potala Palace, the Sydney Opera House and the Brandenburg Gate in Berlin were made from used clothing: Yin Xiuzhen received the trousers, shirts, jackets and underwear from friends and fellow artists living in Shanghai, Singapore, Sydney, New York and Berlin.

Despite their formal differences, Yin Xiuzhen's works are characterised by notions of saving and documenting, of the spatial transfer of identities, of the identity of her Beijing neighbours and friends, and of the artist’s identity as a traveller.

Travel, aeroplanes and airports have been among Yin Xiuzhen's central themes for many years now. For an installation in one of Siemens’s Beijing offices, she created a room-filling aeroplane made of the white blouses and shirts of employees. After 9/11, the artist sewed and knitted 'soft weapons' out of fabric and wool. She travelled with these bombs, chemicals, pistols and knives in reaction to the increased security checks at international airports.

'Dangerous Things in Baggage', and the artist's experiences as she travelled with them, inspired her to create the gallery-filling work INTERNATIONAL AIRPORT TERMINAL 1, which will be shown for the first time in ALEXANDER OCHS GALLERIES BERLIN I BEIJING. During her last trip to Berlin, Yin Xiuzhen visited Berlin's Tempelhof Airport, threatened with closure, several times, in order to study its architecture. The gallery space will house a complete airport with check-in desks, gates, security, departure boards and conveyor belts. The invitations are in the form of plane tickets, the catalogue is a logbook. Of course, the artist remains consistent in her choice of materials: think global - act local! The old clothes from which the pieces are made were collected and bought from her neighbours in Beijing.

The exhibition will be opened by Stephanie Tasch, the purser on this flight. It lands at the newly-opened INTERNATIONAL AIRPORT TERMINAL 1 on 28th September 2006, 7 p.m. - 10 p.m. The artist will be present.

For further information please do not hesitate to contact Ulrike Grelck. Tel. +49 (30) 28391387
ulrike@alexanderochs-galleries.de