Charles Ray: black & white / More than the World: Works from the Collection 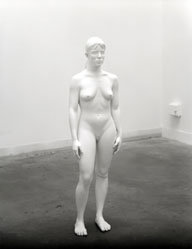 With great pleasure Astrup Fearnley Museum of Modern Art presents the exhibition “black & white", with works by American artist Charles Ray (b. 1953). Ray has had a unique position within contemporary art the last 30 years. His works are rich in art historical references, yet they also stand out as having an unmistakeable originality.

Intrigued by the vocabulary and thematics of Anthony Caro’s practice - including the junction of different elements within a work, and a work’s relationship to surrounding space - Ray has cleverly worked through the legacy of minimalism in his pursuit of extra-formalistic potentialities. Introducing his body into the creative process, and into the art object itself, the artist creates ‘performative sculptures’ which generate ‘emanative’ relationships between spectators and artworks.

Charles Ray doesn’t really create forms but he isn’t an appropriationist either. He manipulates existing forms and figures like altered readymades, or quotes. His practice is a cycle of reprises. And with these borrowed and renewed elements he creates spectacular surprises, sensations through a play of materials, and an unexpected manipulation of weight, size and perception. Ray’s art is endlessly witty and his work is at once extremely funny, tragic-comic and beautiful.

Behind the first level of appearance and the more obvious connotations of cultural and social symbols lies a reflection that is more abstract as well as more sensitive. These are the individual forces that manipulate the perception and experience of the spectator and they form the basis of Ray’s oeuvre. Indeed, the mechanism of most of his work is constructed around a duality: with the passing of time, his art frequently reveals itself to be something else than one observes at first glance.

This explains why Ray’s works are always conceived in layers, both conceptually and materially as well. In the process of revelation, a physiologically intriguing if not disturbing experience of puzzling strangeness occurs. Aiming to give sense and meaning to the form itself - by rephrasing, transforming or subverting the initial structure - the artist charges the objects with emotional meaning in a situation of attraction or repulsion. This is where the sensation takes place; Ray’s sublime moment. It is simultaneously cognitive and physical, and creates a certain ‘kinesthetic aspect’.

Ray’s practice bridges modernism, pop, minimalism and conceptualism. Whatever nomenclature one chooses to describe his methodology, critical distance, intelligent reflection and genuine intuition anchor his production. He is a master of adopting and recreating art forms that translate, illustrate, represent and perform both obvious and obscure forces which cumulatively thrust the spectator into a captivating experience.

The exhibition includes art from the early 1970s and up to today, with some completely new works shown for the first time. The curators for the exhibition are Gunnar B. Kvaran and Hanne Beate Ueland. The exhibition is organized in close collaboration with the artist.

More than the World

Works from the Astrup Fearnley Collection

With the ambitious title “More than the World", we welcome you to an exhibition of works by some of the foremost artists of our time. Several of them belong to an American art-milieu from the 1980’s that concerned itself particularly with the relationship between reality and representation. In an age when direct experience has been displaced by simulation through diverse media, many artists react by transferring already-existing materials and, in various ways, appropriating them as the material from which to create their own works. Although, from a traditional modernistic perspective, one can argue that nothing new is added when an artist—say Richard Prince—uses pictures from advertising campaigns in his works, we, in this exhibition, would like to show how these artists take their point of departure from the reality of their own popular culture, and create works that interrogate the artwork’s originality. We will see how Jeff Koons, Cindy Sherman and others use appropriation and simulation, and through these means, allow for a wider, more nuanced understanding of our own times.

Andy Warhol and the Pop Artists, in their attempt to reduce the exalted status of art and aesthetics, utilized aesthetic devices from advertising and popular culture. This revolutionary reorientation is now defined as aesthetic theory in its own right, and constitutes the point of origin for the works in this exhibition. Pop Art’s aesthetic are not unique or exalted, but are appropriated from dominating popular-cultural visions we recognize and encounter through mass media. Here in the exhibition we present the painting Big Electric Chair from Warhol’s well-known “Catastrophe Series". The motifs in the series are derived from the mass media’s presentation of accidents and deaths, a presentation that, to a large degree, dictates the general comprehension of such events. In spite of Warhol’s desire to mirror the world around him without committing himself to a particular position, it is easy to read the picture as a contemporary political comment on the debate over the American justice system, and the mass media’s role in that debate. Parallel to pop culture, French philosophers such as Guy Debord and Jean Baudrillard wrote about the influence of mass media society on the individual. In “The Society of the Spectacle" from 1967, Guy Debord describes the society as a theatrical stage where everything original and alive has been reduced to a representation. This and similar philosophical reflections were important backdrops for the American artist-milieu throughout the 1970s and ‘80s.

Cindy Sherman, in her artistic practice, has examined how different roles and conventions are significant for the modern person’s—and particularly women’s—self-image and self-understanding. Already during the 1970s she created a series of so-called Film Stills, which illuminate several interesting aspects of the simulation-society. The film is one of our most important common cultural references. Today clips from well-known films have just as strong an iconography as medieval religious pictures. Expression, posture and clothing are signs that can be interpreted by a diverse international audience. Sherman operates from these premises in her Film Stills. The black-and-white photographs seem immediately recognizable, and we easily understand them as scenes from some well-known film. In reality, the pictures are constructed from Sherman’s ideas about precisely just such moments in classic film history. They are not excerpts from existing films, but lead us to believe that we have seen them before, because of a tight connection to the visual grammar and aesthetics of classic film.

In contrast to Sherman, Sherrie Levine has gathered her motifs from the repertoire of a well-known photographer. Walker Evens, on commission from the American government, photographed poor American farmers during the 1930. The pictures, which initially were intended as illustration for scientific research on livelihoods, also captured the suffering and deeply human aspects of the situation. Walker Evans has been recognized by posterity as one of the foremost early modernistic photographers in the USA, one of the first who managed to capture human emotions in his photographs. By re-photographing the well-known photo from an exhibition catalogue, and recreating it in two versions—one positive, the other negative—Sherrie Levine questions the “art-value" or “aura" that characterises the unique and original artwork.

While Sherrie Levine and Louise Lawler photograph existing artworks and interrogate the artwork’s position and how its value is established, Richard Prince goes to the advertisement and entertainment industry to find his motifs. One of his most noted works is Spiritual America, a picture that shows the adolescent actress Broke Shields in an erotically charged environment. There is an unmistakeable ironic relationship between the grownup, made-up face and the young body, moreover, the work created a scandal when Prince exhibited it for the first time in a little Manhattan gallery in 1983. Taken in connection with the making of a film ten years earlier, the picture was never intended for the public’s gaze. In the context of the artworld, and with a title borrowed from the well-known American photographer Alfred Stieglitz, the picture stands out as one of the most interesting examples of the significance of appropriation art as contemporary artistic expression.

The greatest upheaval in the American art scene during the 1980s came from Jeff Koons’ exhibition “Banality" in 1988. In earlier works, Koons had, among other things, appropriated billboard advertisements and well-established luxury items, and transferred these into new materials. With the “Banality"-series, Koons wanted to press further by creating works that were not based on existing objects; rather, they were freely modelled out from a conception of American middle-class aesthetics. With his point of origin in a culturally acquired, class-determined taste, Koons created several large sculptures in wood and porcelain. They were received with incredulity and antipathy by the critics. Michael Jackson & Bubbles is one of the most central works from this series. In addition to being the world’s largest porcelain sculpture, it is a unique representation of one of the world’s most profiled pop stars, in a visual language inspired by porcelain knick-knacks and kitsch-culture. The kitsch-culture Koons observed in the American middleclass is not limited to one specific country or culture, but is perhaps one of the most fascinating manifestations of how mass production has shifted the relationship between the original and the reproduction. The same can be said for the pop star Michael Jackson, who, in his yearning for perfection, has changed his own appearance to the point where he appears today as a disrupted version of the original Michael Jackson.

Like Koons, Charles Ray is concerned with the idealization that is forced upon people by market forces. In the work Male Mannequin, he has taken as his point of departure a male mannequin. The mannequin’s non-distinctive, general appearance is intended to appeal to the consumer. The lack of particular characteristics or identity allows the customer to project his own dreams and desires onto the mannequin, and the products it is intended to advertise. By equipping the normally so sexually neutral figure with a replica of his own genitalia, Ray emphasizes sexuality as one of the foundational aspects of human identity. Therewith, the work can be read as a positive response to human nature’s strength and power of adaptability.

The art of Robert Gober also has a personal starting point, and several of his works are related to events from his childhood. Most are based on existing objects, yet in contrast to Jeff Koons’ Dolphin, Gober’s Functioning Sink is emphatically handmade. As such, Gober imbues a psychological aspect, which ties the mass-produced object to the artist’s own experiences and dreams. Rachel Whiteread also views the objects and spaces she is surrounded with, yet, by focusing on the negative spaces, she presents the everyday objects from a new perspective, and shows us the beauty in these non-places. Whiteread’s works are therefore good examples of how the artist can show us something over and beyond the predictable and well known, also by starting from already-existing pictures and objects.