A multi-media installation which explores contemporary stereotypes of black visual traditions. Melding disparate elements of African and African American history with found objects, Robert A. Pruitt creates an array of works including drawing, sculpture, and video. In the Project Gallery photographs by Laurie Giardino. 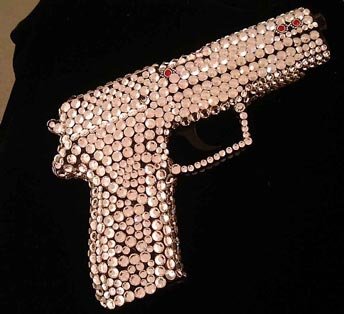 in the Main Gallery

"I Call My Brother Sun Because He Shines Like One" is a multi-media installation which explores contemporary stereotypes of African-Americans, adornment, black aesthetics, and black visual traditions. Melding disparate elements of African and African American history with found objects, Pruitt creates an array of works including drawing, sculpture, and video. For example, a .38 caliber prop gun emblazoned with the Nike "swoosh" logo and the silhouette of Air Jordan in mid-dunk is appropriately entitled Just Do It. As such, this piece delves into the notion of how black culture is co-opted and marketed back to black consumers. At the same time, Low Rider Art, a bicycle wheel with a highly polished chrome frame and a crushed velvet seat, plays with the idea of blacks as readymade artists, focussing their creative energies on personal possessions (i.e., bikes, cars, clothes, backyards, teeth) rather than investing in western ideas of art making.

Pruitt writes: II have been educated by the contemporary art system, but my neighborhood, and most of its residents, are unaware of this world, and that world is unaware of it. This is the dichotomy out of which I work. An inhabitant of two worlds, my work attempts to bridge the gap between African cultural traditions supposedly lost to African Americans, and contemporary art making tactics. I fuse Hip-hop sensibilities, rewritten histories, and penchant for the found, (or cheaply bought) object. I romanticize the revolutionary ideologies of the seventies, the dope fresh styles of the eighties, and the conceptual art making practices of the nineties. I collect objects, quotes, and events from my stereotypically disenfranchised neighborhood, bring them back to my studio, and mix them up to make art. My materials are artifacts stained with memory and meaning. I use these artifacts to make objects and images that expound on the black condition in America, and I use a chitlin circuit style of humor to sneak it into the subconscious of my audience.

Robert Pruitt lives and works in Houston, TX, and was recently featured in Splat Boom Pow! The Influence of Cartoons in Contemporary Art at the Contemporary Art Museum and Come Forward: Emerging Art in Texas at the Dallas Museum of Art.

Totowa Book of the Dead

in the Project Gallery

Clementine Gallery announces the opening of Totowa Book of the Dead, a solo exhibition in the Project Gallery of photographs by Laurie Giardino. The show will run from November 30, 2006- January 6, 2007. A reception for the public will be held on Thursday, November 30th from 6-8 PM.

Totowa Book of the Dead recalls the artist's coming of age in the small, working class town of Totowa, New Jersey. Taken between the years of 1976 and 1984, the silver gelatin prints serve as a personal documentary of an American community during the disillusionment that accompanied the disastrous economic policies of Reagan's administration, and the devastating toll it took on the town's youth. Accordingly, it is a narrative marked largely by grief and loss. Giardino writes: "many of my friends were dying untimely deaths; car crashes, cancer, drugs, drowning, suicides. Then the members of my family started to die. I had pictures of them all. As the years passed, I noticed how much death and photography had inundated my life...I never expected to see the day that my pictures would outlive the people in them. I never expected that the people I love would be the ones to fade away." Depicted with a cinematic immediacy, the figures in the photographs take on an almost spectral quality when seen in the larger context of their stories. They pose by pinball machines and light cigarettes, hang out on corners and lounge at the local diner. Imbued with a palpable intimacy, these photographs act retrospectively as a meditation on mortality and the nature of memory.

Laurie Giardino was awarded a Gregory Millard Fellowship from the New York Foundation of the Arts in 1999 for Totowa Book of the Dead, including a nonfiction essay which will be available at the gallery during the exhibition.

Laurie Giardino, Totowa Book of the Dead, will be on view during regular gallery hours, Tuesday- Saturday, 11- 6 PM and by appointment.