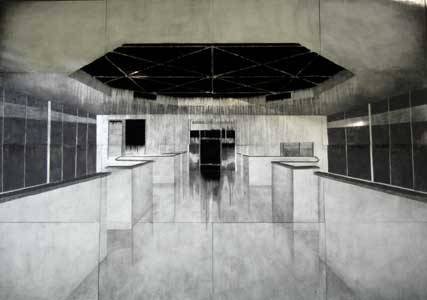 “The Reality is what we perceive from our immediate environment, that is a mental construction. History and morality are also construction. We need to have a coherent History, therefore, we try to link all the events in a perspective to build up a coherent 'narrative'. Our history, our scale of values, our way of thinking are irrational."( M. B)

Marc Bauer’s work examines matters of memory and remembrance as well as relationships based on force and domination. Through a blend of collective memory and his own personal recall, he confronts impressions from the past with those of his own time and builds a narration based on astonishingly diverse sources: archival images, family photo albums, his own childhood memories.

Weaving unexpected bonds between these elements, he develops a story just as memories are built: with fragments, gliding from one period to another and by superimposition of impressions that endlessly echo one another.
His show at the Praz-Delavallade gallery is titled “Abenland", or “Evening land", which refers to the West as well as to twilight on earth. For this show, Marc Bauer was inspired by Heidegger’s Abendgesprach, written in 1945 as Heidegger remained without news of his two sons held prisoner in a Russian camp. It is a dialogue between two young men, named respectively “the younger one" and “the older one", both prisoners in a camp at the edge of a forest.
As he usually does, Marc Bauer combines this with other sources, other stories: a lunar landscape drawn by Petr Ginz, deported to Theresienstadt camp and dead in Auschwitz at age 16, a photo, gleaned on the internet, of four arm-in-arm skinheads, a moonscape, a portrait of the Pope….

All these disparate images create a wasteland, a bleak and terrifying universe, through an ensemble of drawings that confront one another, suggest shades of meaning, refer to each other. As remembrances of a collective story, or perhaps childhood memories, these drawings define a haunting landscape. The stream of thought of Marc Bauer’s work produces a show that raises questions about devastation as a consequence of relationships based on coercion, be they, familial, institutional, or social.