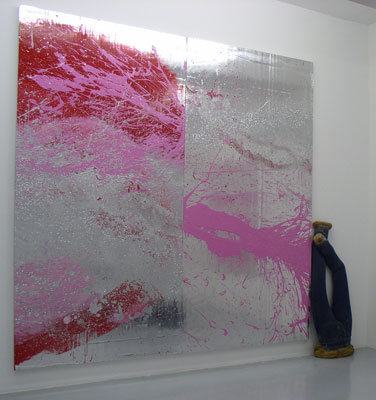 Rob Pruitt burst onto the American scene in the late 1980s as one half of a "bad boy" duo with fellow artist Jack Early. Then in 1992 an exhibition at the Leo Castelli gallery put an abrupt end to this career, the pair finding themselves boycotted for making too free with the sacred cows of African-American culture and overstepping the bounds of ethnic political correctness. It was not until 1997 that Rob Pruitt made his return, timidly at first with a mouse pulling a banner inscribed "You must love me", then more emphatically with a Cocaine Buffet that brought the entire New York art community to its knees: combining a redemptive cynicism with a singular, radically committed agenda, he took his revenge with a denunciation of the art world's contradictions and excesses, at the same time defending the purity of his intentions with fountains made from mineral water cartons that harked back to such contemporary art icons as Duchamp and Warhol. His glittery paintings of pandas slammed the fate inflicted on the species, while his broad-stroke drawings of Paris Hilton drained all the glamour from her image. Bringing a fetching dose of humour to his survey of art history codes and the rules of the market, Pruitt indexed the power of images within a gamut extending from fascination to objectivity.

Air de Paris is delighted to be presenting this new group of paintings and sculptures. Stretchers made from insulation panels are provided with a silvery, reflective surface which is splashed with red and pink paint and then sprinkled with glitter. Spread across the walls, these monumental pieces tweak the heroic history of American abstract expressionism by bringing in a zany palette and leaving the nature of their components on display.In the middle of the gallery are quirkily laid out blue jeans stuffed with concrete or bread dough and respectively air-dried or cooked in a wood-fired baker's oven. The materials and some of the "at rest" poses make these scenes an allegory of work. Frontal postures reference the virile image of the cowboy, while other, more complex ones suggest sexual positions or mathematical shapes. These blind sculptures are reflected in the gleaming panels that surround them, but there is no illusionist intent here: at the core of Rob Pruitt's work are the materials--their inherent properties, their decorative qualities and their capacity to engender stories.

With the generous backing of Marc Jacobs and the Compagnons boulangers Poilane.

Mirka Lugosi is, she says, a "painter of images".

This reminds me of the nostalgic world of childhood, of those pictures handed out by your teacher or found with bars of chocolate: you glued them in an album to dream over. "Real" painting, for her, is something too serious: to enormous canvases in oils or acrylic she prefers paper, gouache, ink, pencil and colour pencil. Sizewise her works are rarely bigger than a simple sheet of letter paper--and very often closer to miniatures. The reason she works on such a small scale, I'm told, is that her studio is limited to her kitchen table. And in her strange, crowded boudoirs she explores the infinite possibilities of a range of cruel females accompanied by brazen little girls that Hans Bellmer would not have been ashamed of. Here, too, we are at no far remove from the dreamlike world of Valentine Hugo or, in a more technically accomplished but just as obsessional mode, of Ernst Haeckel and his Art Forms in Nature : similar, parallel worlds in which the individual detail is just as significant as the whole.

"Looking," Mirka Lugosi says, "is touching with the eyes." And it is true that the eye has to move in on her images. For in addition to their modest format, they seethe with microdetails that can only be fully grasped in close-up. In every way these pictures invite us to come on in, to pass through the looking glass.

Describing Mirka's images is no easy matter, for we cannot tell exactly what is being shown to us. Conversely, the feelings expressed are always very clear. The dominant one is certainly the desire that is virtually omnipresent in her oeuvre: the desire to see, touch, and enjoy that is the driving force behind these tales without words. Here dreams fuel the imagination and close observation enriches the manner (one cannot really speak of her technique, for her method is shifting and empirical). It could be said that everything in her work is destabilising, in terms both of content and realisation; yet the feeling we have as we look is always one of wonderment.

Air de Paris
32, rue Louise Weiss - Paris
The gallery is open from tuesday to saturday, from 11 pm to 7 pm.