On show a sequence of new neon works: the whole wall covering, seven-lined neon writings in the colours red, blue, yellow, white, green, pink. From the 60 on until today a red thread pulls itself by the work of the artist: the visualization of the interrelation of language, writing and meaning, of colour, light and space, of art and nature. 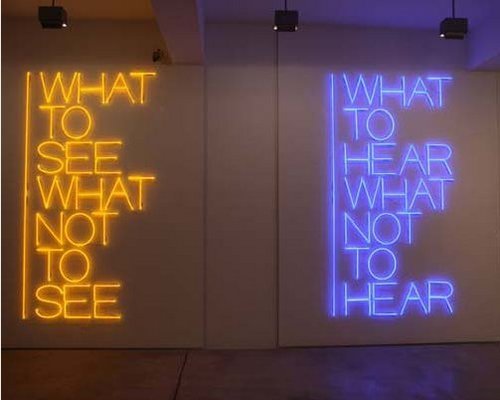 See, hear, feel, say, find, love - these statements to potential human perceptivity and to the possibility of speaking out our sensual perceptions are extended by other neon texts, which are mounted on the border between wall and ceiling. These text-lines open a dialogue over the visual arts, imagination, environment, lan-guage.

From the sixties on until today a red thread pulls itself by the work of Maurizio Nannucci: the visualization of the interrelation of language, writing and meaning, of colour, light and space, of art and nature. At the begin-ning of his artistic development Nannucci created - in the surrounding field of experimental art movements of the 60's Concrete poetry, Fluxus, Conceptual Art - his own repertoire of forms and linguistic signs crossing the borders of artistic disciplines. He produced works with text characters, which extract them-selves from the clear allocation to conventional artistic or literary presentation. Thereon his career continued to evolve from one artistic generation to the next.

The minimal structured texts of his continuously extended work-in-progress "Anthology" (1967/2007) load Nannucci with paradoxes, statements and poetic associations up. With the reduction of the artistic means on language and writing the artist pursues an aesthetic strategy, which directs the interest on cognitive processes of visual perception, in addition, the sensual component of the perception process is also in-cluded.

The language in its ambiguity as well as writing in their concrete plasticity uses Nannucci as message and medium. Art is communication, - this principle determines the art practice of the artist and forms the source for an editorial work broadly put on: editions, multiples, artist's books, sound-works as well as hundreds of ephemera supplement the artistic work.

Apart from his works with language the artist attaches special interest in colour. In the context of its ex-perimental colour and material studies Nannucci forms from 1967 ongoing neon tubes after its handwriting, thus he ranks among the pioneers of neon works in the contemporary art. As Nannucci conceives work from neon tubes, whose glass is dyed with "Farbpigmente", he transfers his monochrome word pictures of the start time on a lighted and colour-intensive material. With the use of lighted neon glass Nannucci leaves con-ventional "Bildtrager", and carries out a three-step from the sheet to the wall, from the wall into the room, from the interior into the external space.

Recently Nannucci realized in well known public spaces site-specific neon installations: "Polifonia" (2002) in the Auditorium of Rome, conceived by Renzo Piano, "Blauer Ring", (2003) in the Library of German Parlia-ment, Berlin, and "All art has been contemporary" (2005) on the facade of the Altes Museum, Museumsinsel, Berlin.

Maurizio Nannucci's works have been shown in more than three hundred exhibitions in international museums and art galleries. In Austria he exhibited his works in museums as Taxispalais, Innsbruck (1978) Wiener Secession (1995), Rupertinum, Salzburg (1998).

He has participated several times in the Documenta Kassel, in the Biennals of Venezia, Sydney, Sao Paulo, Istanbul and Valencia.