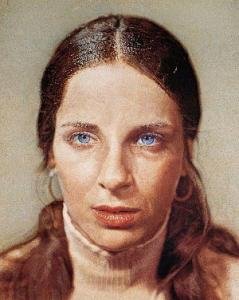 Chuck Close’s paintings employ the grid-dependent dispersal of neutral markmaking and clarity of process that are hallmarks of the late modernist abstraction created in the 1960s and 1970s. However, he has engaged these stratagems not in the pursuit of flat, geometry-dependent abstraction but in a full-blown revel in representational illusion. Since 1968 he has painted stunning, oversized portrait heads based upon and mediated by the neutral, mostly head-on, photographs he has taken of his subjects. This exhibition charts the panoply of variations Close has subjected his paintings to, from 1968 to 2006, in his constant challenges to his facility and in his striving to keep the making of his paintings fresh and vital.

In the paintings Close began in 1968, the neutral photograph of the head of a friend such as Richard Serra or Philip Glass or of himself was gridded off and transferred to the larger grid of a canvas measuring 9 x 7 feet. With barely a thimble full of black acrylic, employing a spray gun and other tools such as razor blades and electric erasers Close created a giant portrait head of remarkable photographic veracity, when seen from afar. When viewed close up, the painting teems with countless marks of seemingly abstract process – neutral marks that bare no recognizably autographic trace of the artist’s hand. Close intensified his dialogue between painting and photographic reproduction, when he turned to making portrait heads in full color, in the early 1970s. Mimicking the mechanical reproduction process of layering color separations of the primary colors to achieve a full spectrum of colors, Close painstakingly and labor intensively painted one layer at a time – red, yellow, and cyan – remarkably arriving at a seamless range of color.
By the end of the 1970s, Close began to seek out a more direct and physical means to achieve his ends; but he didn’t want to employ the expressive gestural strokes largely exhausted by previous generations of painters. He created a kind of surrogate painterliness with round modules of pulp paper in various gray tonalities that he urged into portrait heads. Even with such an unwieldy medium, he achieved remarkable likenesses – as he did, as well employing imprints of his inked fingers to create a stunning portrait of his wife’s grandmother, in 1985. However, the richness, depth of illusion, and variety available to the traditional means of painting ultimately led Close back to brush and oil paint. By 1987, tiny circular marks, now visibly aligned with the grid, transformed his subjects into shimmering mirages, at once more painted and more visibly systematized. He achieved the non-hierarchical alloverness so critical to modernist abstraction, while simultaneously creating the illusion of a three-dimensional head. In 1988, Close suffered a spinal aneurysm that left him seriously paralyzed. Determined to continue painting, he overcame his disability and learned how to paint with a brace on his hand. He learned so well that the paintings he has created since 1989 look like the inevitable continuation of those begun in 1987. The heads now became still more visibly painted with larger more idiosyncratic modules impinging upon the photographic likeness, opening up the face to a certain vulnerability and to a still more emphatic procedural clarity.

Close’s unique revivification of painterliness in the 1980s was part of a larger return to a more visibly intuitive painting that was, nonetheless, partially beholden to modernist strategies. Brice Marden’s calligraphy-inspired paintings and Carroll Dunham’s delirious organics may be counted amongst this return, as might be Albert Oehlen’s daringly impure abstractions. But already, in the late 1960s, Close, like some of his peers such as Jennifer Bartlett, Joe Zucker, and Sigmar Polke had begun to transform and subvert modernist abstraction into figuration and prepare the ground for what has come to be known as post-modernism.