Lights & Drawings. His projections, together with charcoal drawings, collages and digital studies are presented in 6 rooms. The works all revolve around the digital animation series 'The 7 Lights' which Chan has been working on since 2005 and which will ultimately consist of 7 pieces. 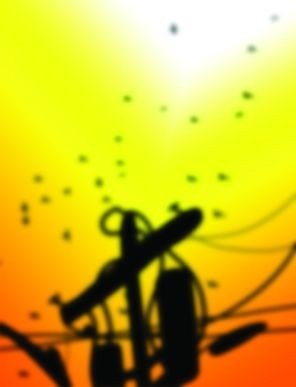 Light and shadow are the focus of the exhibition 'Lights & Drawings’ by American artist and activist Paul Chan (1973, Hong Kong). His projections, together with charcoal drawings, collages and digital studies are presented in six rooms. The works all revolve around the digital animation series The 7 Lights which Chan has been working on since 2005 and which will ultimately consist of seven pieces. This exhibition in Stedelijk Museum CS, Chan’s first major museum presentation in Europe, presents all the Lights Chan has completed so far.

The Lights series is described by some as a commentary on a world on the edge of disintegration. In the words of the artist, the series is about 'light and light that has been extinguished’. In the title, although the word light is literally crossed out, the horizontal line can also be read as a ray of light, and symbolizes the tension between light and dark which is the backdrop of Chan’s melancholy, sometimes sinister, animations.

With The 7 Lights Chan intended to make a group of works that deliver a physical experience. With one exception, the Lights are projected from the ceiling onto the floor, or partly on the floor and wall. The works are structured as a cycle of day and night, sunrise to sunset. They are mostly triangular or trapezoid in shape, and reminiscent of light pouring through a window - a window opening onto a faraway outside world, where only the shadows of events are visible.

In The 7 Lights a gamut of contradictions collides: upward and downward movements, inside-outside, slow-fast, light-dark, chaos-order, utopia and apocalypse, the sacred and the profane. In the cycle, Chan makes extensive reference to Christianity and religion in general.
'I don’t have much belief in faith’, says the artist in a recent interview. 'What I do believe in is looking at new ways to reinterpret, and even mistranslate, what we imagine as history into another form and I think that’s what art is for. Art is a sovereign place in which things can be up for grabs again’.

Biography
Paul Chan was born in Hong Kong in 1973 and grew up in Nebraska. He graduated with an MFA in Film, Video and New Media from Bard College in 2002, having earned his BFA in Video Digital Arts at the Art Institute of Chicago in 1996. Chan’s teaching activities included lecturing at the Graduate School of Fine Arts, the University of Pennsylvania and the School of the Arts Institute of Chicago. Chan lives and works in New York. His digital animations were previously exhibited at the Whitney Biennale 2006 in New York, the Institute of Contemporary Art, Boston, Para/site Art Space in Hong Kong, Portikus, Frankfurt, amongst others.

Brochure + Bulletin
A brochure with background information will accompany the exhibition. The Stedelijk Museum Bulletin no. 2 / 2007 (published at beginning of April) will also include an article on the work of Paul Chan, written by Martijn van Nieuwenhuyzen, the exhibition curator.