This group exhibition sets out to explore a number of different aspects of Black Square: the black square which negates the objective, figurative painting of the past as representing the objective world as a whole. The wall of paintings in the form of a Suprematist iconostasis as a boundary and transition between the objective and the non-objective world. In addition, the show aims to show the reception of Black Square in western European and American art from 1945 to the present day. 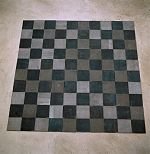 When Kasimir Malevich first showed his Black Square at The Last Futurist Exhibition 0.10 in Petrograd (St. Petersburg) in December 1915, the artist himself must have felt the need for a theoretical interpretation of this founding work of geometric abstract painting, as from then on he repeatedly provided new definitions and explanations for this “icon of the new art”, as he himself described it:

“When, in the year 1913, in my desperate attempt to free art from the ballast of objectivity, I took refuge in the square form and exhibited a picture which consisted of nothing more than a black square on a white field... This was no empty square which I had exhibited but rather the feeling of non-objectivity....

The square = feeling
The white field = the void beyond this feeling.”

This is a relatively precise definition by Malevich of what the black square, and the new concept of painting he developed from it – Suprematism (Lat. supremus, ‘highest’) – is meant to embody or evoke in the viewer: the feeling of non-objectivity and void.

The impression of a void, which Malevich also calls “nothingness”, is generated by the white ground that appears to be a limitless expanse lying behind the colour planes. The feeling of non-objectivity, on the other hand, is evoked by the painted forms which seem to float and ascend like weightless masses of colour inside the empty pictorial space. The coloured surfaces deduced from the black square on a white ground do indeed convey the sensation of floating weightlessly in the endless void of the white image space. As Malevich equates the feeling of weightlessness with that of non-objectivity, the flat units of colour floating in the empty white space represent a non-objective but nevertheless dynamically intense world.

Malevich developed these coloured forms floating in unmarked and unlimited space from the starting point of the Black Square. For him, therefore, it is a threshold or point of transition, as it were, between the objective diversity of the earthly world and the transcendental world of non-objective feelings. Malevich also describes this transition as an act of self-transformation. In his first programmatic text on Suprematism, for example, published to accompany 0.10, he writes: “But I transformed myself in the zero of form and emerged from nothing to creation (...)” In 1919, Malevich declared the space beyond the zero of form of the black square to be a realm of weightlessness and thus of non-objectivity as defined by him: “after me, comrade aviators sail into the chasm; I have set up the semaphores of Suprematism.”

Comprehending the black square as a threshold and passage into another, spiritual world where all objectivity has dissolved into the feeling of a void filled with energy and dynamic rhythm, is in keeping with the traditional conception of the icon as a visual representation of the next world in this world. Above all, the wall of icons in an Orthodox church is regarded by the faithful as the threshold and boundary between the earthly domain of the church and the divine realm beyond the iconostasis. In this sense, Malevich also wanted the black square on white ground to be seen as an icon, and the wall covered with Suprematist paintings as a kind of iconstasis. “And so I gaze searchingly into its mystical black space, which becomes a kind of new face of a Suprematist world, its outward appearance and spirit. I see within it something which people once saw in the face of God.”

Numerous statements by the artist confirm how strongly Malevich identified himself with the Black Square as the face of God. Thus he regards his reduction of the representational function of traditional painting to the zero of form of the black square, and the development of a non-objective painting from this zero of form, as a process of transformation of the individual self into a new, godlike übermensch. The source and legitimation of the Black Square in the pictorial conception of the icon is also revealed in the work’s formal appearance. As in the traditional icon, the white ground of the painting represents the boundlessness of space and the eternity of time, while the geometric units of colour are opaque and dazzlingly intense in both; at the same time there is a particular emphasis on the manual craftsmanship of the painter – in contrast to the precision and uniformity of mechanically produced forms.

The exhibition sets out to explore a number of different aspects of Black Square:
The black square which negates the objective, figurative painting of the past as representing the objective world as a whole.
The wall of paintings in the form of a Suprematist iconostasis as a boundary and transition between the objective and the non-objective world.

The explosive development of Suprematist painting among the Russian avant-garde artists, and their expression of criticism with painterly means. Pupils from Malevich’s inner circle, such as Kliun, Menkov, Suetin, Chashnik and El Lissitzky, will be represented in the exhibition with Suprematist works based upon the black square, as will the Constructivists, including Exter, Popova, Stepanova, Rozanova and Rodchenko, who critically opposed Malevich.

The use of the black square for the promotion of a life in non-objectivity and the design of “non-objective objects” and buildings (Planits). In addition, the exhibition aims to show the reception of Black Square in western European and American art from 1945 to the present day. Among the art movements featured are:
The Swiss artist Jean Tinguely with his kinetic Meta-Malevich reliefs. The Zero Group, including the German artist Günther Uecker, Yves Klein from France and Lucio Fontana from Italy. Artists who combine poor materials and spirituality, such as Imi Knoebel, Reiner Ruthenbeck, Franz Erhard Walther, Wolfgang Laib and the Japanese Noriyuki Haraguchi. Artists who have reacted to Suprematism with ironic detachment, such as Sigmar Polke, Rosemarie Trockel, the IRWIN group and the American Allan McCollum.

A crucial role in the reception of Black Square has of course been played by American Minimal Art, which – besides the work of Malevich himself – will occupy the largest amount of space in the exhibition. Major works by artists such as Ad Reinhardt, Carl Andre, Donald Judd, Bruce Nauman, Robert Ryman, Richard Serra and Sol LeWitt will be on show, demonstrating the fascination of the black square and the highly varied reactions of these artists to it.

All of the above-mentioned groups and individual artists have created works which refer in very different ways to Malevich’s Black Square. It is precisely the paradoxical combination of a radical reappraisal of painting through the black square on the one hand, and its religious and intellectual-historical origins in traditional icon painting on the other, which has enabled such varying interpretations and transformative appropriations of this icon of modernism.