About the possibility of a Sculpture

Without necessarily belonging to the category of sculpture, all works on view, installation, film, photography or performance, enter first and foremost into a critical reflection about the conventional ways of perceiving sculpture as a three-dimensional medium. 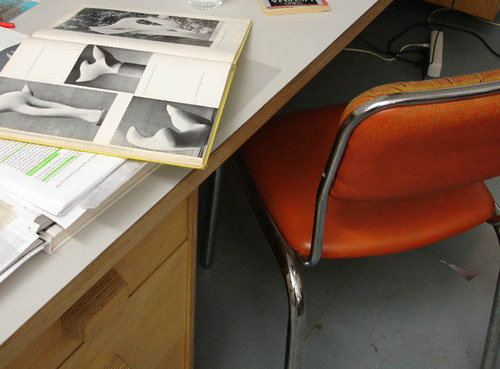 Traditionally we think of sculpture as three-dimensional objects, which distinguish themselves formally through their physical presence and the aesthetic qualities of the material they are made of. Abstraction, solidity and durability are other qualities usually associated with this medium.

Galerie Reinhard Hauff’s present group show, “About the possibility of a Sculpture”, curated by Philipp Ziegler, attempts through works by Gedi Sibony, Falke Pisano, Lasse Schmidt Hansen and Rosalind Nashashibi/Lucy Skaer to take a critical look at these conventional ways of perceiving an artistic medium, which for a while now enjoys increasing interest.

In an exemplary manner, the Dutch artist Falke Pisano, expresses this line of thought, reflecting on the different possibilities and ways of perceiving sculpture in one of her own pieces “A sculpture turning into a conversation”: “Things can sometimes turn into other things(...) Friendship can turn into love and the other way round, situations transform into completely different situations regularly, a book can be turned into a film, solid materials into liquid materials in many cases and sometimes into gas”.

From found materials such as cardboard, plywood, wall-to-wall carpeting and wooden sticks, the New York artist Gedi Sibony (*1973) creates reductionistic constructions, handling materials in a minimalist manner which retain traces of their original usage and nature. In his acclaimed installation at the 2006 Whitney Biennial, New York, where he used the discarded materials from the Whitney’s previous Robert Smithson retrospective, the sensitive aesthetic of the materials he used, combined with their historical reference to past purposes and identities, lent his installation - as well as the objects now shown at the Galerie Reinhard Hauff - a subtle poetic language which addresses as much our senses as our memory.

Falke Pisano (*1978), who was studying at Jan van Eyck Academy in Maastricht until the end of 2006, and parrallel to this show is participating in a group show at the Stuttgarter Künstlerhaus, is represented with a selection of works in which she reflects on the effect-mechanisms of modernist sculpture and their abstract form language through theoretical texts, models and lecture performances. The Danish-born Frankfurt artist Lasse Schmidt Hansen (*1978), who participated in a 2005 group show at the Galerie Reinhard Hauff, works with everyday design objects to re-think and reformulate standardised systems.

In these subversive-conceptual works the artist makes frequent references to minimalist sculptures of the 60’s. The 16-mm film “Flash in the Metropolitan”, shown in the entrance area of the Gallery, is the result of a collaboration between the two artists Rosalind Nashashibi (*1973) and Lucy Skaer (*1975) who will represent Scotland in this year’s Venice Biennial. The film - shot at night in the sculpture galleries of the New York Metropolitan Museum - liberates enigmatic objects from their nocturnal vitrine environment, to briefly restore them to their original splendour and beauty in the glare of flash lights and spots.