The artist works conceptually linking light, usually thought as an aesthetic medium, with social and political statements. The multimedia installation opening the exhibition, casting letters and numbers on the walls, refers to the region of the brain responsible for the ability necessary for language. 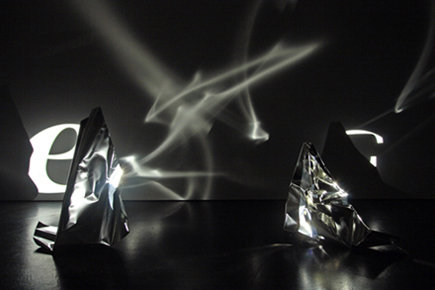 The international retrospective of Mischa Kuball, light and media artist from Düsseldorf, will open At ZKM | Museum of Contemporary Art with the multimedia installation »ReMix/Broca II (Letters/Numbers). Kubal’s extensive work "ReMix/Broca II," refers to Broca’s area, a region of the brain responsible for the motoric ability necessary for language. Together with the limbic system and Wernicke’s area, it builds the ability for language—the basic prerequisite for human communication. The various components of Mischa Kuball’s installation are set in such a way that they can be associated three-dimensionally with the respective cerebral areas. In the further development of an earlier work six projectors rotating at various speeds cast letters and numbers onto the walls of the room. A multitude of overlapping contexts from various semantic areas arises, generating the need to construct meaning.

The multimedia installation ReMix/Broca II (Letters/Numbers) will open the international retrospective of Mischa Kuball, light and media artist from Düsseldorf at ZKM | Museum of Contemporary Art. Kuball has worked conceptually with light for more than twenty years, and in a unique way has linked light, which is otherwise largely considered an aesthetic medium, with social and political statements. Within his complex and multifarious work, the pieces that confront human communication form a specific concentration.

"I am interested in language as a function of a code—that is, in the sense of coding and de-coding," says Kuball. Presented for the first time is the new, extensive multimedia installation ReMix/Broca II (Letters/Numbers), which is a further development of his earlier work, broca'sche areal. With both of these works, Kuball refers to the eponymous brain region, which forms language capability, and thereby the basic conditions for human communication. Taking six different rotating projectors as a point of departure, in ReMix/Broca II (Letters/Numbers), letters and numbers are cast on the walls of a room.

This leads to the chance overlapping of a multitude of connections of meaning from various semantic areas, which generates the need to construct meaning. In addition, sculptural elements in the room reflect the light of the projectors; these sculptural elements are the artist's digitized brain waves transferred to three dimensions. In this way, grasping, expressing, and representing thoughts are all connected on different levels as the preliminary stage of communication. "When language and light come together, the basic elements of knowledge are present" (Kuball).

ReMix/Broca II (Letters/Numbers) is a collaborative project by the Ruhr-Universität/Neuropsychologie, Bochum, the HfG Staatliche Hochschule für Gestaltung, Karlsruhe, and ZKM.

Artist Talk On 31 March 2007 at 4pm in the ZKM_Lecture hall there will be a discussion on "Art and Science" with Mischa Kuball, Peter Weibel, and Gregor Jansen and the artists represented in the related exhibition My Gene, It has Five Corners... .