A retrospective exhibition: works from the 1970s. Created in Rome, Delhi, Madras and Srinigar between 1971 and 1979, the approximately one hundred works in the exhibition document the development of Clemente's artistic vision. The works reflect the cultural and political context of Rome in the 1970s as well as Clemente's artistic, literary and musical influences. 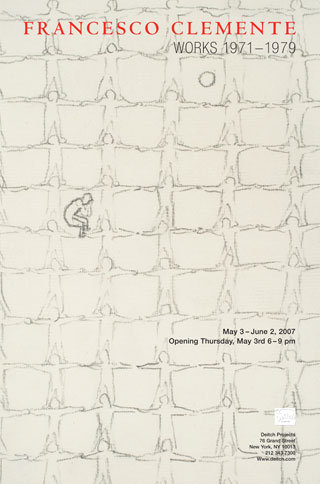 Deitch Projects is pleased to present a retrospective exhibition of Francesco Clemente’s work from the 1970s. Created in Rome, Delhi, Madras and Srinigar between 1971 and 1979, the approximately one hundred works in the exhibition document the development of Clemente’s artistic vision. The works reflect the cultural and political context of Rome in the 1970s as well as Clemente’s artistic, literary and musical influences.

Clemente cites two defining factors in the development of his early work, his friendship and dialogue with his fellow artists Alighiero Boetti and Luigi Ontani (with the spirit of Joseph Beuys in the background), and the 1970s political crisis in Italy. Clemente was also influenced by the Beat poets and by the music of Bob Dylan and other American musicians. The work reflects the impact of politics in a wider sense of the word. The American Minimalists, Conceptualists and Body Artists were very present in Italy in the ‘70s, but according to Clemente, it was a one-way street The Italian artists of the 1970s were working in the context of the terrorist generation. There was a sense of political crisis, a crisis of capitalism and a crisis of Western society and values. Artists were refuting the notion of producing products for capitalist consumption. In 1971 Rome was a cosmopolitan city filled with sophisticated exiles. By 1977, the city was gripped by the fear of terrorism.

Several major themes are developed in Clemente’s work of the 1970s. The first theme that the artist describes is the fragmentation of self. Starting with the self, the body becomes a territory for artistic exploration. The body becomes a border and the border leads to the idea of travel. Travel leads to a sense of flow. Clemente learned to trust geography over history, observing that history led to a dead end. He enhanced his knowledge of his body through a nomadic strategy; through physical travel and through travel through different levels of consciousness as well as through different media and techniques.

Another essential theme is diffidence toward Western rationality, a refutation of reason. Clemente was influenced by Allen Ginsberg and his circle’s travel to India and embrace of Tibetan Buddhism. At the end of the 1960s and in the early 1970s, artists understood that cultural Colonialism was over and that it was time to experience cultural alternatives outside of Europe and America.

Clemente’s work from the ‘70s was about process and concept, not about technical perfection. His drawings are never tight and mechanical. One of Alighiero Boetti’s precepts was that the artist should not even make the work himself. In a community where it was taboo for an artist to involve himself in the making of his paintings, one of Clemente’s concerns was to understand how to “smuggle the self back into the work.”

Paper was Clemente’s medium, both out of necessity and choice. He appreciated paper’s vulnerability and its ephemeral quality. In addition to drawings there are conceptual photographs, and in the late ‘70s, large works on paper laid down on canvas. The exhibition includes Clemente’s portrait of Foucault from 1978, an important work for the artist because he considers drawing very close to language. Many of his drawings involve puns and references to words.

Clemente’s first solo exhibition was in Rome at the Galleria Valle Giulia in December 1971. His first important public exhibition outside Italy was in Belgrade in 1974 where he showed with Marina Abramović, Joseph Beuys and Luigi Ontani. He later met Beuys in Naples, Basel and Pescara. During the 1970s his work was shown in Amsterdam, Basel, and Cologne, which the artist describes as the liberal cities of Europe. His first exhibition in London was in 1979. He traveled to the United States for the first time in 1980 when Tom Marioni invited him to make prints at Crown Point Press in San Francisco.

The exhibition will be accompanied by a 260 page book documenting Clemente’s works of the 1970s with an introductory essay by Jean-Christophe Ammann. The show is the third in a series of Deitch Projects exhibitions focused on the early work of major New York artists. David Salle’s Bearding the Lion in His Den, an installation from 1977, was re-created at Deitch Projects in March 2007. In May 2006, Deitch Projects presented Jean-Michel Basquiat 1981:The Studio of the Street.