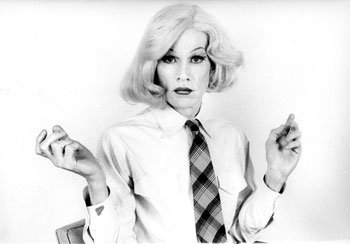 Yancey Richardson Gallery is pleased to present Warhol: Vintage Portraits, an exhibition of photographic portraits of Andy Warhol taken by Christopher Makos over a period of two days in 1981 as a collaboration between the two artists. Titled Altered Images, the project resulted in 349 different images featuring Warhol posed against a plain white studio background wearing women's makeup and wigs. The project, inspired by Man Ray's famous portrait of Marcel Duchamp posing as his alter ego Rrose Sélavy, coincides with explorations of identity, gender and role-playing by other artists such as Robert Mapplethorpe's feminized self-portraits and Cindy Sherman's Film Stills.

In Altered Images, eight different wigs, two different make-up applications and a variety of poses and expressions transform Warhol into an array of different female characters, several of which reference his portrait subjects from the worlds of celebrity and society. It is well known that Warhol customarily wore a man's wig of blonde hair. As Ingrid Sischy, editor of Interview magazine, wrote in the book Andy, Warhol was "like a chameleon...I've always thought that in one way or another Warhol was always in a kind of drag."

Born in Lowell, Massachusetts and raised in California, Makos apprenticed with Man Ray in Paris as a young photographer. In 1977, Makos published White Trash, a collection of photographic portraits of the New York contemporary culture scene from celebrities such as Liza Minnelli and Halston to protaganists of the emerging downtown punk scene such as Debbie Harry and Patti Smith. In 1979, Makos art directed Exposures, Warhols' first photography book. The complete Altered Image project was published by Charta and Edition Bruno Bischoberger in 2001. Makos's latest book Warhol/Makos in Context was published by Powerhouse Books in 2007. Makos' photographs have been widely exhibited in Europe and the U.S. and are currently on view at the Museo Reina Sophia in Madrid.