The objective of the project is to draw attention to the history of the Dutch city of Harderwijk. To achieve this goal, 8 artists have been invited to produce artistic research projects related to a number of significant locations chosen in collaboration with the historical society Herderewich. Asked to develop specific proposals underscoring the above problematics in an artistic form, they present projects in which a number of related issues and topics emerge. Curated by Henk Slager. 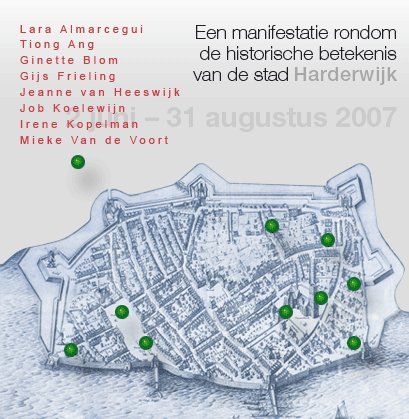 The Freedom of Public Art in the Cover of Urban Space

The objective of the Shelter 07 project is to draw attention to the history of the Dutch city of Harderwijk. To achieve this goal, the genealogical significance of the name Harder-Wijk, "an elevated place offering a safe shelter to refugees in troublesome times", serves as the point of departure for the exhibition in public space. That genealogical significance causes notions such as safety and freedom to appear inextricably bound to Harderwijk's history. But how did that connection arise? Is it still linked to a spatial, site-specific concept with phenomenological connotations of physicality? Or does a medial, discursive relationship transform the current concept of "place" into a textual issue, i.e., a notion of place as a platform of knowledge and intellectual exchange?

To investigate these questions further, eight artists have been invited to produce artistic research projects related to a number of significant locations chosen in collaboration with the historical society Herderewich. The artists were asked to develop specific proposals underscoring the above problematics in an artistic form. Interestingly, in their projects, a number of related issues and topics emerged.

In order to understand a location"'s specificity, Lara Almarcegui employs an archeological method eliciting that precedes space, i.e., the granting of room. On the Blokhuisplein, a historical location renowned for its straightness and power, she will create a fallow field presenting a temporary autonomous zone as a dysfunctional, undefined, and unfounded space escaping the grid of geography. At the same time, the autonomous zone is able to shelter the experience of a total freedom of interpretation.

As a location for his intervention, Tiong Ang chose the former lodge of the duty officer of the colonial yard depot, the building where volunteers for the Dutch East Indies were recruited. The lodge is situated next to a monumental gate that, thanks to the house of ill repute once situated just outside, seamlessly connects two former literary worlds of bourgeois escapism: the reality of Keetje Tippel, a famous woman of easy virtue, recorded by Neel Doff; and the contours of colonial reality, sketched by Multatuli in Max Havelaar.

Ginette Blom's intervention brings us back to a medieval conception of freedom incorporated to some extent in the double function of the 13th-century Vispoort (Fish Gate). As a crucial element in the fortress structure, this building served initially as a defensive post and lighthouse. However, at the gate"'s sea-facing side, there was also a quay where fishermen could freely sell part of their catch. By means of a nighttime light projection on this historical location, a filmic memory of this pre-capitalist free trade site is evoked.

Gijs Frieling rewrites the history of the port as a freewheeling place of leisure in the form of an allegoric mural near the pier. Until the early 20th century, Harderwijk's economic independence relied to a certain extent on the presence of the (fishing) port. With the arrival of the Zuiderzeewerken - turning the greater part of the South Sea into a polder - Harderwijk's economy seemed to run aground. However, the sudden arrival of a group of dolphins at the dock entrance turned out to be the beginning of a new period of economic vigor.

Jeanne van Heeswijk (in collaboration with Boris van Berkum) developed a series of wallpapers placed on the bricked-up windows of old houses around the church square, retelling last century's lingering tales: about the symbolic poet Rimbaud, who lost his identity as a poet during his stay in Harderwijk and vanished in the grand myth of the foreign legion; about the first big stream of (Belgian) refugees who found temporary shelter during World War I in camp Harderwijk; and about the circulating rumors of missing passports popping up during the transformation of the AZC (Refugee Center) Jan van Nassaukazerne into luxury condominiums, as proof of the search for shelter in a new, safe identity for its former inhabitants.

At the spot where, till the late 1970s, the strictly Protestant "church school" (Vismarktschool) was situated, the city of Harderwijk has recently constructed a natural water reservoir. Job Koelewijn considered this an ideal place for his intervention. He put the stream of rising water and all its connotations of Flood, chastening, and eternal return into the liberating perspective of some hundreds of Great Books.

In the City Museum, Irene Kopelman investigates the 18th-century position of the University of Harderwijk as refuge for thought through an artistic interpretation of Linnaeus' botanical classification system. Just because this university did not choose for a dogmatic movement of thought but rather was open to a variety of epistemological perspectives, it was a safe haven for unorthodox intellectuals from all over Europe.

In the context of Shelter 07, Mieke Van de Voort stays temporarily in Harderwijk in the Zeebuurt area, where she develops a new work in a typical 1950s row house, icon of radical mediocrity. Here freedom seems to be entirely reduced to a one-dimensional concept. Yet, inevitably the question arises: could something cooked up in an anonymous row house ultimately prove meaningful for the balance between freedom and safety?

Parallel to the Shelter 07 presentations in urban public space, the Catharinakapel (Klooster 1) will serve as the source of Shelter 07 information during the summer of 2007, supplying information about the participating artists, the artistic research projects, the work processes and the historicity of the chosen locations.