Recent projects / Periferiak07, a programme of projects that is being developed in public open and institutional spaces within the urban environment 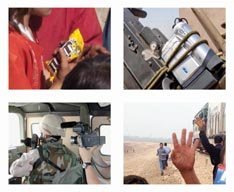 Sean Snyder's exhibition at sala rekalde brings together a series of recent projects outlining his research based artistic practice.

Having worked with extensive case studies involving the ways ideology and the media shape architecture and urban planning, Snyder's recent work has focused on the processes of the media, visual aspects of political representation and the actual mechanics of image production.

The projects presented in sala rekalde, focus on these recent developments in Snyder's work. The exhibition outlines the artist's methodology and use of archives, opening up source material to the viewer’s examination.

Works in the exhibition include:

Analepsis (2003-2004) is a video that works with the depiction of location in satellite television news broadcasts. The short sequences are comprised of re-establishing shots (reminders or updates on scene changes) used to visually orient viewers to the geographic location of a report. The footage, isolated from sound and narrative, is edited into a continuum according to camera techniques, exposing the cinematic language inherent in news coverage.

The Site (2004-2005) is a text and image based work that analyses various reports produced by governmental information services and western news media upon the capture of Saddam Hussein. Overlapping accounts and visual evidence produce similar, but inconsistent depictions of a restricted place and incident that no longer exists in reality. Questions of accessibility, timing and the relation of reporters to their subject bring into question the newsworthiness of the material.

Untitled, (Archive Iraq) (2003-2005) consists of thematically grouped amateur images produced by military forces and contractors excavated from digital file-sharing sites on the Internet. Exposing a layer of what would remain largely unseen pictures, overt representations of war and violence are excluded, focusing on the banal subjects of amateur photography. Presenting a perspective different from that of the embedded reporter, the selected subjects evoke notions of tourist, classical and criminal photography.

Casio, Seiko, Sheraton, Toyota, Mars (2004-2005) is a video essay that combines still images and video footage from amateur, governmental and photojournalistic sources with an essayist commentary. Exploring the conventions and ethics of photojournalism, the video outlines decades of foreign corporate involvement in Iraq and Afghanistan.

Schema (Television) (2005-2007) is an ongoing project that questions television’s authoritativeness as a source of information. Working with categorical indexes of programming themes from satellite television, the video utilizes the potential of the remote control as a device of unpredictable montage. Using Dziga Vertov's (with Rodchenko's subtitles) silent newsreels (Kino Pravda) from the 1920s as a formal and editing model, the video emphasizes impossibility of attributing truthfulness to the moving image.

Optics.Compression.Propaganda (2006-2007) is the general subheading for a series of experiments working with image production and the role visual technologies play in the construction of ideology. The Carl Zeiss Archive serves as a conceptual framework for the project, illustrating the importance of optical devices in recent history.

Sean Snyder was born in Virginia Beach, USA in 1972. He lives and works in Berlin and Kiev. He has exhibited extensively with solo exhibitions at the Secession, Vienna, Portikus, Frankfurt, De Appel, Amsterdam, Neue Kunsthalle, St. Gallen, and Lisson Gallery, London.

To accompany the exhibition, sala rekalde will publish a book with essays by Magali Arriola, Olga Bryukhovetska and a conversation between Sean Snyder and Leire Vergara.

From June 21st to July 29th, the Abstract Cabinet of sala rekalde will be showing the group exhibition If you go, write me when you get there, within the framework of Periferiak07, a programme of activities with base in Bilbao.

This exhibition corresponds with the second part of an already begun workshop in the civic centre of San Francisco, Bilbao. Taking the practice of editing as the subject matter, this proposal adopts a mixed form of workshop and exhibition. The overall compilation will offer a spatial and conceptual framework in which public presentations and closed sessions can take place, and pooling videos, installations, photographs, drawings, publications and objects, offered by five artists and collectives: Discoteca Flaming Star, Karl Larsson/Frans Josef Petersson, Jon Mantzisidor, Peter Piller and Isidoro Valcárcel Medina.

Parallel with this exhibition, there will be a series of presentations, performances and conferences.

According to the Oxford American Dictionary, the two senses of the term edere are “to publish” and “to produce games”. The combination of these meanings provides a fine definition of the act of “editing”, derived from the Latin root: openness to the endless possibilities of play through taking on social responsibility within the public sphere.

The exhibition and editing workshop Si vas, escríbeme a la llegada / If you go, write me when you get there is being presented in the Abstract Cabinet of sala rekalde within the framework of Periferiak07, a programme of projects that is being developed in public open and institutional spaces within the urban environment. The programme is structured this year around the idea of edition. It all began in Livorno in 2003 and, amongst others, participants have included Joaquim Jordá, Jorgen Leth, Paolo Virno and Emine Sevgi Özdamar.

If you go, write me when you get there also includes publications by the artists involved in the exhibition, as well as the editions of sculptor Jorge Oteiza’s book, Quousque tandem…! Ensayo de interpretación estética del alma vasca / Quousque tandem…! Essay on the aesthetic interpretation of the Basque soul. The latest of them is a critical edition co-edited in 2007 by Jon Etxeberria Plazaola and Amador Vega.

The proposals covered by the Abstract Cabinet share references in common: the irreducible nature of text, translation as a form of resistance, autonomy as a condition of art to question the social, and edition as a response to the anxiety brought about by the accumulation of culture.

The programme for 2007 involves other independent projects: Editing workshop, a space for work and discussion around the idea of edition which took place in May in places such as San Francisco Civic Centre, Anti-Liburudenda and AmatauTV; Copy Your Idols! (www.copyidols.net), an audiolab about the process of appropriation in audio that will take place as part of the UPV/EHU’s “VIII Encuentros Bilbao Arte eta Kultura” in June and, later, in Arteleku in July; Bilbao es una mala copia / Bilbao is a poor copy, a series of interventions and incursions into urban space led by the scenic arts collective Zubiak, between the end of May and the beginning of June; and Kalejira/Pasacalles. Bilbao a través de sus canciones / Kalejira/Pasacalles, Bilbao through its songs, conferences in the Auditorium of Bidebarrieta, walks and performances following the history of the city in other places, from 1 to 6 October.