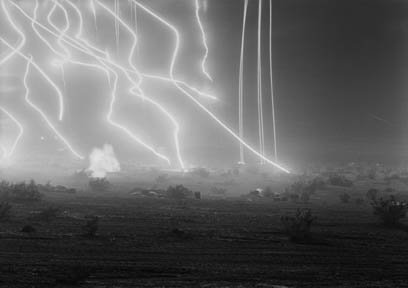 This exhibition comprises two photographic series by An-My Le that explore the military conflicts that have framed the last half-century of American history: the war in Vietnam and the current war in Iraq and Afghanistan. The artist approaches these events obliquely. Instead of addressing her subject by creating reportage of actual shocking events, she photographs places where war is psychologically anticipated, processed, and relived. Her series Small Wars (1999–2002) depicts men who spend their weekends reenacting battles from the Vietnam War in the forests of Virginia. Le’s current series, 29 Palms (2003-present), documents a military base of the same name.

Located in the California desert, it is a base where soldiers train before being deployed to Iraq or Afghanistan. These dramatizations of war—one a reenactment, one a rehearsal—allow her to create a unique kind of war imagery: unexpected, removed, and revelatory.